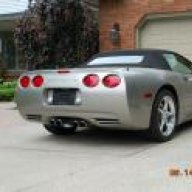 Need info on history of this car, any thing I need to ask or look for.

Not to much knowledge with these older Vettes.

Owner says it has a chip out of back, radio does not work, needs seat covers and more than likely other things.

How much is it worth approx.

Take it to a Corvette specialist for an inspection, it's worth a few hundred bucks to avoid buying a worthless dog.

If this is a long-term Canadian car, it will probably fit into one of two categories

1) always stored for the winter and is in pristine shape

2) Bubba drove it year round, even in salt and snow and the poor thing should be now put out of it's misery

If the engine was rebuilt, confirm that the engine stamp pad info was not disturbed. If it was, the car is not really 'numbers matching' (I hate that expression) and should be priced accordingly.

The fact that it's not the original colour is a minus.

Very hard to guess value without knowing condition. If the thing is a dog, it would not be worth buying at any price above scrap value (1K?) if it's actually a gem maybe 10K. 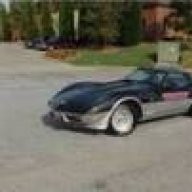 i agree with mikey, rust is the killer here, and being a canadian car (assuming it spent it's life north of the border) winter treatment would be important to get a handle on. how long has this guy owned the car?? is he just trying to flip it and make a few bucks?? if so, stay away as he probably knows less about the car than you do. how much hard documentation can he provide you with other than word of mouth?? what are your intentions in owning the car?? a driver?? rebuild to original?? show car?? all things you might need to consider based on condition and asking price. one thing you can count on, you will spend a decent amount on any restoration or repair you undertake even if it is just for replacement parts. be prepared to deal with it on that level if that is your intention. BTW just for your info a decent set of replacement seat upholstery with new foam, etc will run you over $500.00 just for starters leather even more..

pricing is geographical. a really nice slightly better than driver condition 79 in my area (south florida) isn't bringing the 10K mikey mentioned. high end down here is a bit under the 10K level. that does however vary by location, so it's impossible for anyone to give you a number.

check around the local cars for sale ads in your area that should give you at least a feel for the price ranges.
steve

Look for rust under the T-tops, window pillars, door jams, and frame. Check to see how the rubber weather stripping is holding up. Get the car up on a lift if you can and check the suspension , springs, etc .. just my two cents.

I will be looking for rust. The owner had bought it from his Brother in-law in 1984 and has owned it since. I have a feeling it will need some work. He is asking $5000.00 US and is located in the Buffalo New York area. I was thinking of offering him $3500.00 if I thought it had potential.

After reading the posts , maybe I should wait and find something with lower mileage in near mint shape. I know I would want the car in very good condition and would end up spending to much to get it there. If it is a good daily driver maybe I can have some fun with it and drive it to its grave as long as it is not to rough. Confused, but once I see it next week I can better make a call. Thanks.
C

Just as a basis for comparison, I paid 7500 for my 79 L-82 4 spd last Halloween day. It had a rebuilt engine so the owner claimed, but he never produced paperwork. It does run like a rebuilt engine though and I took someone with me much more knowlegdeable than me to verify. Mine has the matching #s engine, the interior is in very nice shape, he had thousands of dollars of reciepts for interior pieces. He had receipts for about $1500 in front suspension work. Brand new tires. The car also has Hooker headers, a larger than stock cam, flowmasters and a Hurst shifter, all pluses to me. The downside was the black paint was as spider cracked as Ive ever seen one, the car was from Texas and had spent most if it's life there. I picked it up and drove it 1.5 hrs home wiht no problems whatsoever. Some more details I can think of, the power windows and locks work, the A/C compressor comes on, it just doesn't blow very cold. The windsheild and dash pad were cracked. It has a pretty nice CD stereo in it. It's since been painted and I've fixed a lot of minor things and have about 12K in the car.
79 L-82 4 spd, black, red interior, headers, flowmasters, bigger cam
70 C-10 shortbed stepside, hot rodded inline 250, 3spd
You must log in or register to reply here.

GM Press Release: CORVETTE RACING AT LE MANS: 20 Years In Their Own Words