I previously put out a topic regarding members opinions on the appearance of the 50th Anniversary edition and somehow the topic mysteriously disappeared.Let me try again.Lets take a canvass here and see what the members think about GM's effort to celebrate 50 years of the Corvette Mark. I say they made no effort at all. I think they repeated the drab burgandy whine routine they put out for the 40th.BLAH! The 35th was a knockout, the 40th was boring and the 50th is a plain jane at best. Why not a knockout Nassau Blue with an all white interior? Give the convertible a white top! And hey if you want to see the car a block away you can add white painted wheels!:J Even if GM used the 53 color combo of Polo White with red leather interior would in my opinion be a vast improvement over what they came out with.50 years and that's it? GM
That's only my opinion, what's yours?

Lou, I merged the two posts you made. Why have two? Or as the case may be now - three.

I have a 35th Anniversary and I think it's an okay car. There were only 2050 of them made and who knows how many are still out there and running. I don't think that it's really any more special from the other Corvette's except for the cosmetic differences, which really make it stand out.

The wheels are painted white and I have the decals on the side. At first glance, it doesn't really look much different from other C4's. But I enjoy my car, and for what I paid for it, I'm extremely pleased.

As for the 50th, I think a lot of people have been disappointed. People were expecting big changes and really just got some cosmetic work and that magnetic ride thing. They didn't even make a special Z06 50th anniversary car. They could've done so much with a 50th anniversary Z06, but chose not to.
Edmond.

I had an 1988 35th Anniversary edition myself and recently sold it with only 1,100 miles on it and I beg to differ.The car was gorgeous and cosemtically worthy of being a special edition. I sure could SEE:eek the difference between the 35th and the regular coupe.I do not see this difference with the 50th and the regular fleet I'm sorry to say.:cry

PS Ken
The reason I had two topics on the same subject was because I wanted them to post in two different areas: the C5 forum and the 50th Forum

Well Lou, I was going to split 'em again, but there is only one in that thread now. Either another moderator deleted the copy or you did. I didn't. :confused

I believe GM missed a great opportunity to make the best anniversary model possible today. It sure made my decision easy not to order a new 50th Anniversary and just order a "regular" non-aniversary model. 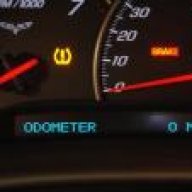 Not sure what they were thinking.... I thought Bob Lutz was going to do something spectacular for the car. I hope that this is not a glimpse of things to come in the future for Corvette. I was disappointed at first, but it grows on ya especially when you see and hear the pace car at INDY. Now that was awesome!!!! I think that GM wanted a car that every one could enjoy, not just the ones that have a lot of money. If it was totally awesome and GM only made 500 of them, I would never even get a chance to even see one, let alone ever have a chance to own one. All in all, not bad but it could have been a he$@ of lot better!!!!!!!
D

I think that the 50th should be a special model like the other but better because it is the "Golden Anniversity". They should put more power in it and make it a limited model. Just my opinion.
B

I was planning to trade my '99 Nassau Blue convertible in for the 50th anniversary edition, but besides the fact that they don't offer that color anymore, there is nothing "special" about the anniversary edition that would be worth it.

They missed a huge opportunity!
L

Blue99 I just read your thread regarding the crack at the seam on your muffler on your 99. Guess what? same problem on my 99.Solution? I am replacing the exhaust system on my 99 with the titanium zo6 exhaust system, by my local Chevy dealer.
PS
Anyone who would replace a Nassau Blue Convertible with a DRAB 50th Anniversary edition would have to have their head examaned!:crazy
D

I most heartilly agree

What a cool color! Every time I look at it I'm glad I got it all over again. Personally I think it looks better than the electron blue that I passed up (not to mention the extra 30 grand that it would have cost) to get it. I used to believe that the only good corvette was a red corvette, but this nassau blue has changed my mind.
--Drew

Funny you should mention that

I just saw a white/red 63 for sale right down the street. It has 37,000 miles on the odometer (I'm not sure if that is original) and he wants $30,000. If you are interested I can talk to the guy--he is a customer of mine and might be talked down...he has several vettes.
--Drew

Thanks Drew,I appreciate the offer man! If this 1 dont pan out ill give ya a holler,,,btw? where is nowhere?/lol!>>> http://www.contes.com/63split.htm
D

Indiana is nowhere. I'm not exactly in the middle of nowhere, but you can see it from here.:L
N

I appreciate all of you guys not buying the 50th. Should make mine go up in value.

BTW does anyone like Corvettes? If I was searching for some input about buying a Corvette and came upon most of the Corvette websites I would have to think that these are the worst built cars in America.

I have heard that the engine does not have enough power, the transmission is junk, the paint is no good, the tires are terrible and that is just the major things.

Does anyone like the car as they got it from their dealer?
B


NEWLY03 said:
Does anyone like the car as they got it from their dealer?
Click to expand...

I love BOTH of mine.

It seems like all you hear about is the problems. Maybe these people should spend less time on the computer and more time driving thier Vettes. I average 15k a year on mine. Not one single problem with my 98 coupe and it is coming up on 60k. Yeah it could be faster but there is ALWAYS someone who's faster than you. Learn to live with it . Face it, we have the best production car made for the dollars spent. Actually the best car for twice as much as we spent on them. By the way I like the 50th. Gm could have done a better job but what do you want. a Ferrari?
R

I think that once the car hits the lot a lot of people will be supprised. JMOH
You must log in or register to reply here.