Hello Corvette owners!
I had the passenger side fuel injector dripping and ordered a set of injectors from Standard Motors. Also, I bought 2 new fuel pressure regulator gaskets since I would be disassembling both throttle body covers would be an opportunity to change those also.
Well, the problem was not the injector but it’s lower oring been deteriorated, anyway I changed them both. It was not mentioned which injector goes to the rear / front throttle body, so I had to email my seller to confirm.
The surprise was that the rear (driver) side TB regulator gasket had a small spring operated valve, while the new one did not, see my attachment.
I thought that they are a direct replacement however, and so I proceed to fit the new ones. I have not changed the position of the fuel pressure regulator spring, it is not adjustable anyway, also by no means have not changed any of the TB synchronization, linkage shaft etc. I was very careful.
Put back everything together, reinstall battery and start her up. The injector spray pattern now was very clear and not any smell from rich gas condition as it used to have.
But although that it takes her a couple of minutes to warm up, and rpm’s fall to about 600, idle will in between do about 3-4 sudden drops to about 500 rpm, were it almost dies and raises again up quickly, when she warms up idle is stable.
I only start the car 2 times to be sure of that condition, and I do not know the cause.
Would it be that the IAC valves need some time to readjust with the new mixture, think not as I have removed battery for the procedure.
The new fuel pressure regulator gasket is not a direct replacement, so we need to go through the fuel pressure regulator adjustment? That is something I would try to avoid as it involves a pressure meter installation in between both TB fuel supply line, and hacking the bolt of the regulator so it can be adjusting with a usual screwdriver.
Actually, if fuel pressure is lower than what is supposed, will it be a cause for that behaviour?
Both the new fuel pressure gaskets looked identical, not any clue of one goes to the front and the other to the rear TB.
I searched a lot but a fuel pressure regulator gasket with a valve like the original cannot be found anywhere! 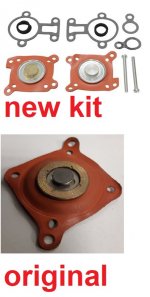