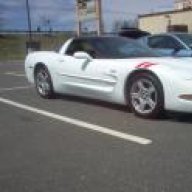 Hello,
I have to replace my opti-spark distributor on my 94 coupe. I know that the water pump has to be removed to do so, so I am replacing that as well. Now my question is does the distributor have to be calibrated or neutralled out, or does it just pop in. IIf anyone has done this job before and could give me some pointers or procedures to do it, I would greatly appreciate it
A

I got a 95 vette and just this winter replaced it with a msd opti spark the bigest problem i had was getting a the last screw behind the balance i ended up pulling the whole motor which made it alot easier but it took me some time. I just made sure of the location of everything when i pulled it out and a clitions manual explains pretty good about putting it in car runs good and i didnt make any adjustments
P

This is from a previous search that I used in CAC. Hope this helps. http://corvetteactioncenter.com/tech/c4/optispark.html


This article was written by Mike Chaney who is a contributor to the F-body Listserv. He has done an excellent dissection of an Optispark distributor which appeared on 1992 - 1996 LT1 Corvettes. Below, he describes the replacement of an Optispark distributor on his 1995 Pontiac Trans Am. Keep in mind that the replacement *is* conducted on a TA and not a Corvette so there may be differences.
​
The photos on this page are of a 95 Optispark. The unit is held together with inverse (male) Torx screws. The easiest way to remove them is to get an old Torx screw out of something and hold the screw with vice grips. You can then fit the screw over the head and turn it. All screws have been removed in these photos to make access easier. This page is for your information only. What you do with the information here is up to you. I figured a lot of people would benefit from seeing one of these things opened up. Above is the Optispark with the outide facing the camera (the side you see from the front of the engine). When we flip the Optispark over, we can see the center shaft with the three large recessed (circular) grooves that fit over three bolts when installed. The small indexed groove fits over a single pin (it will only go on one way). When the four inverse (male) Torx screws are removed, the outer half of the Optispark reveals all eight contacts and the rotor contact in the center. The other half (inner part facing the engine) reveals the rotor (attached with two very small Torx screws). The rotor spins freely. With the rotor removed, the plastic cover behind the rotor can be easily pried up to reveal a large metal cover (marked metal plate in the photo). The large metal cover comes right off to reveal the real guts of the beast. It is difficult to see the slots on the slotted disc because they are so tiny. The slotted disc passes through a slot in the photo emitter/receptor. The slotted disc (very thin) pops right off, revealing another thin disc underneath. Both of these are held on by the rotor bolts. A closeup of the main guts of the Optispark makes it a little easier to see the slots in the disc, and how the disc fits into the slot in the photo emitter/receptor.