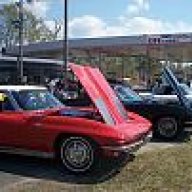 Hello everyone, I recently purchased a 1997 Coupe and have a question about the color/ interior production information. The color is Light Carmine Red Metallic, and the interior is Firethorn Red.

I know in '97, 381 cars were Light Carmine Red Metallic, and 728 were produced in the Firehtorn Red interior.

Hi, bbvette, and welcome to the

As I'm guessing you've realized, the CAC's model center can provide you with the final production numbers in '97 of how many Corvettes were produced with the Light Carmine Red exterior, or how many produced with the Firethorn Red interior, but it doesn't coallate both into one list.

Off hand, the only place I'd say you could find information that specific concerning final production numbers would be the National Corvette Museum.

Hi bbvette - welcome to the CAC.

In the 2004 edition of Mike Antonick's Corvette Black Book, there is a section on extrapolation. He defines it as using what you know to guess what you don't.

As Patrick suggested, the NCM may have the information you're searching for, but until then you can extrapolate an answer based on the production figures from the CAC 1997 Model Center spec page.

According to the Model Center figures for 1997, total production was 9752 coupes (including pilot and prototypes).

The number of Firethorn Red interiors produced was 728. That's just under 8 percent of total production.

This is a ballpark figure at best, but it's an educated estimate.

Thanks for the greeting

I tried the Corvette Museum, but I was told they couldn't help.

As for the estimate of 31... thanks! Thats gives me something to work with, and it also motivates me. Thanks again