I am on the verge of ordering '78 Pace Car front and rear spoilers for my '79 from Eckler's. I am not sure whether I should order the one piece fibreglass front spoiler or the urethane 3 piece front spoiler. I am worried about the fit of both. Anyone with experience with either, or advice about either (or Eckler's), please, please reply to this posting. Also, do I need to order any kind of mounting hardware?

I agree with Tyla

I haven't had any experience installing aftermarket parts, but if you're concerned with purchasing 1978 items for your 1979...I feel that Eckler's provides good service, and the 78 and 79 bodies are the same, so the fit should be okay. Each vehicle is individual, and I am sure some fitment is required, but I don't envision it being bad at all considering Eckler's is primarily a Corvette supplier.
Silver
X

Thanks people! This is the kind of info I need.

I was looking to do the exact same thing for my 79. I can't afford it at the moment but i did do some research and mid-america has or had (not to sure) a special on the front spoiler, rear spoiler and skirt for about $800 bucks. I compared and it was the best deal at the time. You might want to check it out

Hope that helps out save some money, let me know how it turns out!
V

I'll check 'er out. Thanks. 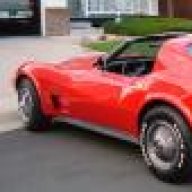 Hey Vettboy, I was doing a search on the Forum section about adding the D80 Pace Car Spoiler Option that was offered in 1979 to my '79 Vette.

I don't know the dates of this postings or how old it is, but am interested in how you came out on the spoilers for your '79.

"Tis a Privilege to Live in Colorado"
V

Believe it or not, it tooks many phone calls (several unreturned)and a few months to receive the spoilers from Eckler's after they were ordered. It seems first they failed so ship them to me, after charging my VISA card immediatly, or course. Then the three packages (front spoiler, rear spoiler and a drink tray) hop-scotched back and forth across the States a few times (really!) before finally entering Canada and arriving at my door....on three different days. By then both spoilers needed some bodywork. To be honest, I found them to be a little rough and the fit was "fair". I expected better for the money I paid. Now that they are installed and the car is painted, I must say they have added quite a bit to the look of the car. I'm very glad that I put them on and would most certainly do it again. I just wish there were more Corvette suppliers in Canada or the American suppliers had showroon/retail outlets in Canada to help with shipping hassles.