C3 Corvette's have a terrible Coefficient of Drag ratio....

I was running some numbers through Car-Test...crappy aerodynamics, even though they look sleek.

Cliff notes: If you've got an LT1 C4 with less HP than a modified C3 beast, chances are the LT1 will still have the higher top speed.

Unless you want to lean the windshield back, taper down the voluptuous Coke bottle fenders and smooth out the sides... hey wait a minute, I just designed a C4:L. There is no bolt on be all, end all solution to that dilemma, it's all about the evolution.

IMHO, that's just one more challenge for us C3 folks to take to the table.
- Eric

"He is your friend, your partner, your defender, your dog. You are his life, his love, his leader. He will be yours, faithful and true, to the last beat of his heart. You owe it to him to be worthy of such devotion." - Unknown
H

lol, hell no! those curves are staying
M

The drag coefficient is not so bad....


... It's the price coefficient that bothers me!

HighlyFanatic said:
lol, hell no! those curves are staying
Click to expand...

150 mph is way fast no matter what you are piloting! the c3's are the best stand-outs in a crowd anyway, everyone loves those lines. just spend some money on some ponies and forget the drag rating. air won't hold 500+ hp from reaching top speed, just the gears get too small!! i wonder if the c3 would suffer from the viper's problem of becoming airborne at high speed?? does anyone know??
J

AKRAY4PLAY said:
i wonder if the c3 would suffer from the viper's problem of becoming airborne at high speed?? does anyone know??
Click to expand...

Whoever told you the Viper has a problem of becoming airborne at high speed is highly misinformed; countless hours were spent in the Lockheed wind tunnel and on the 5-mile oval to produce the aerodynamic shape, the contour of the rear deck and spoiler lip, and the front fascia, spoiler, and high-pressure vent louvers in the tops and sides of the front fenders to make the car rock-stable over 150mph, because the car is capable of 192mph in stock form and we knew some owners would utilize that capability when given the opportunity.

I rode shotgun/navigator in a dead-stock Viper coupe (except for a roll cage and fire system) in the 1998 Silver State Classic Open Road Race in Nevada, 98 miles round-trip; we averaged 171mph for 49 miles on the way up, and 177mph for 49 miles on the way back, with no drama, and A/C for comfort. No other non-modified production car on the planet under $200,000 can perform like that and be driven home.
John
'67 Convertible
S

I think if you add that front and rear spoiler it helps out with the drag coefficient.


Buy yeah you guys are right, you gotta love the curves of these babys. The sharks seem to be more popular because of them!!
J

Aero drag coefficient is a function of the car's shape and its overall frontal area, and there isn't much you can do to an existing production car to reduce either one without getting pretty radical (and expen$ive). The Viper has a lousy drag coefficient due to its frontal area, but the shape is carefully tuned to manage and balance lift and downforce at each end.

Spoilers will always increase aerodynamic drag, but can be useful in managing lift; most of them do nothing worthwhile under 100mph, except the front deflector under the fascia on C3-and-later Corvettes, which are designed solely to divert air into the radiator at highway speeds. Without the deflector, most will either run hot or overheat on the highway; Corvettes were the first production cars designed as "bottom-breathers" for cooling airflow.
John
'67 Convertible 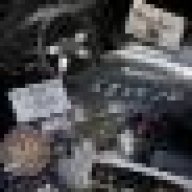 wonder if the c3 would suffer from...becoming airborne at high speed

Our C3 race car did not suffer from aero problems. It was very stable at high speeds (approx. 165). It did, however, suffer from chassis flex and being heavy (2900+#) compared to the tubeframe cars it had to run against.
Dave
'71 T-Top, Big Block aka Bruiser
http://www.tropiczoneracing.com
You must log in or register to reply here.