Perception of the buyer. The '69 model year was the longest in C3 history, while the '70 model year was the shortest. Some folks feel the '69s were an improvement over the '68s and the '70 models were the last of the breed before federal emissions standards began to affect horsepower. There is a bit of truth to this, but not all that much.

You are likely to find more '69s on the market than other model years only because there were more of them made and you will find more coupes than convertibles. The opposite is true for the '70 models -- less of them.

A good deal depends upon what a potential buyer wants. Most folks have a favorite model year and tend to want their favorite. 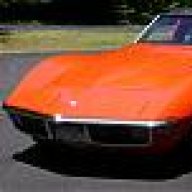 68's were the first year for the Shark C3 body style. There were numerous changes during the build so for someone who is doing a restoration to stock there are many one year only, or part of the year parts that are impossible to find and costly if you do. Also the 68 was plagued with some quality control problems but that should not be an issue today some 40 years later. I would think they would all be resolved by now. But then again perception becomes reality making that year less desireable to some.

Because of a strike in late 69 the 69 model run was the longest and the 70 was the shortest. In 70 they only produced about 17,000 cars the smallest Corvette production since the late 50's I believe.

Polution regulation controls started to take their toll in 71 and increased again in 72. The result was reduced HP ratings and increased smog controls choking the engines. Therefore the most desirable chrome bumper Stingrays are the 69 and 70 model years. The laws of supply and demand then kick in. The most desireable = the most expensive.
C

If you dont care about matching numbers or if you are going to put in your own motor,it will make no difference if you get a 70,71,or72.They are (almost) identical cars anyway.
C

That's right. I don't care about matching the numbers and the horsepower rating is not very important either. I'll look for a 71 or 72 since those appear to be more affordable. Thanks for the help!!!!!! 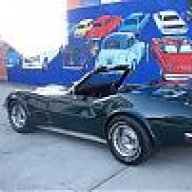 Perhaps the demand for 72s is driven by the fact that they are the last of the chrome bumper Corvettes. Very little difference technically between 70, 71, and 72.

Along with what has been said above, the earlier years you were looking at may have been more because of their engine package. A 427ci L71 '69 is going to be substantially more than a base 300hp 350ci base engine.

Evolution1980 said:
...Since you aren't concerned about stock originality, I'd definitely go with the one that best affords your budget, with a slight inclination to the later years if only due to engineering changes that may have taken place in any area.
Click to expand... 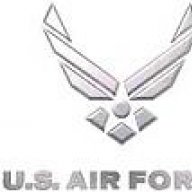 Whatever you do, buy the car you want that fits your budget. I was fortunate enough to stumble onto a '69 Fathom Green Convertible a few years back and got it for less than $13K; and although I wasn't a big C3 fan, this one really caught my eye (loved the color scheme and the chrome) and I bought it a few days later. I've become a big early year Shark fan now It's far from perfect, but the car draws attention whenever I can get her onto the road, which isn't enough, lol. I wouldn't buy anything because someone else thought it was valuable or rare...just look around and you'll find you car...at your price. 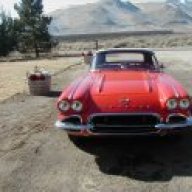 I think the c3 verts are the sharpest vettes there ever were.
A Proud U.S. Navy Veteran