Can 1 of these boys win from the back today?

The cars of defending NASCAR Nextel Cup champion Johnson and series points leader Gordon failed inspection and were barred from all activity for the day at Infineon Raceway, including qualifying.

NASCAR said the No. 24 and No. 48 Chevrolets, both owned by Hendrick Motorsports, had modifications to the front fenders that were deemed illegal during morning inspection.

The Hendrick crews were allowed to repair them and they can race in Sunday's Toyota/Save Mart 350, although starting from the rear of the 43-car field. Gordon, the four-time series champion, is the defending race winner.

"The cars have been repaired and I'm under the impression they will not receive an inspection sticker until tomorrow morning, which will allow the cars onto the racetrack," said Chad Knaus, Johnson's crew chief. "The guys on both teams have done a good job getting the cars repaired. They are race-ready now."

They both come from the deepest organization in the garage-area, and have master-strategists sitting atop their pit-boxes:
I doubt either will win from that far-back, but they'll have to be reckoned-with before the day is done. 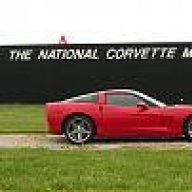 I personally hope that both are the first two cars out of the race finishing
42nd and 43rd.
The shortest distance between two points is under construction. ~ Noelie Altito.
G

Victory Red C6 said:
I personally hope that both are the first two cars out of the race finishing
42nd and 43rd.
Click to expand...

GONE 7 FEBRUARY 2012, BUT NOT FORGOTTEN​
You must log in or register to reply here.