With the carb date going in year/month/date it would be a June 2, 1966 carb and your car, as close as I can tell from only the first 3 digits of the sequence number, is a mid to 3rd week of June 1966 car. I'd say that the carb date is perfect.

...I thought it said Carbon Dating

We're not quite that old yet. :L 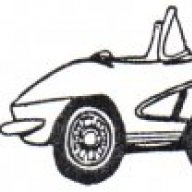 The 662 dated 3247 you ask about which I think was at auction on eBay decodes year, month, week. Therefore this carb was built in the second week of June 1966.

Your car being in the 24,000 serial range was most likely built sometime between Monday the 13th of June and Friday the 24th.

It has been my observation that most parts on unmolested cars are dated very proximate to the build of the assembly they may be part of or the build of the car. A. O. Smith built cars are one exception in some areas, sometimes. Holley carburetors are another.

Carbs were bolted to the engines on the St Louis assembly line not on the engine assembly line at Flint or Tonawanda. Generally Holleys pre date the assembly of the car by about two months. No doubt there are exceptions. This two month gap is not commonly found with most other parts.

Judging aside, if I was enjoying perusing your car and spotted the “tight” dates between carb build and car build, my eyebrow would likely raise of it’s own accord.

Not all of us see the same cars, but after many years of NCRS Judging, I don't find the gap between these dates (2 weeks or so) unusual. I've seen many Holleys, Bowtie cars included, that were within a month of car production date. For NCRS judging, these dates would not be an issue; I can't speak for other judging organizations, however.
John
'67 Convertible
You must log in or register to reply here.