DETROIT (Jan. 19, 2018) – It’s time for Corvette Racing’s return to the biggest stage in North American sports car racing as it kicks off its 20th season of competition. The Rolex 24 At Daytona marks the first event of the IMSA WeatherTech SportsCar Championship and is a race that Corvette Racing will try to win for the third time in four years.

In a new season, Corvette Racing will attempt to add another chapter to its history-making record book. No modern sports car program can boast the longevity of Corvette Racing – the same team with the manufacturer (Chevrolet) and model of car (Corvette). It is a partnership that has resulted in 106 race victories around the world, 12 Manufacturer and Team championships in IMSA, and 11 Driver titles.

The two most recent came in 2016 and 2017 when Corvette Racing swept the IMSA GT Le Mans (GTLM) championships. The drive for a three-peat begins with the same collection of driver pairings for the Rolex 24 as the past two years. Defending GTLM champs Antonio Garcia and Jan Magnussen team up again with Mike Rockenfeller in the No. 3 Mobil 1/SiriusXM Chevrolet Corvette C7.R. In the No. 4 Corvette, full-season teammates Oliver Gavin and Tommy Milner will drive with Marcel Fässler in hopes of replicating their 2016 Daytona class victory and Driver championships for Gavin and Milner. The Corvette Racing program made its competition debut at Daytona in 1999 with a two-car effort. In 2001, one of the team’s Corvette C5-Rs won the race overall. The team returned to the Rolex 24 in 2014 and scored back-to-back victories in 2015 and 2016. This will mark Corvette Racing’s eighth Rolex 24. In the previous seven attempts, the team has totaled 8,730 racing laps and nearly 30,000 racing miles – more than the circumference of the Earth at the equator.

Of course, the team has racked up more miles at Daytona than just in the Rolex 24 itself. It completed more than 1,400 trouble-free miles earlier this month during the three-day Roar Before the 24. Gavin set the second-fastest GTLM lap of the weekend to give Corvette Racing a favorable pitlane and garage assignment. Since the 2014 Rolex 24 – the first race under the ALMS/GRAND-AM merger – no manufacturer or team has won more often in the WeatherTech Championship than Chevrolet and Corvette Racing. Team Chevy has 35 victories with 15 coming in GTLM with Corvette Racing. The Rolex 24 served as the first event for the Corvette Racing program in 1999, and one of the team’s Corvette C5-Rs finished third in class. Two years later, Corvette Racing won the race overall. Fast forward to the current era, and the program added class victories in both 2015 and 2016. The latter was the thrilling 1-2 finish that saw the No. 4 Corvette beat its sister entry by just 0.034 seconds. That is just one of more than 40 victories for Chevrolet across all motorsports events at Daytona, making it the most successful manufacturer at the World Center of Racing.

The 56th Rolex 24 At Daytona is the start of the 2018 IMSA WeatherTech SportsCar Championship season and begins at 2:40 p.m. ET on Saturday, Jan. 27. It will air on live on FOX from 2-5 p.m. ET on Saturday with additional coverage across FOX Sports 1, FOX Sports 2, FOX Sports Go and IMSA.com. Live audio coverage of practice, qualifying and the race from IMSA Radio is available on IMSA.com.

ANTONIO GARCIA, NO. 3 MOBIL 1/SiriusXM CHEVROLET CORVETTE C7.R: “There are challenges every year. This year, the traffic will be different with a lot more prototypes than we have seen in the past. Staying out of trouble for the first 20 or 22 hours is even more important than it usually is. If we can manage to do that, stay in contact with the leaders and have good pace, we will have a really good shot at a win. Traffic will get crazy, especially with the number of rookies at this race – many who are experienced in other races but they are still rookies here. Let’s repeat what we have done the last three years here: no mistakes and no contact. If that’s enough, we would gladly take the win. If not, we will know that we have done the best we can.”

JAN MAGNUSSEN, NO. 3 MOBIL 1/SiriusXM CHEVROLET CORVETTE C7.R: “The challenge this year is the amount of drivers. There are a lot from series like Formula One and IndyCar; you name it and they all are here. But not all of them have endurance racing experience. It takes a lot of respect for each other out there to make it through without getting involved in incidents that end up costing you a trip back to the garage or even worse. It will be a tough year in that regard. Having now done three days of practice with this field, there is a feel of people not being as patient as they need to be. That can prove costly in the race.”
MIKE ROCKENFELLER, NO. 3 MOBIL 1/SiriusXM CHEVROLET CORVETTE C7.R: “It always has been very difficult to be successful in this race. It gets more and more difficult because the competition is getting better and better. There are manufacturers here with new cars, and we all are aiming for the best. This is a big field with a number of new teams and new cars. And it’s all great. If you look at the field and the level of drivers in this race, it’s amazing. It always has been but this year feels more special. On our side, our Corvette is well-known in terms of reliability. We are trying to maximize every part of it and be on the limit in every area. We have to because last year we didn’t win the race when we didn’t have enough speed on the straights at the end. We are hoping for the best and trying hard. But it will be a difficult race like it always is at Daytona.”

OLIVER GAVIN, NO. 4 MOBIL 1/SiriusXM CHEVROLET CORVETTE C7.R: “When you look at the grid, there are a number of teams and drivers who are new to this. Some are a very experienced rookies, but there are others who aren’t so much. Having some of those teams and drivers who don’t have experience in multi-class racing is a big deal. The grid is always full and traffic is always a big thing here. Yes, the banking is wide and there is usually room to maneuver. But that doesn’t mean there won’t be any contact. There will always be incidents here. Yes you want to stay in touch with the leaders in your class, but you have to keep your car clean. With the level of talent in the Prototype category but the lack of experience of some of the really fast guys, it’s going to be pretty intense. Those first 12 hours will be wild… even until the sun comes up Sunday morning. You’ll have to have eyes everywhere.”

TOMMY MILNER, NO. 4 MOBIL 1/SiriusXM CHEVROLET CORVETTE C7.R: “The number of new teams and new cars to this race, and drivers who are new to endurance racing and being out there are night… all of these things are going to be a huge part in being successful at Daytona this year. We at Corvette Racing have been in this position many times before at Daytona and longer events. More than ever, we are going to have a super-competitive fight in GTLM. That will take the majority of our focus. But we’ll be crossing our fingers not to get caught up in someone else’s accident. Being aware of all the new content and taking some extra caution around them at times could be beneficial. At the same time, you don’t to want to do anything that gets you out of position with the leaders so there is going to be a very important balancing act in this year’s race.”

MARCEL FÄSSLER, NO. 4 MOBIL 1/SiriusXM CHEVROLET CORVETTE C7.R: “In the end, the race itself is always the biggest challenge. Definitely having a number of unexperienced drivers in the other classes is something you have to pay attention to. For example, on restarts we know we have a bigger advantage with our Michelin tires in that they heat up much easier and faster than the prototypes. That can easily lead into mistakes, so that is an example of needing to concentrate fully during each of the 24 hours. Most importantly is having a car that is in one piece for the last two or three hours when the race is decided. This is always the key point. It’s easier to say than to do! But it’s how we have and continue to approach this race.”

DOUG FEHAN, CORVETTE RACING PROGRAM MANAGER: “We had a very smooth and largely trouble-free run at the Roar earlier this month. Now we will try to put it all into practice once again for the Rolex 24 At Daytona. It’s hard to put into words how far Corvette Racing has come since our first race here in 1999. The at-track team makeup is different, the cars are different and the stature of the event has grown tremendously. What hasn’t changed is our desire and expectation to succeed in this race. It takes a lot of skill, strategy and good fortune. By and large, no one has done that better or longer than Corvette Racing. We plan to use that to our advantage in hopes of a fourth Daytona victory.” 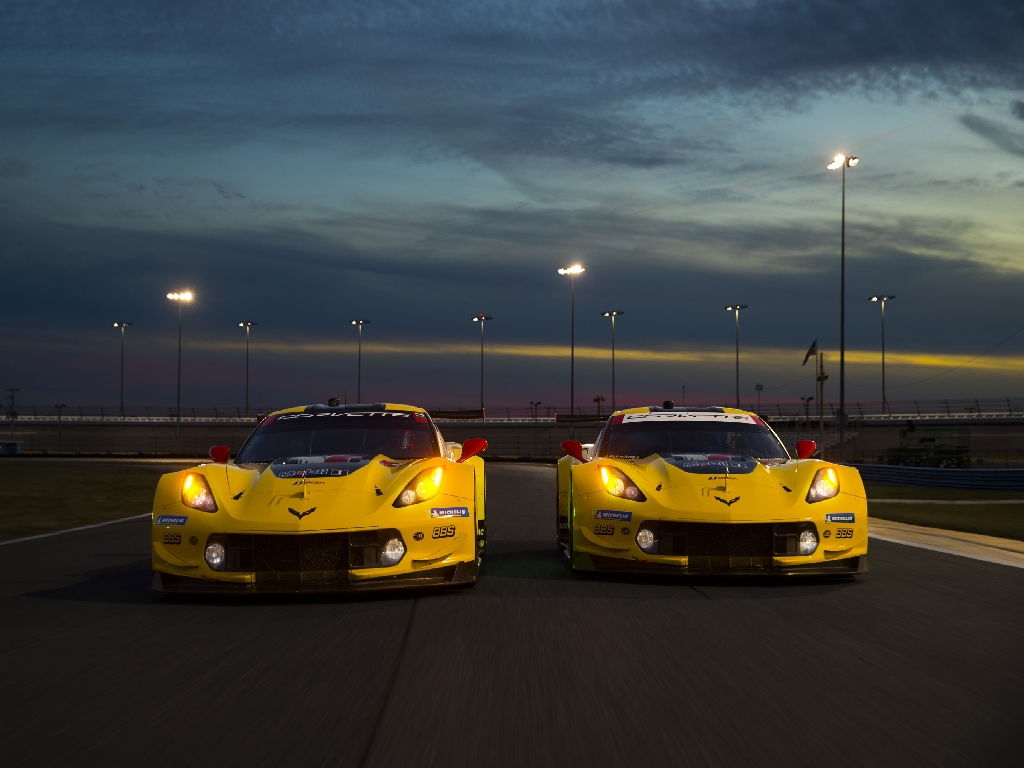