Garcia took the GT Le Mans (GTLM) checkered flag by 1.977 seconds in the No.
3 Mobil 1/SiriusXM Chevrolet Corvette C8.R. He drove nearly two hours to the
finish after Taylor drove a challenging single stint on a damp but drying
track at the start.


“Congratulations to Antonio Garcia and Jordan Taylor on winning today’s IMSA
race at Daytona,” said Jim Campbell, Chevrolet U.S. Vice President,
Performance and Motorsports. "Their win is twice as special for Chevrolet,
as Corvette Racing has now achieved 100 victories in IMSA competition. It
also is the first for the new mid-engine Corvette C8.R in just its second
race. This milestone win belongs to everyone who has been part of the
Corvette program over the years, our Corvette owners and our fans.”


The race, as it usually is in GTLM, featured multiple tire strategies. Both
Corvettes opted to begin the race on slick Michelin tires despite the wet
surface. Gavin, after leading a Corvette 1-2 in qualifying earlier in the
day, began first but Taylor was one of quickest drivers in the class early
on and managed to go one lap longer on fuel than most of his GTLM
competitors during his opening stint.


Meanwhile, Gavin clawed back from a tough start to regain the lead at the
end of his first run before handing off to Milner for the final two stints
in the No. 4 Corvette. He led at the time of his final stop with 55 minutes
left but had to save fuel in order to prevent an extra pit stop to finish
the race.


As Taylor did in his stint, Garcia went a lap longer than most of his
competitors in his first run and emerged directly behind Earl Bamber’s
Porsche with 51 minutes go as the two stopped on the same lap. Patience paid
off for Garcia, who made the winning pass with 31 minutes left and set
fastest GTLM lap of the race in the process.


Corvette Racing’s next event is the Cadillac Grand Prix of Sebring on
Saturday, July 18 from Sebring International Raceway in Sebring, Fla.

ANTONIO GARCIA, NO. 3 MOBIL 1/SiriusXM CHEVROLET CORVETTE C8.R – GTLM RACE
WINNER: "I think we deserved this moment. We came up just short so many
times even though we won championships. All I could think about when I went
across the line was remembering about Kyle (Millay, race engineer,
(ex-teammate) Jan Magnussen, Dan Binks and us coming so close. It's the
first win for the Corvette C8.R, 100th in IMSA for Corvette Racing and the
first victory with Jordan. This is huge.
"This means a lot. Our last win was at VIR in 2017. From then until now, you
look at all the times we finished second and how many times we could have
won a race. So I'm very happy for today. There was great execution in the
race and we didn't make a single mistake. It really showed that we learned a
lot from the Rolex 24. This was a perfect day for us with the first pole and
first win for the Corvette C8.R. Hopefully this is the first of many."


HOW CLOSE WERE YOU ON FUEL AT THE END?
"That was the big thing. Jordan did a perfect job on that. He saved one lap
in his stint, and I saved one on my first stint. We were going for a green
race and made it to the end. We didn't know if the Porsche would make it,
and when we came out after the last stop we knew it was going to be between
us. I'm very happy for Corvette Racing and Team Chevy. We came so close with
the C7.R, now it's time to win with the C8.R."


JORDAN TAYLOR, NO. 3 MOBIL 1/SiriusXM CHEVROLET CORVETTE C8.R – GTLM RACE
WINNER: "It is amazing. I think the off time gave the Corvette Racing guys
some decent time to make some headway with our new C8.R. Our fuel mileage,
engine and drivability at the beginning of the race was much better than the
first race. Pit stops were improved as the guys were training through the
quarantine once they could get back in the shop. I'm very proud to be here
with Antonio for the first win for the C8.R and the 100th win for the team.
It is a very special day."
TALK ABOUT THE SIGNIFICANCE OF THIS WIN TODAY: "It is definitely a big day
overall. We came to the Rolex 24 with a new car in the Corvette C8.R. The
team did a lot of development, and we came out very strong there to come out
with a fourth-place finish and no issues. Once we had the big break, it gave
the team to go through data and understand what worked and what didn't. For
us, we rolled off the truck this week very strong, which was good with the
limited track time. The guys did a great job with pit stop execution and
reading the strategy well from the beginning. It was a perfect day for the
Corvette C8.R. It's extra special to win today at Daytona, to get the 100th
IMSA win for Corvette and my first win as a full-season teammate with
Antonio."


OLIVER GAVIN, NO. 4 MOBIL 1/SiriusXM CHEVROLET CORVETTE C8.R – FIFTH IN
GTLM: "It was a tough first few laps for me. I was on slick tires and maybe
on the wrong side of the track; it seemed like it was extra wet where I was.
I would redo some things and made some bad choices on those first couple of
laps. Plus I got hit twice by one of the BMWs but that was a racing
incident. That pushed me back to the back of our field. The Corvette had
good pace and I was able to catch back up again. Unfortunately we got sucked
into a battle with the lead BMW and that sort of determined our strategy.
Things didn't just play out for us and we were left in the last stint with
Tommy really having to save a lot of fuel. Yes, it was a frustrating day for
us in terms of results but very encouraging on the No. 4 Corvette. We showed
pace, were able to lead and were on pole. There are lots of positives to
take away from today. But it's frustrating that we can't back up all that
potential with good points for the championship. Hats off to the team and
the work they did. The win today for Antonio and Jordan in the 3 Corvette is
fantastic... to get 100 wins in IMSA is amazing for this program and with
this brand new Corvette C8.R. It shows the strength of Corvette Racing that
we can come back to the track and hit things hard and fast and being able to
run with the best. For a team, this is a fantastic result and I'm pleased
for everyone involved."


TOMMY MILNER, NO. 4 MOBIL 1/SiriusXM CHEVROLET CORVETTE C8.R – FIFTH IN
GTLM: "Ultimately our race, if we play it in reverse, we should have picked
a different strategy. If you ask BMW and Porsche they would also do
something different strategy-wise. So the No. 3 and the No. 912 had the
winning strategy. The rest of us were fighting for the scraps. That part is
frustrating of course - to miss it on the strategy. But I would say for all
of us it was good to be back in the race car again and work any rust off in
that sense. Certainly from a driver perspective, I'm very proud of how fast
these Corvette C8.Rs were. We had a car good enough to win the race today.
Fortunately one of our two got the win. But we are pretty disappointed
coming out of here based on our pace in practice. Based on what we were
looking at, we thought we had a good shot to race with the Porsches for
sure. At times the BMWs were fast too, but we thought wee had a pretty good
chance today. Of course I'm super happy for the team and all the crew guys
who even though we've been on a long break, those guys have put in a lot of
work in these past couple of weeks to get these Corvettes race-ready, and
ready to win races. Today is good validation to showcase all the work they
have done." 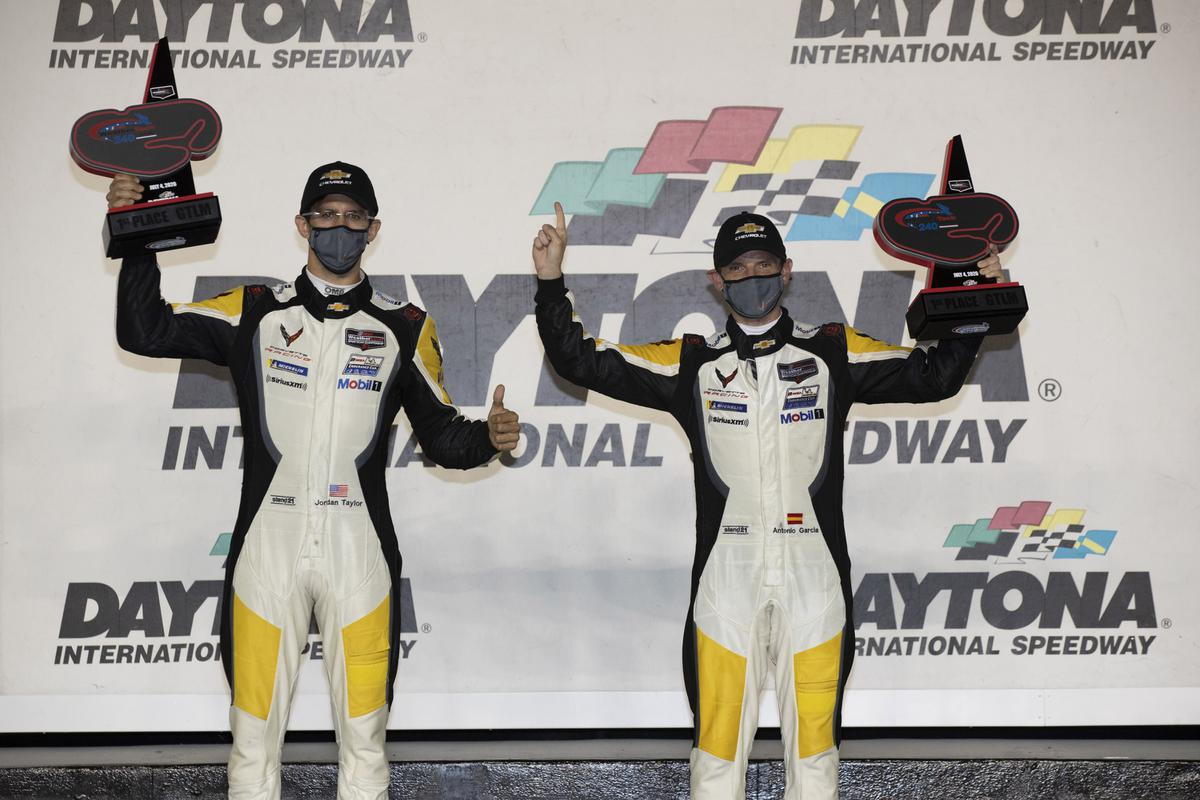