DETROIT (June 10, 2019) – For the 20th straight year, Corvette Racing is set
to take on the 24 Hours of Le Mans. Following a successful run on the Le
Mans Test Day last weekend, endurance racing’s premier GT sports car team
has put finishing touches on its preparations for a ninth class victory.


Corvette Racing has been a constant at Le Mans the past two decades. It has
generated a global following with its successes at Le Mans, fan-friendly
approach and roaring V8-powered Corvette race cars. This year’s Le Mans is
the sixth for the Chevrolet Corvette C7.R, which has recorded a victory and
two other podium finishes in that time.


There’s still plenty of life in the Corvette C7.R, has evidenced by its
showing on the June 2 Test Day. Mike Rockenfeller was the fastest GTE Pro
driver with the No. 63 Mobil 1/SiriusXM Chevrolet Corvette C7.R that he
shares with full-season teammates Antonio Garcia and Jan Magnussen. In the
No. 64 Mobil 1/SiriusXM Corvette, Tommy Milner set the Test Day’s
third-quickest time in class; he is driving with Marcel Fässler and
full-season teammate Oliver Gavin.


As has been standard practice, Corvette Racing did not concern itself with
outright speed and pace on the Test Day. Instead, the team worked toward
race setup by concentrating on items like tire compounds and pressure,
suspension components and other areas that will insure the two Corvettes
will be in the best possible position come Saturday and Sunday.


It’s a formula that has worked for 20 years. Since debuting at Le Mans in
2000, Corvette Racing has scored eight class victories and accumulated
nearly 100,000 racing miles at the 24 Hours. Very rarely has the Corvette
been quickest over a single lap, a testament to the team’s commitment to the
long game at Le Mans.


Corvette Racing also will try to carry over its momentum from the IMSA
WeatherTech SportsCar Championship’s early-season run to Le Mans. Garcia and
Magnussen, winners of the last two GT Le Mans (GTLM) titles, have reeled off
three straight podium finishes and sit second in points after four races… a
similar to start to their 2018 campaign.


And the GTLM champions before Garcia and Magnussen went back-to-back in
2017-18? That would be Milner and Gavin, who won the Rolex 24 At Daytona in
2016 with Fässler. The Gavin/Milner duo have showed front-running pace at
every IMSA race this season but have been snake bit with bad luck, although
they did finish third in class at Long Beach.

Le Mans is the final race in the FIA World Endurance Championship Super
Season. There is a total of 17 entries from five manufacturers in the GTE
Pro category.


The achievements by the collection of six Corvette Racing drivers can’t be
matched by any other entrant at Le Mans. The group has combined for 19
victories – an exemplary record at Le Mans:


The 24 Hours of Le Mans will air live on the MotorTrend Network with
coverage of practice, qualifying and the race on Radio Le Mans.

ANTONIO GARCIA, NO. 63 MOBIL 1/SiriusXM CHEVROLET CORVETTE C7.R: “We’ve not
had a win in our Corvette since 2017. It’s been too long. We want to win for
sure in IMSA but I’d be more than OK if it happens at Le Mans! It’s also
been so long since I’ve won there. We have been close a couple times in the
last three or four years. I really want to win it again. Preparation is
always a good thing, and doing both the WEC and IMSA races at Sebring was a
good step. There were some revelations of how we can execute at Le Mans
instead of having to remember everything from a year ago. Everyone is
well-prepared. Let’s see if that’s enough. Le Mans is unique. Once you win
there, you want to do it again. The feeling of going across the line or when
you are on the podium is so intense… it’s one of the best feelings you can
ever have. All you want to do is get back up there.”


JAN MAGNUSSEN, NO. 63 MOBIL 1/SiriusXM CHEVROLET CORVETTE C7.R: “Everyone at
Corvette Racing has a lot of experience at Le Mans. But it’s not routine
going there. Yes there are things we do year in and year out in terms of how
we prepare ourselves and how you plan out the race. The race, the car and
the track are always at least a little bit from year to year. The last
couple of years we have been very competitive, and I believe that will be
the case again this year. We will concentrate on our own plan and trying to
execute that the best we can. As we’ve always done at Corvette Racing, we
try to stick to our own plan… not worry so much about what everyone else is
doing but have faith that our plan is good enough to win. And usually when
our plan comes together, we end up coming out on top.”


MIKE ROCKENFELLER, NO. 63 MOBIL 1/SiriusXM CHEVROLET CORVETTE C7.R: “Le Mans
is so historical and such an old race with so many big racing moments and
heroes. That it isn’t a permanent track is unique. Those are just a few
things that make Le Mans special. It is hard to describe. When I first
started racing in a professional level, I went to Le Mans when I was 18 to
watch the race. I walked the track at night, saw the speed of the cars,
glowing brake discs, sparks flying off the cars as the drivers pushed their
cars to the limit all the time. That was an impression that I would never
forget. From that point on, Le Mans meant so much to me. It still does as I’m
back again with Corvette. We all are 100 percent focused on winning. That’s
the greatest feeling… to be on the podium with all those people below. I’ve
never had that feeling anywhere else in the world.”


OLIVER GAVIN, NO. 64 MOBIL 1/SiriusXM CHEVROLET CORVETTE C7.R: “Le Mans is a
unique beast; sometimes Le Mans it’s a beast that’s kind and is on your
side, and other times it is absolutely horrible and it’s completely against
you. You feel like you’re fighting against it the entire time you’re there.
But that’s a reason why it’s such an amazing race. You try to get some
influence over the race and shape it. If you can’t do that, then you’re a
little bit in the passenger’s seat and waiting for someone to make a
mistake. Every year you go there, it’s still quite unknown how you’re going
to go because things are so tight in our class. We had a good Test Day and
learned a lot. You can take all of those positives together and come up with
what we know, what we’ve got and what we all know collectively as drivers
and crew how things are going to go. Ultimately, you don’t find out if you’re
really in the race with a chance until Saturday afternoon or Saturday
evening.”


TOMMY MILNER, NO. 64 MOBIL 1/SiriusXM CHEVROLET CORVETTE C7.R: “For the
whole of the program, Le Mans is No. 1 on our lists of goals to achieve each
year. From Corvette Racing’s side, this is a little bit of a one-off race
and unique for us. There is added emphasis on Le Mans. That comes from the
race itself – what Le Mans means, its history and its prestige. We get close
to that in the U.S. with Sebring, Daytona and Petit Le Mans. Those are
massive events that we all want to win. Not to take anything away from those
events and successes, but Le Mans has something a little more. That name has
a familiarity to it even to people who don’t follow racing. That all
translates to everyone’s best effort. Everything is just done that one
little notch higher or more intense. That comes with the territory of being
at this race. Being at Le Mans each year gives you goosebumps every time.”


MARCEL FÄSSLER, NO. 64 MOBIL 1/SiriusXM CHEVROLET CORVETTE C7.R:
“Preparation for Le Mans has been good. We tested at Road America and course
on the Le Mans Test Day. We also went to Charlotte for some work in the
Chevrolet simulator. This was a good chance to adapt ourselves again to the
Le Mans track. It was important to jump right into that to get up to speed
and stay on pace. Corvette Racing has so much experience in preparing a car
that needs to be up to battling for a victory at Le Mans because the
manufacturer competition will be very tough. I’m really looking forward to
this. I have three wins at Le Mans but never in GTE Pro, and this is
something I’d like to achieve with Oliver, Tommy and the Corvette Racing
team.” 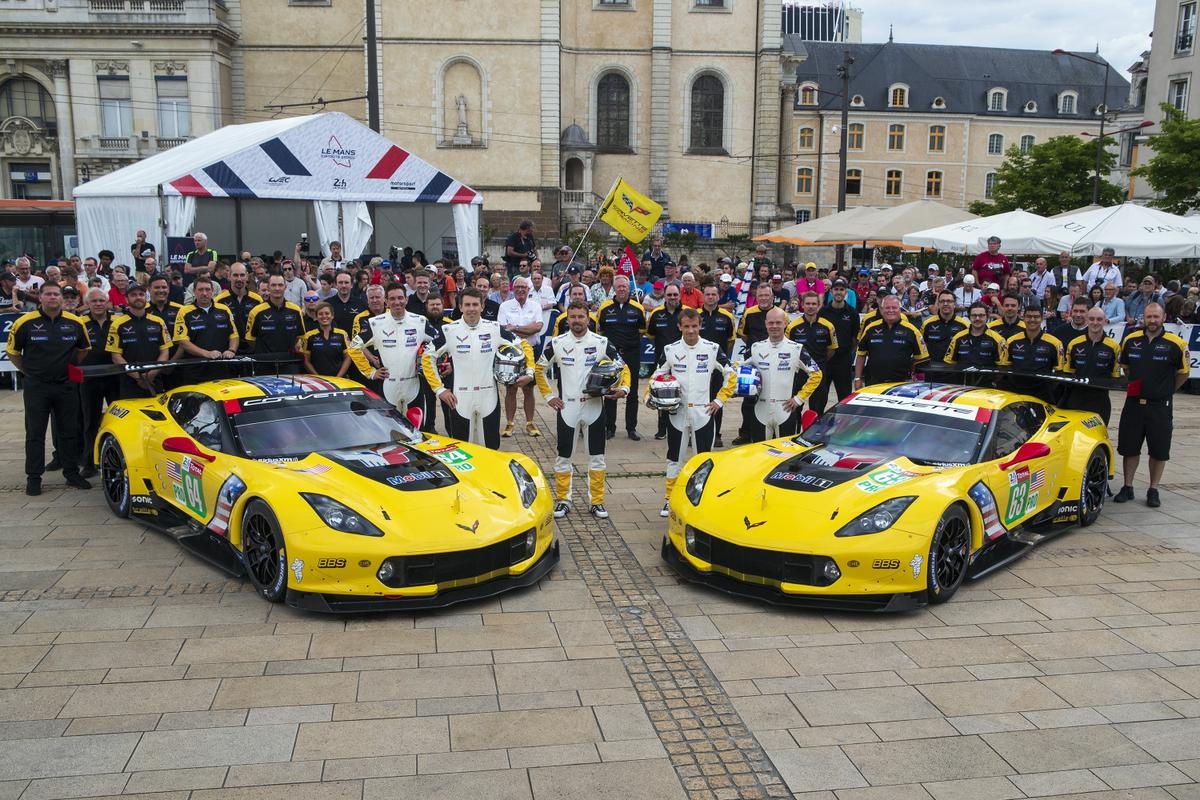