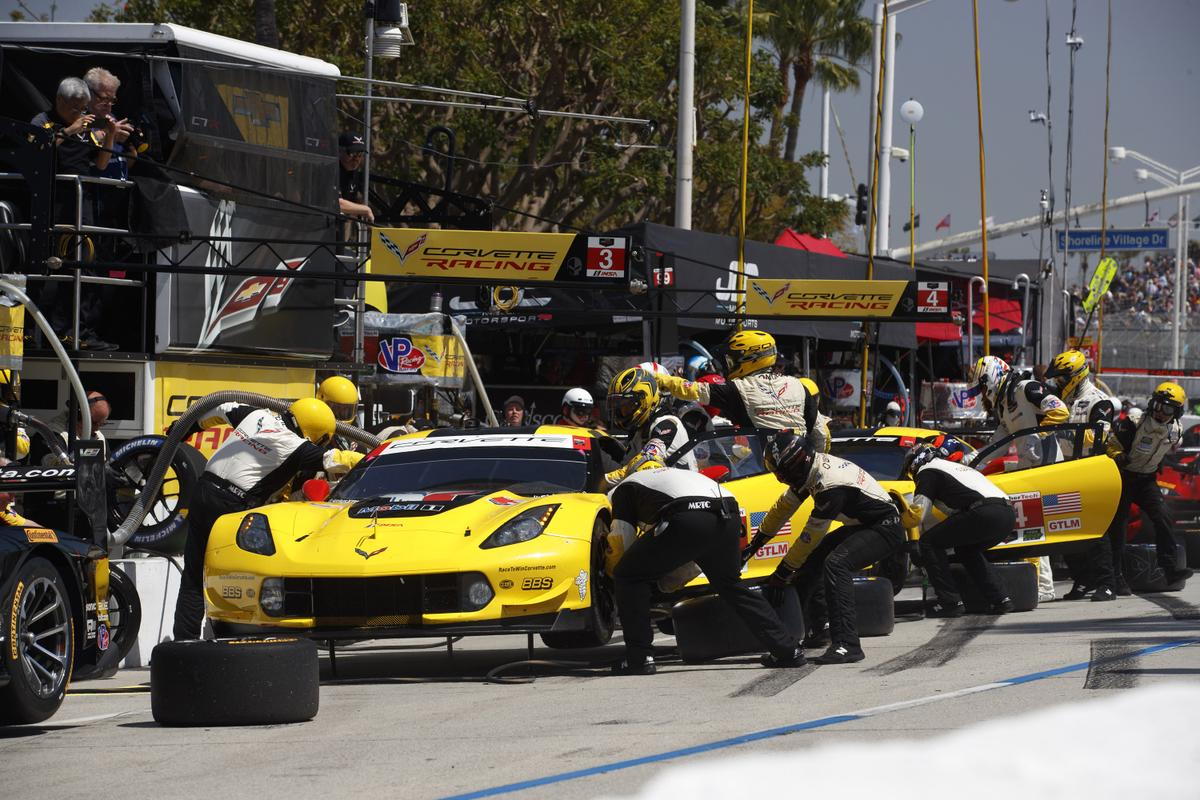 DETROIT(April 8, 2019) –During the past 20-plus years, Corvette Racing has made its mark in long-distance endurance racing with multiple victories in the 24 Hours of Le Mans, Rolex 24 At Daytona and the Mobil 1 Twelve Hours of Sebring.


But the program aims this weekend to add to its sparkling success rate at the shortest race on its yearly calendar with a return to the Bubba Burger Sports Car Grand Prix at Long Beach. The pair of bright yellow Chevrolet Corvette C7.Rs will look for a third straight victory on the streets of Long Beach and eighth at the event since 2007.


More significantly, a triumph in Saturday’s 100-minute race would be Corvette Racing’s 100th in IMSA competition Coincidentally, No. 99 in North America came a year ago at Long Beach. It also gave Chevrolet its ninth Long Beach IMSA victory – the most among series manufacturers at the event.


Oliver Gavin and Tommy Milner enter Long Beach as winners the last two years at the event in their No. 4 Mobil 1/SiriusXM Chevrolet Corvette C7.R. It was Gavin’s 50th victory with Corvette Racing, and he leads all IMSA drivers with five victories at the event. Milner, who drove the closing stint the last two years, is a three-time winner at Long Beach – all with Gavin.


Two years ago, the Gavin/Milner duo were the benefactors when the No. 3 Mobil 1/SiriusXM Corvette of Antonio Garcia and Jan Magnussen were blocked at the final corner of the final lap by a trio of stopped cars. Milner had no choice but to slip through an opening to secure another Chevrolet victory. Last season Milner took the lead with about 20 minutes to go after a mechanical problem dropped Garcia from the lead just before a restart.


The Bubba Burger Sports Car Grand Prix from Long Beach begins at 2:05 p.m. PT on Saturday, April 13. It will air on live on NBC Sports Network and the NBC Sports app starting at 5 p.m. Live audio coverage of practices, qualifying and the race from IMSA Radio is available on IMSA.com.

ANTONIO GARCIA, NO. 3 CHEVROLET CORVETTE C7.R: “Long Beach is a fine circuit… except for the last corner! That’s only half-serious as I’ve never had such bad luck at one spot before. We probably should have won the last two years. In 2017 the track became blocked at the final corner and I went from first to fourth. Last year we had an electrical problem that took us out of the lead after a caution. It’s unfortunate but that is racing sometimes. We can take confidence that Corvette Racing has shown strong at Long Beach for many years, especially with the C7.R. Maybe this year will be the one Jan and I can have luck go our way.”


JAN MAGNUSSEN, NO. 3 MOBIL 1/SiriusXM CHEVROLET CORVETTE C7.R: “Long Beach is a fantastic event and a fun track. It’s a great track to race on. The race being as short as it is means there is a lot of action in not much time. The last two years, we’ve been where we needed to be but just little things got in the way. The No. 4 guys have won the last two years, so hopefully we can have a little bit of luck go our way at Long Beach to get some points back from a not-so-great Daytona and build on our result at Sebring.”


OLIVER GAVIN, NO. 4 MOBIL 1/SiriusXM CHEVROLET CORVETTE C7.R: “Our success at Long Beach comes down to many things. Fundamentally, Tommy and I have been in the position to win each of the last four years. Yes, things have had to go our way in some cases. Three years ago we were leading with two laps to go and got taken out at the last corner. But the last two years we’ve taken our chances and take them well. That’s what it’s all about driving around a street circuit – when to risk it, when not to, take advantage of the mistakes of others and execution. Last year we had a good Corvette. We were strong and Tommy had a great stint at the end. Sure, we got fortunate when two other cars had contact but that’s one of the reasons we’ve won so many times at Long Beach. We’ve managed to execute passes cleanly and we’ve been smart. All it takes is a little bit of contact or a brush with the wall and your day is done. There are no second chances at Long Beach.”


TOMMY MILNER, NO. 4 MOBIL 1/SiriusXM CHEVROLET CORVETTE C7.R: “For me, my success at Long Beach has been a bit of a surprise in some ways. I’ve never really thought street races were my strong suit. The racing is always fun there, but I always felt more comfortable at other tracks. But I’ve had some of the best outcomes at Long Beach – my first Corvette IMSA win in 2012 with Oliver, and then we’ve been super strong there the last four years with the Corvette C7.R. There definitely is something about Long Beach that suits our driving styles. We just have good races; we put ourselves in good position, we have good pit stops and Olly does a great job in qualifying. We always seem to end up in the right places at the right time. Certainly we’ve some luck go our way there, but we’ve also been on the other side of it. It would be great to get another win there, for sure – No. 100 in IMSA for Corvette Racing.”