Tommy Milner and Nick Tandy drove the No. 64 Chevrolet Corvette C8.R to a thrilling win in the Six Hours of Monza. It was the program’s first victory of the season in the FIA World Endurance Championship and the maiden win in the series for the mid-engine Corvette.


Tandy crossed the finish line first in GTE Pro after the leading Ferrari had to stop for a late-race splash of fuel with two laps to go. The No. 64 Mobil 1/SiriusXM Corvette was close on fuel as well, but engineering strategy and Tandy’s fuel-saving made all the difference in the end.


The result was a welcomed one following a crushing retirement at the 24 Hours of Le Mans a month ago.


"This was a long time coming, but this team performed and executed so well today,” said Laura Klauser, GM Sports Car Racing Program Manager. “Tommy and Nick drove their hearts out in this Corvette. Even if we had a couple of setbacks, we found our way around them. We did what Corvette Racing always does: we never gave up!"


The victory was Corvette Racing’s first in the WEC since the 2015 24 Hours of Le Mans and its first as a full-time entrant in the series. Milner and Tandy came close with a runner-up finish to open the year at the 1,000 Miles of Sebring.


Tandy started from second but ceded the position in the tight first corner and carried on the fight from there. Differing early strategies moved the Corvette back to second ahead of its first call to the pits. A long stop dropped the Corvette down to fourth in class, but Tandy continued to drive steady until the third full-course caution of the race just shy of the two-hour mark.


He stopped and handed off to Milner, who rejoined fourth but made up track position with a safety car period near the two-and-a-half-hour mark. The No. 64 continued to match the pace of the leaders, and Milner – making his first career start at Monza – moved the Corvette back into podium position just prior to another round of pit stops with two hours to go.


Tandy went the rest of the way and moved up to second after a five-second penalty to the leading No. 51 Ferrari with 90 minutes to go. A final full-course caution period with 70 minutes to go opened up the pit window for the final stop, and Corvette Racing engineering called him in with 67 minutes to go and a full tank of fuel.


Tandy got within four seconds of the No. 52 for the class lead inside 40 minutes to go before backing off to save fuel and get to the finish without another stop.


After seemingly settling for second, Tandy and the rest of Corvette Racing were astonished and ecstatic when both Ferraris peeled off into the pitlane. Minutes later, yellow-and-black clad team members were at the pitwall celebrating as Tandy crossed the line.


Corvette Racing’s next event in the FIA WEC is the Six Hours of Fuji on Sept. 9-11.


TOMMY MILNER, NO. 64 MOBIL 1/SiriusXM CHEVROLET CORVETTE C8.R – GTE PRO WINNER: "I can't believe it. The Ferraris seemed to have a lap better than us on fuel than what we could do. The team gave Nick a fuel number that seemed impossible to me, but he was just barely making it. At some point, I guess they thought they couldn't go and we were sitting here thinking they had it in the bag. Obviously that wasn't the case!

“You could see on the faces of the crew guys underneath the podium how unexpected this win was. We could see early on in the race that a podium was possible. But based on the pace of the Ferraris and them going a lap longer than us on at least one occasion while we were trying to save fuel… it looked like during the last run that second place was really going to be it. Nick was given a fuel number and told to push quite hard to close the gap if possible. There was a combination of things, I’m sure. Us putting pressure on them early on in that last stint made it so they couldn’t save a lot, so here we are P1!
“For me, it’s super special to be here at Monza for the first time. It’s a track that I’ve always wished I could race on. To be here for the first time and stand on the top step of that podium – which is quite historic – to see the fans and our crew guys just below us there was very cool.”


NICK TANDY, NO. 64 MOBIL 1/SiriusXM CHEVROLET CORVETTE C8.R – GTE PRO WINNER: "With two laps to go, I saw a red car coming in and didn't know which one. I asked if it was the 52 and the team said it was. Like Tommy said, we basically gave up with about 30 minutes to go because we had to hit a stupid number to make it. But we did!
“We had no idea really what cars could make it. I think there were four of the five cars that pitted under a safety car with basically three hours left, so it was going to be a stretch for all those cars to make it on two more stops. From then on it became a fuel mileage race. When the last full-course yellow came out, it made it worse for all those cars because everyone needed to pit for fuel because firstly we needed it. It also made the last stint another couple of laps longer. In the end, we were the car to make it.

“We fully expected the Ferrari to be able to go to the end. They had already done a stint under green to start the race and went a lap longer than what we could do even when we were saving earlier. We knew we had to be super-aggressive with the fuel numbers. After the full-course yellow, the guys gave me a fuel number… I did laugh a bit when they said it at the start but I knew that if we stopped then it was going to be game over. So we had to run at that pace. The good thing is that at the end, the track came to us and the tires were definitely working really nicely toward the end of the race. So the car had good pace and we could take a bit of margin down the straight and keep the speed in the corners to put the pressure on the Ferrari. I could see that they picked up the pace and that’s when I guess they said they couldn’t make it. We didn’t know that at the time, so when they came in with two laps to go, it was happy days! Corvette’s first time in Monza and Corvette’s and Tommy’s first win!
“I didn’t want to save anything. We were catching them quite quickly on the final stint and I thought things were looking really good. Then all of a sudden we had to start really making the fuel number they’d given me rather than trying to make it while still going quick. We didn’t really drop any pace but they suddenly seemed to start pulling away from us. I thought at the time and hoped that they had given up on their fuel savings. We just assumed they were safe and they could run the pace they wanted. As it turned out, they couldn’t. Everyone went from, ‘OK, good race and good podium’ to ‘We’re about to win the Monza Six Hours!’ So it was pretty cool!” 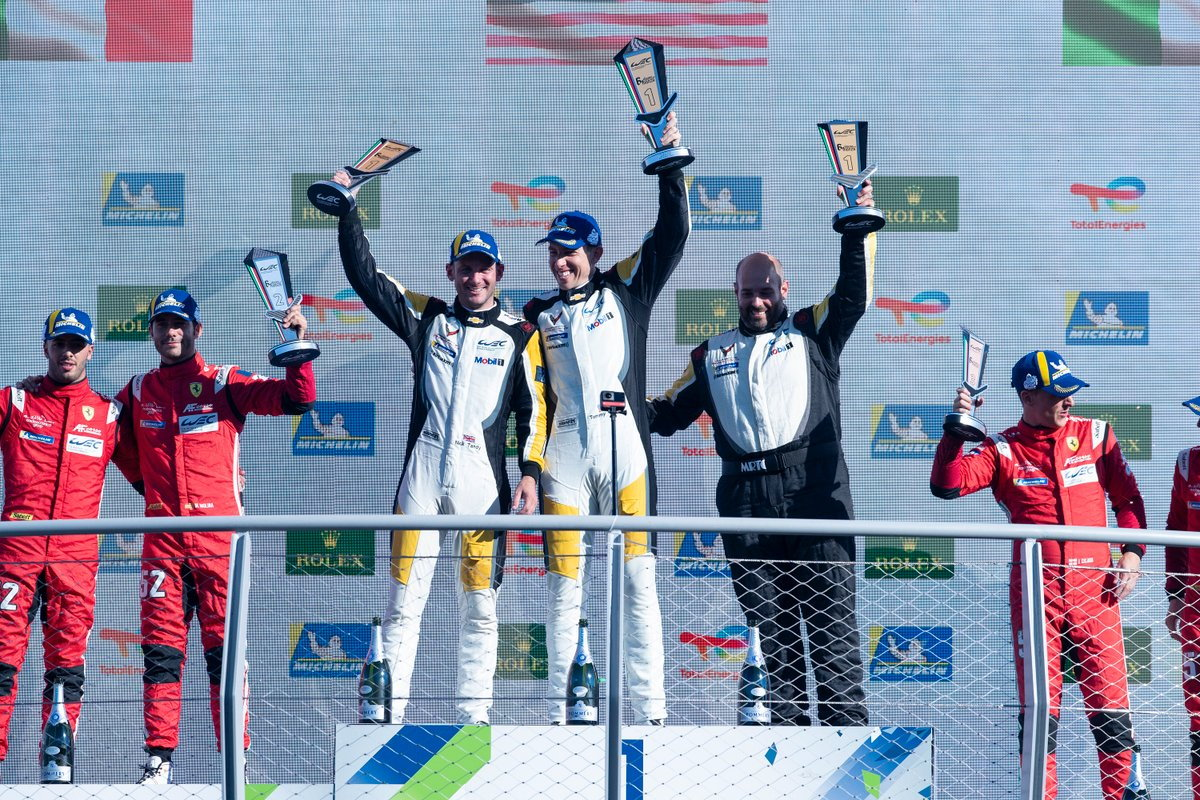