DETROIT (March 11, 2018) – Corvette Racing is used to facing sports car racing’s toughest tests. But this year’s trip to Sebring International Raceway may be its challenging yet.


The IMSA WeatherTech SportsCar Championship and the FIA World Endurance Championship each will race around the 3.74-mile, 17-turn Sebring circuit March 15-16 with Corvette Racing participating in both events. It’s another opportunity for the program to show why it’s one of the best in the sport’s history.


Mobil 1 Twelve Hours of Sebring presented by Advance Auto Parts
In its 20-plus years of competition, Corvette Racing has racked up more victories than any team in IMSA history. Those 99 have come on some of North America’s classic road courses with 11 at the famed Sebring International Raceway. That’s where Corvette Racing returns for the 21st time in search of a fourth victory in five years at the Mobil 1 Twelve Hours of Sebring.


The event may as well be a home race. In 20 years, the Corvette Racing program has racked up 11,613 laps for 43,107.40 racing miles. There also are thousands of testing laps and miles that have filled the engineering and crew notebooks since 1999. What’s more, the six Corvette Racing drivers have combined to win 19 times at the circuit.


This year’s race offers a chance for a redemption of sorts following the first race of 2019 at Daytona. Both Corvettes led the GTLM class in the opening half of the Rolex 24. After coming back from a pitlane collision by its sister car, the No. 3 Corvette of defending GTLM Driver Champions Antonio Garcia and Jan Magnussen along Mike Rockenfeller made up three laps and led near the halfway point before running out of fuel on track. It was the result of a loss of telemetry between the Corvette and the pit stand.


Oliver Gavin, Tommy Milner and Marcel Fässler were in contention at Daytona before a crash near the 16-hour mark after a high-speed hydroplane sent the No. 4 Corvette hard into the Turn 1 tires. It had been a remarkable run to the front for the trio, which started the race ninth in class.


FIA World Endurance Championship 1,000 Miles of Sebring
As if 12 hours around Sebring isn’t enough, Corvette Racing will be the only team to contest in both feature races of the Sebring weekend. Garcia, Magnussen and Rockenfeller will pilot the No. 63 Mobil 1/SiriusXM Chevrolet Corvette C7.R in Friday’s race for the FIA WEC, which goes either 1,000 miles or eight hours.


It will be the third event for Corvette Racing in the FIA WEC’s “Super Season”, which began with the 2018 24 Hours of Le Mans. Gavin and Milner also raced a Corvette C7.R in the Six Hours of Shanghai in November. That chassis will be the same one that Garcia, Magnussen and Rockenfeller will drive in the Sebring WEC round.


This will mark the second time Corvette Racing has competed in IMSA and FIA WEC rounds on the same weekend. The team entered a Corvette C7.R for Milner, Jordan Taylor and Ricky Taylor at Circuit of The Americas in 2014.


Chevrolet, Corvette on Display at Sebring
This year’s Mobil 1 Twelve Hours of Sebring will again feature a heavy dose of Chevrolet – the official vehicle of Sebring International Raceway. In addition to Corvette Racing’s three Corvette C7.Rs competing on the track, the field also will include a Chevrolet Corvette Z06 that will serve as the event pace car. The Corvette C7.R and production Corvette Z06 represent the closet link between race car and street car with the two sharing a common aluminum chassis, engine technology and aerodynamic strategies.


In the Sebring Midway, the Chevrolet Motorsports Display is a must-see for any fan. A number of vehicles will be on-site for visitors to view and learn about, including the Chevrolet Corvette ZR1 – a supercar that establishes a new standard at Chevrolet for power output, track performance and technology.


Also among the lineup of Chevrolets at the Display include:
• Production vehicles like the new Blazer RS, Traverse High Country, Silverado 1500 Trailboss, Colorado Crewcab Z71, Malibu RS, Equinox Premier and Traverse Premier Redline
• A Corvette C7.R show car
• Samples of Chevrolet engines, performance parts and accessories available to fans for purchase from their local Chevrolet dealer
• A variety of Chevrolet and racing related activities for adults and kids
• Corvette Racing t-shirts for fans who sign up with Chevrolet Motorsports


The Corvette Racing Display will be open at 9 a.m. on Thursday, and 8 a.m. on Friday and Saturday.


Fans at Sebring also can get behind the wheel of select Chevrolet vehicles at the Chevrolet Ride & Drive located at the Sebring skidpad near the drive-over bridge on the outside of the track. Vehicles available include Corvette, Camaro, Blazer, Silverado and Traverse.


The Ride & Drive opens at 9 a.m. on Friday and Saturday.


The 67thMobil 1 Twelve Hours of Sebring presented by Advance Auto Parts is the second race of the 2019 IMSA WeatherTech SportsCar Championship season and begins at 10:40 a.m. ET on Saturday, March 16. It will air on live on CNBC starting at 10:30 a.m. ET with additional coverage across NBC Sports Network and the NBC Sports app. Live audio coverage of practice, qualifying and the race from IMSA Radio is available on IMSA.com.


The FIA WEC’s 1,000 Miles of Sebring is set for 4 p.m. ET on Friday, March 15. It will air live on Velocity with live audio coverage of practice, qualifying and the race on RadioLeMans.com.

ANTONIO GARCIA, NO. 3 and NO. 64 MOBIL 1/SiriusXM CHEVROLET CORVETTE C7.R: “This Sebring for sure will be much different than any we have done in the past. It’s the first time I have driven two GT races on the same weekend. Doing two races of these lengths on this track will be very tough to say the least! We have done enough laps and years at Sebring to know how much this will test us and our Corvettes. The cars should be very close to the same in performance for the IMSA and WEC races. So one of the benefits is that we will be able to gather extra data during the week.”


JAN MAGNUSSEN, NO. 3 and NO. 64 MOBIL 1/SiriusXM CHEVROLET CORVETTE C7.R: “We come to Sebring every year to test ourselves and our Corvettes. This takes it to a new extreme! But we will be in racecars the whole time so it will good. Both of these races are important in their own way. Friday’s WEC race is good in that we get a chance to size up the competition we usually at Le Mans. It will be good race them on our turf this time. Of course everyone wants to win the 12 Hours. In a lot of ways it’s still the most physically demanding race we do. It’s important to everyone at Corvette Racing and you can see that with the number of victories over the years. We need a good showing in the 12 Hours to get ourselves in the championship again.”


MIKE ROCKENFELLER, NO. 3 and NO. 64 MOBIL 1/SiriusXM CHEVROLET CORVETTE C7.R: “I always wondered what it would be like to race for 24 hours at Sebring. This will be close! I have done a few long-distance endurance tests at Sebring where we would run for 25-30 hours. But this event will be much different with the separate practices, qualifying sessions and the race. The good thing is that our WEC program should help us with data for the 12 Hours. Overall, having success at Sebring will be the best way to rebound after Daytona.”


OLIVER GAVIN, NO. 4 MOBIL 1/SiriusXM CHEVROLET CORVETTE C7.R:“To say that Sebring is unique would be a massive understatement. Just like Le Mans, you can’t find a track like Sebring anywhere in the world. Add the atmosphere and you get an event that has a tradition like Le Mans, Monaco or any of racing’s great spots. Of course everyone at Corvette Racing enjoys coming to the 12 Hours. We have a long history at Sebring with a lot of wins. Adding another would make up for how we started the year at Daytona.”


TOMMY MILNER, NO. 4 MOBIL 1/SiriusXM CHEVROLET CORVETTE C7.R: “We’re all still pretty disappointed with how Daytona ended up for us. Those kinds of races are few and far between for Corvette Racing. The encouraging part is that both our Corvettes were strong in the early going. We just had too many mistakes. I know everyone on the team has reflected and reviewed everything that went on, and we’ll come back at Sebring with hopes of getting back on the right track.”


MARCEL FÄSSLER, NO. 4 MOBIL 1/SiriusXM CHEVROLET CORVETTE C7.R:“It’s always a challenge to have success at Sebring. In many ways you need more luck than other places because of the bumps and the way the track beats you up. That is what makes this race unique. You know that anything can happen. It will be a long weekend – longer for the guys on the No. 3 Corvette – but this is one of the most enjoyable races we do.”


2019 WeatherTech SportsCar Championship – GTLM Standings (After One of 11 Events)

Corvette Racing By the Numbers at Sebring
• 1: As in one team, one manufacturer and one model of car for 20 years: Corvette Racing and Chevrolet.
• 3: Wins in four years for Corvette Racing heading into the 2019 Sebring weekend. Antonio Garcia/Jan Magnussen/Ryan Briscoe won in 2015, Oliver Gavin/Tommy Milner/Marcel Fässler in 2016, and Garcia/Magnussen/Mike Rockenfeller in 2017.
• 3: Tracks where Corvette Racing has competed in each of its previous 20 years: Sebring, Laguna Seca and Road Atlanta.
• 4: GT class pole positions at Sebring for Oliver Gavin and Ron Fellows, tied for most in event history.
• 8: Sebring victories – a race record – for Johnny O’Connell, a Sebring Hall of Famer who drove for Corvette Racing from 2001-10. It includes one overall and seven class wins.
• 8: As in Chevrolet’s small-block V8. More than 100 million units have been sold worldwide and is the most successful engine in American motorsports.
• 11: Number of Sebring victories for Corvette Racing. It’s tied with Canadian Tire Motorsport Park for the most at any venue in team history.
• 12: Manufacturer Championships for Chevrolet and Corvette Racing since 2001
• 16: Number of GTLM wins for Corvette Racing since the start of 2014. That is the most of any manufacturer and team in the category.
• 20: Starts at Sebring for defending GTLM race and Driver Champion Jan Magnussen. He broke Johnny O’Connell’s record for consecutive Sebring starts last season.
• 21: Tracks at which Corvette Racing has won races – Baltimore, COTA, Canadian Tire Motorsport Park/Mosport, Daytona, Detroit, Houston, Laguna Seca, Le Mans, Lime Rock, Long Beach, Miami, Mid-Ohio, Portland, Road America, Road Atlanta, Sebring, Sonoma, St. Petersburg, Texas, Trois Rivieres and Utah.
• 24: Corvette Racing drivers at the Sebring 12 Hours through the years: – Justin Bell, Olivier Beretta, Ryan Briscoe, Emmanuel Collard, Kelly Collins, Marcel Fässler, Ron Fellows, Franck Freon, Antonio Garcia, Oliver Gavin, John Heinricy, Chris Kniefel, Robin Liddell, Jan Magnussen, Tommy Milner, Simon Pagenaud, Max Papis, John Paul Jr., Andy Pilgrim, Mike Rockenfeller, Scott Sharp, Jordan Taylor and Richard Westbrook.
• 30: Number of hours that Corvette Racing entries will be on track at Sebring during both the FIA WEC Sebring 1,000 Miles and the Mobil 1 Twelve Hours of Sebring.
• 107: Victories worldwide for Corvette Racing – 98 in North America and eight at Le Mans
• 215: Event starts by Corvette Racing since 1999.
• 43,107.40: Number of racing miles completed by Corvette Racing during the 12 Hours of Sebring. That’s close to two full trips around the Earth at its equator (approx. 24,900 miles).
• 281,650.90: Total number of racing miles completed by Corvette Racing since its inception. That is enough to launch a shuttle from Earth to the moon with more than 30,000 miles in excess. 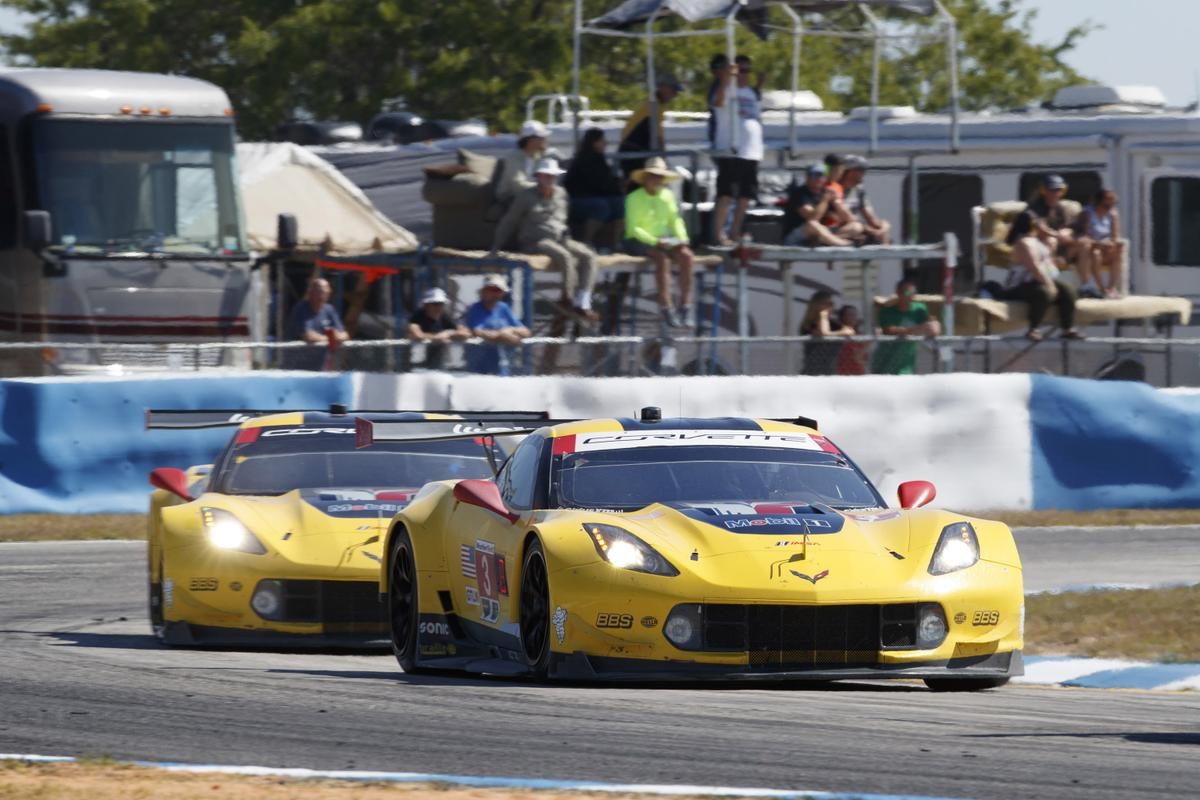