Milner second in No. 4 C8.R in GTLM front row lock-out for Corvette Racing


CORVETTE RACING AT WATKINS GLEN: Pole for Garcia, No. 3 Corvette
Milner second in No. 4 C8.R in GTLM front row lock-out for Corvette Racing


Saturday’s result continues Corvette Racing’s season-long run of first-place starting positions in each of the four IMSA WeatherTech SportsCar Championship GTLM races to date. The No. 4 Corvette started on pole at Daytona and Detroit with Garcia putting the NO. 3 C8.R on pole at Sebring.


The next several days – including a two-hour, 40-minute sprint race on July 2 – present an opportunity to make up for lost time after last year’s Six Hours was cancelled due to the COVID-19 pandemic. That meant Corvette Racing didn’t have the chance to show off the mid-engine Corvette C8.R during its debut season.


The C8.R and Corvette Stingray production car were developed simultaneously, and the race car and production vehicle share more technology and parts than any previous-generation Corvette. When initial Corvette C8.R design and development work began more than six years ago, Corvette Racing engineers worked closely alongside Corvette production personnel with a heavy emphasis on wind tunnel and simulation testing.


The Sahlen’s Six Hours of The Glen begins at 10:40 a.m. ET on Sunday, June 27. Same-day coverage will be available from 7-10 p.m. ET on NBCSN. Live streaming video on Trackpass via NBC Sports Gold and the NBC Sports App begins at 10:35 a.m. ET. Live audio coverage of qualifying and the race from IMSA Radio is available on IMSA.com, XM 202 and SiriusXM Online 992.


ANTONIO GARCIA, NO. 3 MOBIL 1/SiriusXM CHEVROLET CORVETTE C8.R – GTLM POLE-WINNER: "That felt really good. We're back on pole because the last time we were here, we on pole too. It's always fun to qualify at here. That's when you really get to experience Watkins Glen. You can really go for it and be really close to the walls. It was fun. Unfortunately I had one lap deleted (for track limits infraction), which didn't help but I was able to almost do it again. The C8.R was great again. It's always good to get on pole and to get one for Corvette Racing.
“It was a pretty good, intense qualifying like always. It’s always good to be out there in the best car possible and go for the fastest lap around this race track as well. That's when you get to experience this track. I’m really happy with that and how everything felt although I did have one lap deleted which confused me a little bit because it was like almost two laps after I actually did the lap time. Fortunately, I still had good laps left to be on pole and I was able improve again. It was intense, like always here at the Glen. It means a lot, but in a way it’s still six hours to go. It’s going to be a classic six hours here where everything will probably come down to the last two pit stops probably. I hope we can always be up front. I’m sure maybe we will cycle a few positions up and down with strategies. But you can’t ask for more, a Corvette one-two. So that’s pretty good.”

THE RACE OUTLOOK: "I think we will be alright. We saw this morning how cold it was compared to now. The car felt completely different in practice. The work we did yesterday was really good, and that will be way closer to what we will experience tomorrow. We were competitive on Friday and we will have to be the same in the race. Still, the Six Hours will come down to the last two or two-and-a-half. But we are in the best spot we can be."

WHEN YOU QUALIFY AT WATKINS GLEN, DO YOU HAVE TO SCARE YOURSELF A LITTLE BIT? "I think you need to close you eyes a few times! You need to get close to the walls here, for sure. That's the fun part of it. It's not that you have massive run-offs. You do at Turn One and a little bit at Turn Eight. The good thing is that you still have very interesting points around the track. This is very challenging and we're glad to be back."

RULES FOR TRACK LIMITS: "You need to keep two wheels on the curbs in Turn One and Turn Eight. Those are the two places where you can be really close to that. The one that got invalidated, it probably wasn’t the best laptime, but I’m sure they reviewed that. And that’s the thing. I would rather have the banner they have on Turn Eight so that gives everybody a heads up. We always try to find the limit and probably overshoot there."

WHAT WILL YOU DO BETWEEN RACES? “Just prepping the next race. Hopefully we have a clean race tomorrow so all we need is to redo the cars. Hopefully we won’t have anything to repair. Also I think I will be doing some inserts for Le Mans because we are running another chassis over there. They need to redo the car in only two or three days and that’s a big push for (the crew).”


TOMMY MILNER, NO. 4 MOBIL 1/SiriusXM CHEVROLET CORVETTE C8.R – QUALIFIED SECOND IN GTLM: “Obviously going one-two is a good start for the weekend. For us, I think the car was just a bit out of the window balance-wise to kind of put it all together. It seemed like Antonio had a couple of good laps there. I say we missed it a little bit, but the car was still super, super good and super quick. But when you are looking for a tenth here and a tenth there, those little differences definitely make a difference. We’ll definitely work on those and get it better for warm-up and for the race. Obviously the pace all weekend has felt good. The Corvettes are driving really ,really well. From the first session, the car has been super close on being a good race car. Sometimes you come to some race tracks and you are a little bit lost and you are playing catch-up. I think right now we are in a good spot. Hopefully that holds true for the race. The race is six hours so a lot can happen but this is a good start.
"Qualifying is always fun. It doesn’t matter where you are but especially here at Watkins Glen. You have new tires, low fuel and be able to really go for it... to really crash the curbs in the Bus Stop and driving the Carousel super, super fast with just a bit of a lift there... This track always feels fast but especially so during qualifying." 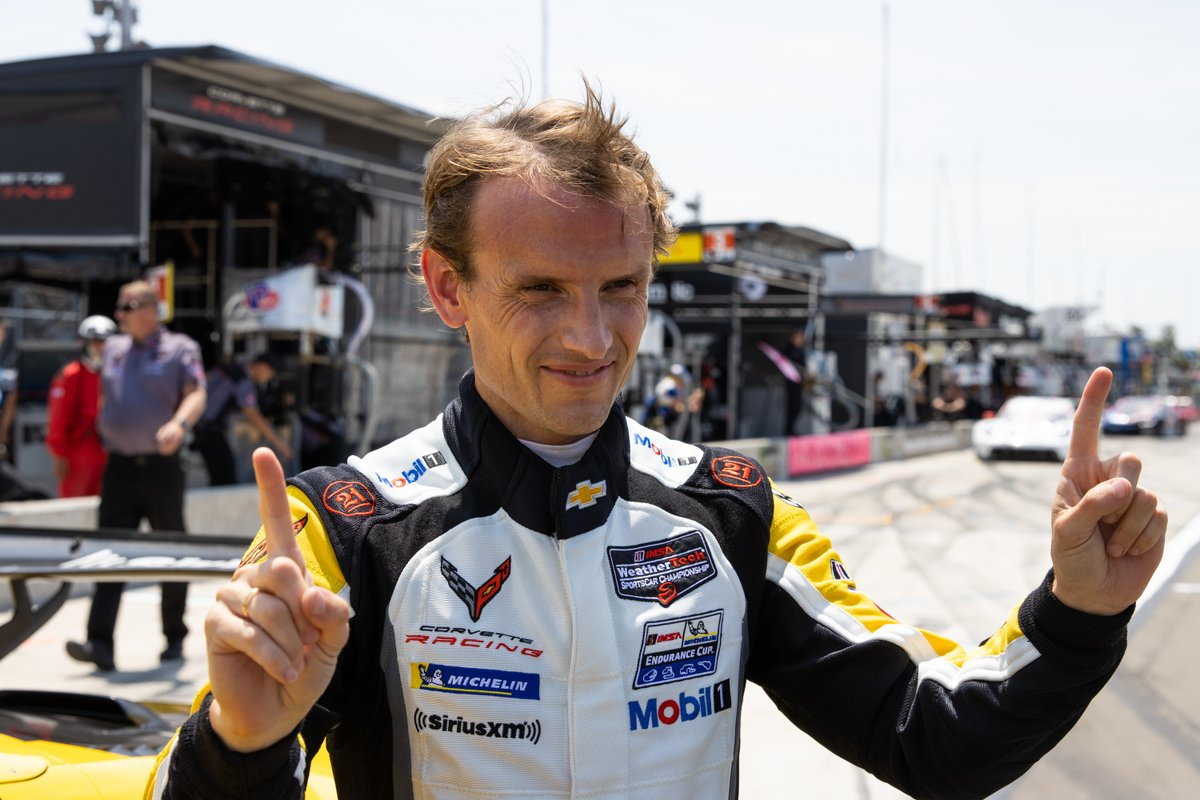