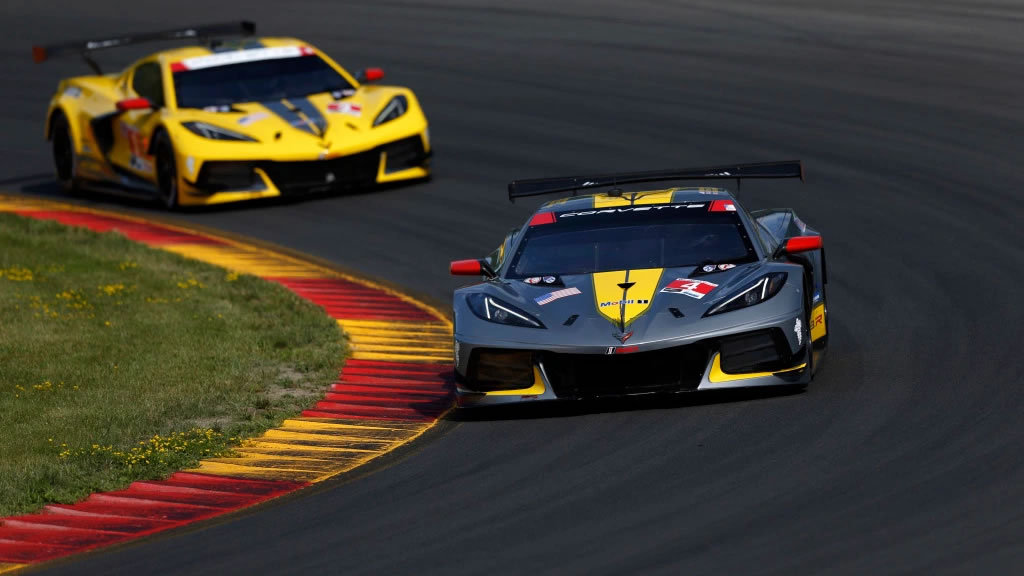 WATKINS GLEN, NY (June 27, 2021) – Corvette Racing returned to Victory Circle at Watkins Glen International on Sunday with a GT Le Mans (GTLM) victory for Antonio Garcia and Jordan Taylor in the Sahlen’s Six Hours of The Glen. They drove the No. 3 Mobil 1/SiriusXM Chevrolet Corvette to a steamy and hard-fought triumph for the team’s first win at Watkins Glen International since 2014.

Garcia drove the opening stint, Taylor was in the car for 2.5 hours in the middle of the race and Garcia closed the race as the pairing won for the second time this season.

The No. 3 Corvette was locked in an inter-team battle with Tommy Milner and Nick Tandy in the No. 4 C8.R, which suffered a mechanical issue late in the race that relegated it to fourth in class.

Corvette Racing will be back in action at The Glen for the WeatherTech 240 on Friday, July 2. The race will air live at 6 p.m. ET on NBCSN and Trackpass via NBC Sports Gold. Live audio coverage of Thursday practice along with Friday’s qualifying and the race from IMSA Radio is available on IMSA.com, XM 202 and SiriusXM Online 992.

ANTONIO GARCIA, NO. 3 MOBIL 1/SiriusXM CHEVROLET CORVETTE C8.R – GTLM RACE WINNER: “It was tough. I knew we when were free of traffic we would be okay. We had more pace than (BMW) did. But with all of these categories and as you found out, the last five laps, we found DPIs, all of the GT3s fighting for the lead along with some LMP3s. Everybody packed up there, and I had John (Edwards) coming on the last two laps. So it was intense, but I think the C8.R worked perfect today. It’s a shame in a way because we were looking for another one-two for Corvette Racing. I don’t know what happened to the No. 4 car there at the end. I’m happy to bring home a victory, that is what really matters… happy for Jordan, for Corvette Racing, for all the fans back here. I’m so very happy.”

JORDAN TAYLOR, NO. 3 MOBIL 1/SiriusXM CHEVROLET CORVETTE C8.R – GTLM RACE WINNER: (What makes you such a great duo?) “I think it is just the whole package with Corvette Racing and the C8.R. It is our first time here with the car. No testing and we rolled off the truck strong. It shows that this car is built for all the different tracks – street courses, Daytona, natural terrain circuits like here at Watkins Glen. It’s great to get another win. It’s a good day for us in the championship and a great day for Corvette.”