A couple weeks ago, Oliver Gavin announced that he would be stepping away from his racing duties with the Corvette Racing Team at the end of the season.

In a press release issued today by Corvette Racing, the team looks back at their record-setting career with Oliver Gavin.

Below is that press release:

CORVETTE RACING IN THEIR OWN WORDS: Saluting Oliver Gavin​

CORVETTE RACING IN THEIR OWN WORDS: Saluting Oliver Gavin

DETROIT (Nov. 12, 2020) – Track action for Corvette Racing at the Mobil 1 Twelve Hours of Sebring begins today, as does the final event weekend for Oliver Gavin as a full-time driver in the program. The Corvette Racing veteran will step away from full-time competition after a 19-year run that has seen him set nearly every record of success in team history.

Gavin and his full-season Corvette Racing teammates – Antonio Garcia, Jordan Taylor and Tommy Milner – give their thoughts on a record-setting career that started, of all places, at Sebring International Raceway in a preseason test ahead of the 2002 season… 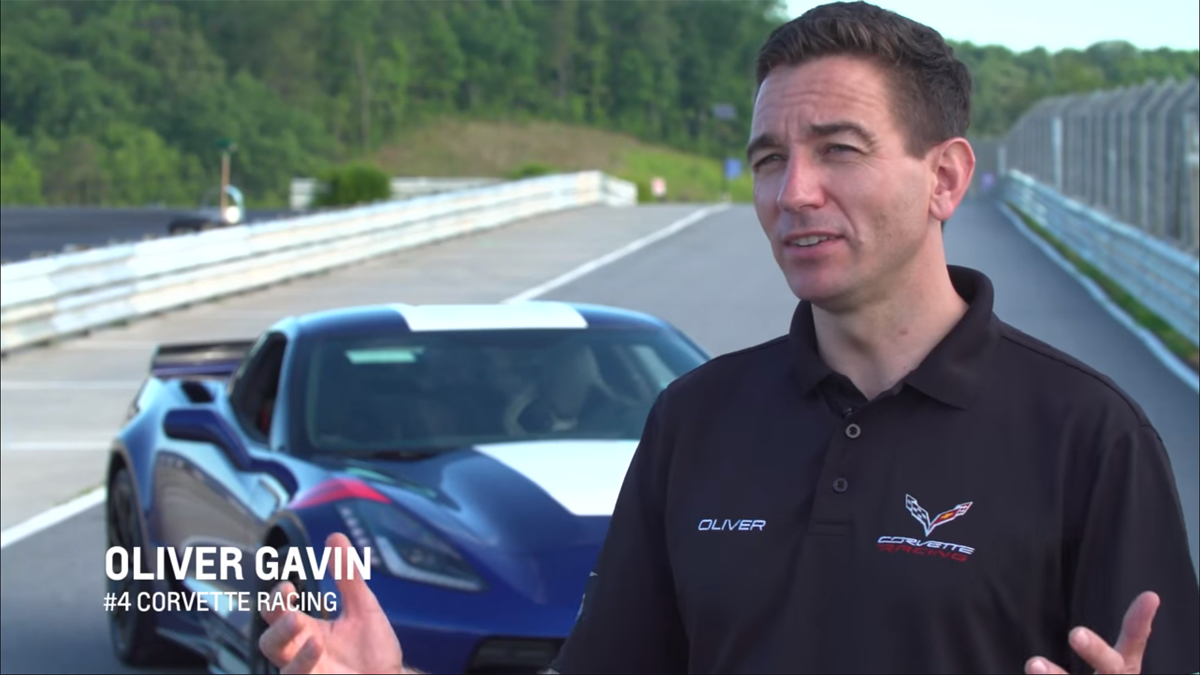 OLIVER GAVIN, NO. 4 MOBIL 1/SiriusXM CHEVROLET CORVETTE C8.R: “It’s almost like things are coming full circle. The first place I ever drove a Corvette was at Sebring in November of 2001. That test day is one I’ll always remember. Driving the C5-R out of the pitlane… the noise, the vibration, the rumble and just the physicality of driving that car was extraordinary. The torque from the motor and the delivery was like being in a force of nature in the way that it ripped around the track. Now all of these years on and being in this mid-engine C8.R – with all the downforce, the refinement and all-around feel of a well-refined racecar… it’s a joy to drive it around Sebring. We’ve worked for so many years with partners like Michelin and Mobil 1 that all refined their product and equipment to such a high level now. You know you’re going to get a great product straight out the gate and on the first lap. It’s been an amazing journey. Things will be emotional, for sure. Being with the same team for 19 years, you’d have to have a heart of stone to not feel somewhat emotional about it. But I want to go about and do my job right and well, and finish up with a strong result to get second place in the championship tied up for Tommy and I. Plus it would help to finish off my driving relationship with Tommy on a high note. It would be amazing to stand on that top step one more time.”

TOMMY MILNER, NO. 4 MOBIL 1/SiriusXM CHEVROLET CORVETTE C8.R – GAVIN’S TEAMMATE SINCE 2012: “Olly has been the single biggest influence on my time at Corvette Racing. We’ve had nine years as teammates and nine years of really good racing – the best races of my career and the best memories. He’s been an integral part of what you see on the results sheets of the successes I’ve had. His contributions to the team are long and storied. I got my first ALMS win in 2012 in our first season together. I’ll never forget standing there at Long Beach in pitlane, watching the screens and not believing what I was seeing. I had been racing in the series since 2006, and to finally get that first win was completely on him. I brought the car back to the pits in one piece and he did the rest. Having him as a teammate with how fast he is and how experienced he is… to be able to lean on someone like that in a growing year for me was huge. When you look at results and stat sheets, his contributions to Corvette Racing are obvious. On top of that, everything behind the scenes as a teammate is as good if not better than what you see on the track. And he’s maintained that same style and passion to find every tenth of a second that he can and motivating all the guys on the team to get as much out of themselves as they can. There is no doubting his will to win and passion for success.” 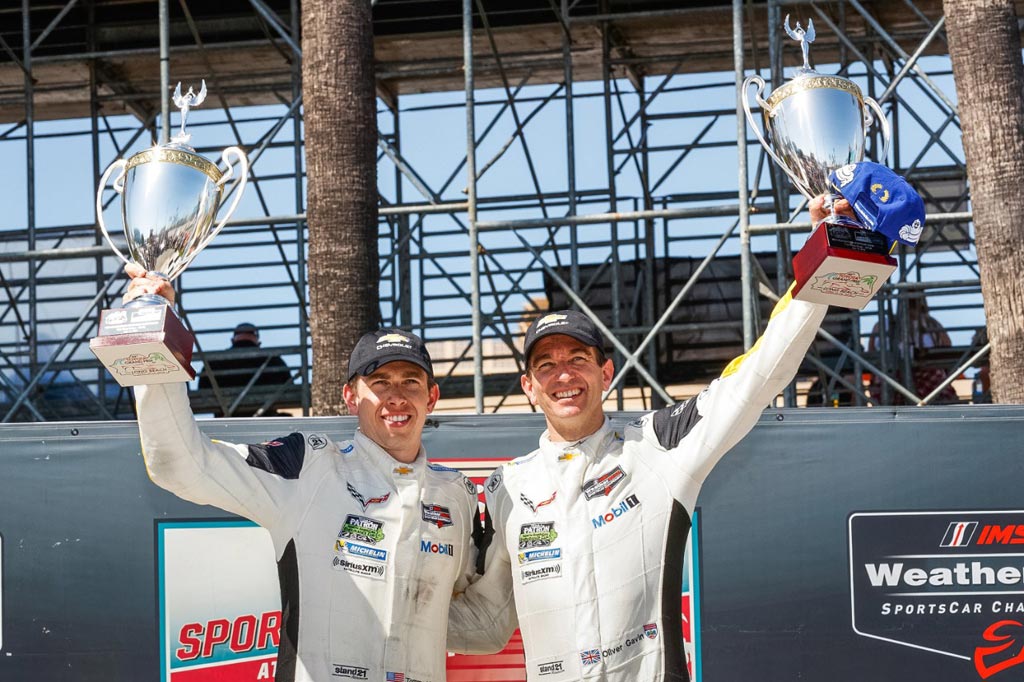 ANTONIO GARCIA, NO. 3 MOBIL 1/SiriusXM CHEVROLET CORVETTE C8.R: “Oliver has been a big influence on me in my career. When I was driving for another manufacturer, Olly and Jan (Magnussen) were the only Europeans at Corvette Racing. Those were the two I really paid attention to. When we started competing against Corvette, I knew Olly was one of their strongest guys. As soon as I saw the opportunity to join Corvette, he was one of my references. I learned from him but also had to fight with him, which at the beginning was a struggle. I was very inexperienced compared to where I am now, and he was amazingly fast. It took a long time for me to match his pace, but slowly and slowly I took the lessons I learned from him; I think in past years we’ve started to learn from each other. Being able to compete together for so long as teammates gives you that opportunity. I feel like we both brought the entire team up.
“One of the things that Olly has – similar to me – is that he is super competitive. That’s why he has been and continues to be so solid now. He’s very professional in the way he prepares for each race. One of the important things I’ve gotten from Olly is the amount of preparation he puts into each season and every event. That’s been a huge reference for me – to see someone who can go that fast but is still a little older than me. It’s a great target. If I can get as far he has with the team, I will be more than pleased.”

JORDAN TAYLOR, NO. 3 MOBIL 1/SiriusXM CHEVROLET CORVETTE C8.R: “Oliver has been a staple of Corvette Racing. As a fan growing up and watching the team, he was there and always was the one to root for – the top dog and winning a lot of races. So I was a fan to begin with and then moved into competing against him in GRAND-AM when we were both racing Camaros. I remember my first race against him at VIR. I was terrified that I was in similar equipment and on the track at the same time, just knowing that I have this legend I’m racing against and how could I ever compete against him. Since then, he’s been a good friend and teammate even when we weren’t in the same car. He always treated me so well and offered a helping hand when I needed it or gave advice if I had questions when I went into the third-driver role at Corvette Racing. That was huge for me as a young guy – to come into such an intimidating team and organization to have someone at that level to be mentor. He’s been a huge help. They say to never meet your heroes, but to meet him and work with him is everything I could hope for. It’s been great to spend more time with him, getting to know him better as a person, a dad, a friend and an athlete has been a lot of fun. We’ll all miss him inside the team, but I’m sure we’ll stay connected and work with each other down the road.”

The Mobil 1 Twelve Hours of Sebring is set for 10:10 a.m. ET on Saturday. NBCSN will air the race live from 10 a.m.-3 p.m., and 6-10:30 p.m. ET; live network coverage on NBC is 3-6 p.m. TrackPass on NBC Sports Gold will offer live streaming of the full race starting at 10:05 a.m. ET. In addition, IMSA Radio will broadcast the race on IMSA.com, which also will host live timing and scoring. The race also will air on XM channel 202 and SiriusXM Online 972.