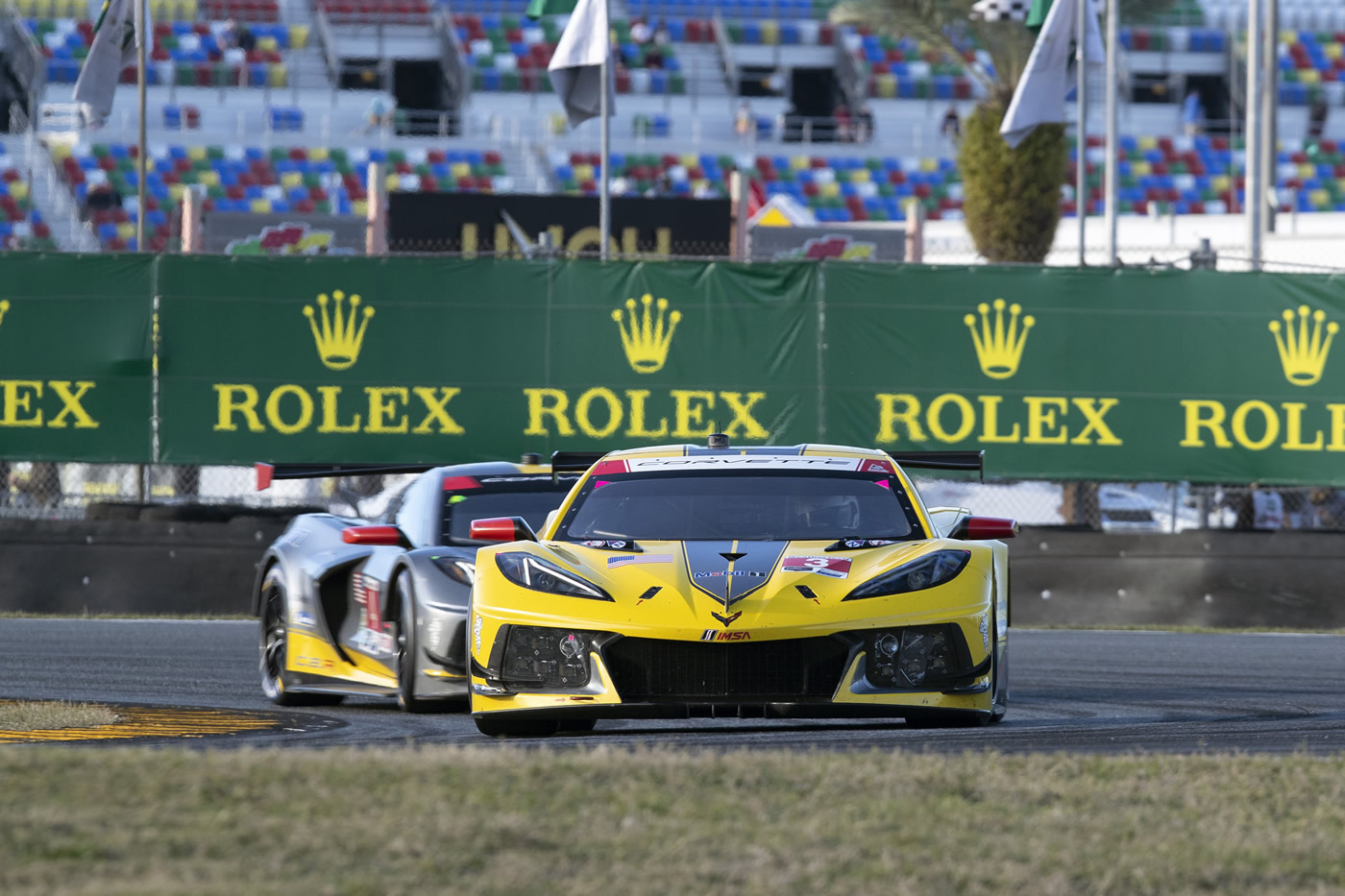 Corvette Racing's Jordan Taylor in the Number 3 and Tommy Milner in the Number 4 Corvette C8.R take first and second place in GTLM at the Rolex 24 Hours of Daytona​

Congratulations to the entire Corvette Racing Team for another victory at the Rolex 24 Hours At Daytona!

This is the first endurance win of the season for the Corvette Racing Team.

This was a notable race for the Corvette Racing team as today marks twenty years ago that Dale Earnhardt Jr. and his dad ran the Number 3 Corvette at the Rolex 24.

Below is the halfway report from the Corvette Racing team with commentary from the drivers: 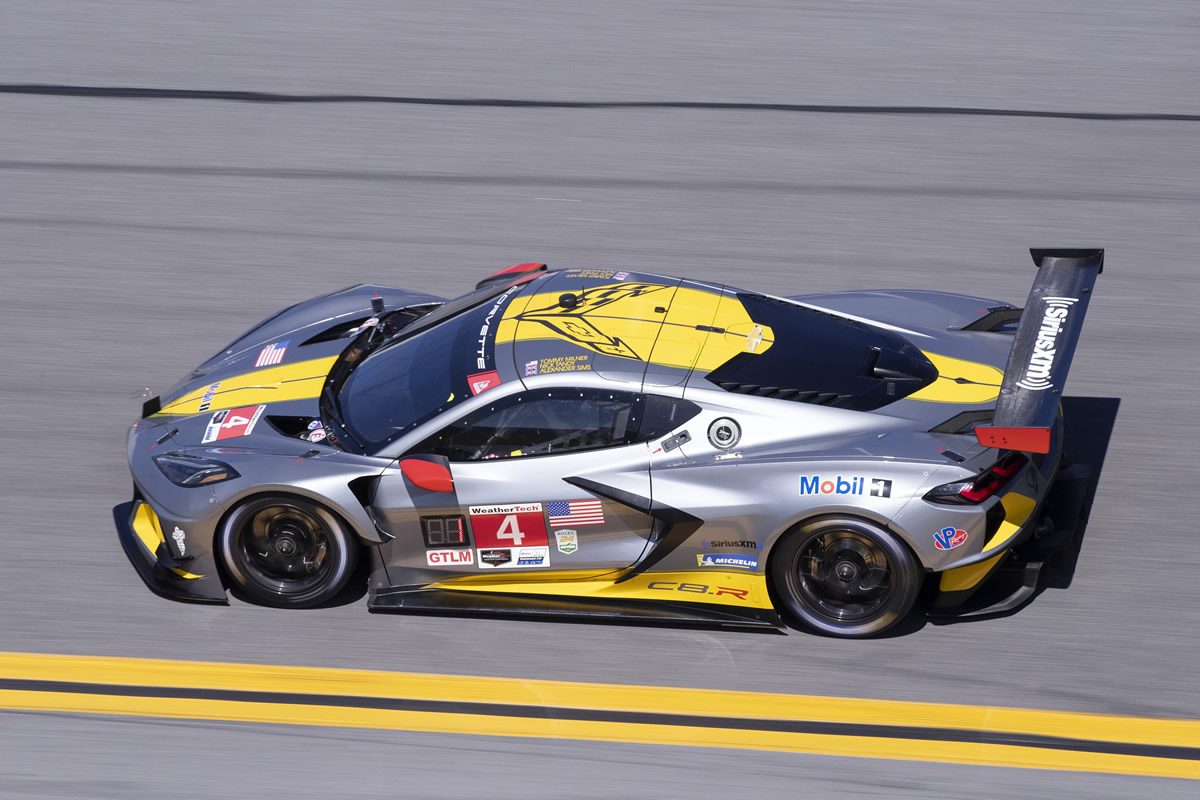 DAYTONA BEACH, Fla. (January 31, 2021) – Corvette Racing continued its strong showing past the halfway point of the Rolex 24 At Daytona. The pair of mid-engine Chevrolet Corvette C8.Rs ran first and second in the GT Le Mans (GTLM) class of the IMSA WeatherTech SportsCar Championship with Nick Tandy ahead of Jordan Taylor entering the race’s second half.

The GTLM field was in the midst of a nearly 90-minute, green-flag run as the Rolex 24 moved into the final 12 hours. Tandy, in the No. 4 Mobil 1/SiriusXM Chevrolet Corvette C8.R, led by a little more than five seconds over Taylor and the No. 3 Mobil 1/SiriusXM Corvette. The pair of Corvettes led all but two laps in the first 12 hours, a testament to the development and execution by the group of six drivers, the engineering team and crew members.

Tandy took over in the No. 4 Corvette after a triple-stint from Tommy Milner. The No. 4 Corvette moved into the lead on pit strategy near the nine-and-a-half-hour mark as Tandy was able to get out of the pitlane and up to speed before Taylor could come around at speed. He had taken over two laps earlier from Garcia, who finished a triple-stint of his own.

Both Tandy and Taylor were in the middle of their own triples at the halfway mark before handing over to Alexander Sims and Nicky Catsburg, respectively.

ALEXANDER SIMS, NO. 4 MOBIL 1/SiriusXM CHEVROLET CORVETTE C8.R: “It’s going fairly well so far, I would say. I had my first two stints in the Corvette at Daytona, and I feel like I’m learning a lot still. Those were the first two full stints I’ve done, and I learned a lot about the evolution of the car over that stint. So we’re at the front of the field. It may look like it’s all under control, but we’re pushing hard and not leaving much on the table. We’re in the right position at the moment.”
STAYING OUT FRONT: “Minimizing mistakes is the first crucial point that we need to execute properly. Beyond that, the class is so incredibly competitive despite there only being five cars on the lead lap – all five are absolutely in the hunt. It’s going to be about that… making sure we don’t make any major mistakes and keeping the car in one piece for the end.”
BALANCE OF THE CAR FROM DAY TO NIGHT: “I didn’t drive in the day yet, but from the laps we did in practice I wouldn’t say things change a huge amount. The track temperature dictates what tire spec we can run. But no the car seems be reacting well to the temperatures in the night and I think the other guys were pretty happy with the Corvette in the day at the start of the race.”

TOMMY MILNER, NO. 4 MOBIL 1/SiriusXM CHEVROLET CORVETTE C8.R: “Things are going OK at the moment. We are fighting hard with our teammates as well as with the Ferrari and two BMWs not far behind. The cautions bunch us all up again so it will stay close all the way to the end. We are struggling with a gearbox gremlin which hasn’t become more than a nuisance yet, but it’s something we need to keep an eye on. The crew are making great pit stops, and Alexander and Nick have hardly missed a beat. We have a really good Corvette. I hope we can keep up this fight all the way to the end.”

NICKY CATSBURG, NO. 3 MOBIL 1/SiriusXM CHEVROLET CORVETTE C8.R: “We’re doing OK. We are 1-2 in class, which is always good. And I feel like I am learning still. The first stint I did wasn’t the best one. I was struggling with car balance, but we made some changes and the second one was better. So we are still working on the car even during the race. I feel like we are making improvements. It was fun to be following Alexander for almost two hours. We did OK but we need to keep our heads cool and focus on the last couple hours of the race. For that, we need to make it there.”
ON THE RACE START: “As far as I can judge, if you’re the leader then you are deciding the pace. So whatever happens behind you is not your fault. Obviously you should not slow down, but I don’t think we did. The BMW was going a bit too soon and touching the Porsche. It was very unfortunate. I don’t think it was no one’s intent to hit anyone there before the actual green flag, but these things happen in motorsport. It wasn’t anyone’s fault. I don’t think the two Corvettes were over-slowing, and I think the BMW meant to hit anyone there. It happened, so let’s focus on the race ahead of us.”
STAYING OUT FRONT: “We really need to focus now on keeping our heads cool. It’s nice to be ahead now but it really doesn’t mean anything. There are going to be so many yellows and more incidents. We need to stay out of trouble and make sure we have a Corvette to be fast at the end of the race.”
BALANCE OF THE CAR FROM DAY TO NIGHT: “I do feel a slight change when the temperature drops. It’s nothing huge and nothing we don’t know. We can make some small adjustments to the car to help that, so no big surprises for us.”

ANTONIO GARCIA, NO. 3 MOBIL 1/SiriusXM CHEVROLET CORVETTE C8.R: “We just keep running and changing the car. The track conditions have been changing quite a bit… the temperature, especially. We are trying to react to that. There were a few stints where the car felt good and some others where it wasn’t as good. We are still up there, which is the main thing. It’s difficult not to push and wanting to be up front, but there is a long way to go. We’ll see, but so far I think we can continue this. I don’t know what our competitors have for us in the end. They may be good, too. We’ll continue to be as clean as possible.”
FUTURE CHANGES TO THE CAR: “The guys will carry on making their changes. The track will continue to develop. I don’t think it’s going to be any colder the rest of the way. We’ll continue to follow the track. I don’t know what to expect yet. I’ll probably get the sunrise stint depending on the schedule. We will see where we are then.”