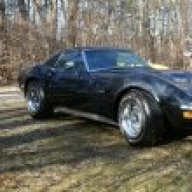 Vettehead Mikey said:
Two wrongs don't make a right. Your advance curve is still 'too much too soon'. By having all the advance come in so early, the initial advance has to be retarded from optimum setting to compensate and you end up with less than ideal 'all in' mechanical. Being that the stock curve was far lazier than what you have now and you've got the strongest springs available, the weights must be some weird aftermarket set up.
Click to expand...

I'm guessing that whatever happens between those two extremes is kinda "let then numbers fall where they may" type of scenario.

Granted, I'm measuring all this with my wife in the drives seat calling out rpm ranges. So there is a error factor in communications, and a potentially inaccurate tachometer.

I will borrow my friends inductive digital tachometer. . .and try to get a more "real" map of what is actually happening. I will post that here as soon as I can get the numbers.

This morning I put 12 gallons of 93 octane in the tank. I calculate that I'm down to approximately 94 octane. I beat on it during my morning commute and could not get the noise to re-occur. It was cool out this am (48 F). Supposed to be 70 F today. . .so I will try again on the ride home.
G

I have run a stock recurved HEI distributor and now run an Accel recurved distributor in my modified '76 stroker.

I never cared or recorded what the initial timing was, only set it for 35* all in at about 2600 rpm. Per Lars' papers, I picked a vacuum advance unit that would give me the advance that I wanted at my 13" of vacuum. Total is about 50* initial+mechanical+vacuum. I ran this setting on my prior slightly modified 350.

Do you have Lars' papers?
G

Don't forget, the amount of quench you have can determine if you have detonation. I believe ideal quench is 0.038 to 0.045.