I looked through the threads and either did not see this or totally missed it.
Q. Is there a way to manually lower a non functioning electric antenna ? I would like to put a car cover on the 81 while it is garaged for the winter and have yet to find one that comes with a malfunctioning antenna sleeve !

Is it non functioning,as in it just doesn't work,or it is not hooked up or there is some issue with the wiring.......
Bill and Gail...save the wave

I think that it is non functional mechanically (the motor is shot) as it will not go down with any pressure.. no motor noise etc.. so it is locked in place. I have not checked to see if the connection is intact however ( I have not pulled up the carpet to see if it is connected).

I think it would be connected to the back of the radio,eg power on-ant up
off-ant down
i'll check my assmbly manual tomorrow and see if there is a plug on the antennna itself...
Bill and Gail...save the wave

Bill: Thanks for looking at the AM.. I need to get one of those and also a Shop Manual.. I think.. I assume it is connected ok to back of radio as reception is ok.. I just recall reading somewhere where there is another connection to it in the back that could be unplugged. Thanks very much ! 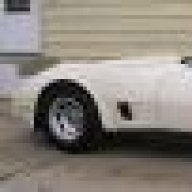 There is not a plug, the wires go directly into the antenna assembly. Did you buy the car recently? If so the previous owner may have cut the wires to the antenna, if not the relay for the power antenna may have gone out. The relay is located under the compartment behind the passenger seat. The antenna is actually quite simple to remove, just unscrew the antenna bezel nut on top and the brace underneath, it is all accessible from the outside of the car. The worst part is removing the bracing as the muffler is in the way, I disconnected the muffler hanger and it made it alot easier.

You cant just stuff it down the hole.. ?? I guess .. I was looking for a quick fix.. I plan on either reparing.. replacing it later.. just want to put a cover on it soon..
[SIGPIC][/SIGPIC]

You might be able to get it down far enough to put the cover on if you take the bolt that braces the antenna to the body off, you will probably also need to unscrew the antenna cable from the antenna as I don't think there is enough play to lower it that far. Mine was not functioning when I got it and the previous owner had cut the wires to the motor so it came out pretty easy.

Ok.. that is a quick fix.. get the mast down to put the cover on. I dont know the history.. I have had the car 2 months or so and I need to check and see if the wires were tampered with etc.. Thank You. Good Advice !

Anytime, I hope it helps.
L

You could try applying +12v to the antenna motor at the motor and see if it works. A little difficult to get to with the muffler in place....but as long as the muffler is cool....might be able to...or you could cut the two wires going to the motor and then apply +12v across them.

If the motor comes to life...and the antenna tries to go up....just reverse the connection and the motor will turn the opposite direction and lower the antenna. Connect one wire to +12V, and then just touch the 2nd wire with the negative side...probably best to put an in-line fuse in...otherwise if the motor is locked...you'll burn a wire as a fuze. I think 10amp is plenty.

Thanks for all the advice. I will try and see if I can remedy it this weekend.

I repaired my antenna last week on the 81 I just got. In my case the antenna would also not go down, however, it would go up about 3 inches if I pulled on it. I decided to pull the thing out and see what was wrong.

First off the retaining nut on the top was a bit hard to get loose. I don't know if there is a proper tool to use on this nut but I used a set of needle nose pliers with the tip of the jaws bent 90 degrees. The jaw tips fit well into the slots of the nut.

The bracket at the bottom can be removed from the antenna to get a little bit more room to get the thing past the muffler.

Next I needed to disconnect the wires from the antenna motor. I found that there is a connector behind the drivers rear speaker. There is also a connector for the antenna wire in there. After pushing out the large grommet from the inside the wires,grommet, plug and antenna could be removed from the car.

I found that the cable had broke, this is why the antenna could go up but not down. The motor had also been disconnected at that connector behind the speaker that is why the motor would not turn. I can only assume that the previous owner had disconnected the motor to stop it from continuously running as that is what it would do with the broken cable.

I found 3 wires coming from the motor-- white,gray,dark green. If you put 12 Volts on white and ground on green the motor should turn in the down direction. You may be able to stuff the antenna down with the motor turning the proper direction, but it might be better just to take the whole thing out since you have already got this far. It will give you a small project for the winter as parts are available from corvette parts sellers or maybe even GM.

As for mine I was able to repair the cable end for nothing.
You must log in or register to reply here.