For Sale is my 1965 Coupe.
Body off restored (except for the paint) completed in 2003 . I purchased the car in March of 2004 approx 500miles after the restoration was completed.
I had the car painted in 2004/2005 the original Milano Maroon (basecoat / Clearcoat paint).
Interior is black leather. Seats were redone in 2005 by Al Knoch because I didn't like the job they did during the restoration.


Car has actual, real-deal GM side pipes but it's not an original side pipe car - it was converted by a prior owner


Shifter is a Hurst but it looks stock


Frame and birdcage are rust free and very solid!!!!!


Car was built Feb 1965 and is listed in the NCRS guides as the actual final car of Feb's production in '65.


I have all the major parts in a spreadsheet with their parts codes, dating codes, etc


link to the section on my '65 Vette on my website here showing pictures from all the work done on the car - paintjob, engine compartment, interior, etc
http://www.lbfun.com/Corvette/65Vette/65vettehome.html

*NOTE - these pics were taken BEFORE the new tires were put on in 2010. The new tires are blackballs, not the whitewalls as pictured.

Haven't seen you on here for a long time Barry. Beautiful car and good luck with the sale. Fellow club member is selling his restored 67 vert and while I have the desire, my bank account says no. Are you replacing it with anything? 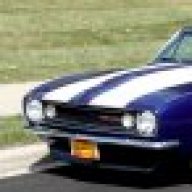 Baldie88 said:
Haven't seen you on here for a long time Barry. Beautiful car and good luck with the sale. Fellow club member is selling his restored 67 vert and while I have the desire, my bank account says no. Are you replacing it with anything?

yeah, i haven't been posting much anywhere anymore - too busy with work and life.....

no, not replacing the car with anything. Unfortunately once it sells I'll be Vetteless and toyless, but i need the funds to do an expansion on my business so priorities take precedence.
:cool :cool
1965 Milano Maroon Coupe 327/365
1978 Dark Blue L82

Barry, long time no hear!
Sorry to see you're selling the '65 - it's a beautiful car and knowing you it's a great running (and looking) car!
You were always one fussy guy with your cars - like most of us, but maybe even a little bit more!

I hope all is well and good luck with the sale!

c5vetter said:
What color body and top on the vert? Any other information?
Click to expand...

For C5Vetter, now I understand your question. This is the link for my club members car: Chevrolet : Corvette Convertible in Chevrolet | eBay Motors. It's a fantastic car. The reason he's selling is he has his eye on a 57 Bel-aire. He still has a 2009 coupe but I like to have his car in the Veterans Day parade that I plan.

I don't want to butt in on Barry's thread as his car is fantastic also. If you go back to some of his older threads you'll find that the car has been meticulously maintained.

I'd love to have either one of these cars but mama says no. I think she wants to spend the money on the soon to be born grandson!

Good luck with your sale Barry. Someone is going to get a great car.