As a one-of-a-kind race car and an advanced styling exercise, the SS ultimately fell victim to corporate ideology

There are dreamers and there are racers.

The one thing that history — and the Corvette SS — has taught us, is that mixing the two can be an exhilarating, awe-inspiring . . . and downright frustrating experience.

On looks alone, the stunningly beautiful Corvette ‘Spyder Sport’ should have been a huge success on the race track. However, its designers discovered that dream-car styling was no substitute for careful execution of the mechanical details.

It was a time when Chevrolet was not only interested in going fast, but looking good doing it, an idea that was intended to boost sales. Form over function to certain degree.

The origins of this glitzy, but ultimately doomed experimental racer go back to the mid-1950s when Chevrolet brass began to seriously develop the Corvette as a world-class sports car. Under the direction of Ed Cole and the impassioned encouragement from chief engineer Zora Arkus-Duntov, the underpowered boulevard cruiser began its transformation into a serious performance-oriented import-fighter.

Real-world development of the Corvette meant racing it. In 1955, Arkus-Duntov personally drove a V8-powered prototype to a record-breaking time in the fabled Pike’s Peak hillclimb, a grueling 12.5-mile assault up the side of a Colorado mountain. The following year on the sands of Daytona Beach, Fla., the Corvette established a new benchmark for the flying mile at more than 150 m.p.h. ’Vettes were also entered in the Sebring, Fla., 12-hour endurance race, capturing the first-place prize for their class. Successes at such image-enhancing contests translated into increased showroom activity and led to further development of the sporty coupe, especially in the areas of the engine, suspension and chassis.

The wins also attracted the attention of Harley Earl, then General Motors’ head designer. After Earl’s son, Jerry, purchased a Ferrari to go racing, the understandably shocked and embarrassed father commissioned his stylists to build a special racing ’Vette. The result was the SR-2, a relatively stock-looking machine with the exception of a large D-Type-Jaguar-inspired fin located directly behind the driver’s seat.

The SR-2 ultimately proved to be too much race car for Jerry Earl, but was also too heavy to be competitive, even in the hands of professional drivers. (Shorn of about 300 pounds, the car eventually did manage to establish a record for the standing mile at Daytona Beach.)

By then, the senior Earl had developed a serious case of racing fever. In July of 1956, the all-or-nothing designer commissioned a full-blown race car that could beat the Europeans at their own game.

The Corvette SS was born.

Much of the car’s basic structure was designed by Arkus-Duntov, who used the tubular space frame of the Mercedes 300SL as his template. In the meantime, Earl’s design studio, again using the D-Type Jag for inspiration, began with the body.

The original fiberglass prototype was dubbed the XP-64. The letters stood for Experimental Pursuit, which the aircraft-loving Earl borrowed from planes that were in the early testing stages. A second car, however, featured a considerably lighter magnesium body that housed a 283 cubic-inch fuel-injected V8 that made 307 horsepower at 6,400 r.p.m.

The finished product left spectators wide-eyed and slack-jawed when it first appeared at The 12 Hours of Sebring. The SS was perfectly finished to the point that it looked far too delicate to perform as an all-out competition car. Its wide grille contained a full row of ‘teeth’, just like a regular production ’57 Corvette, and there was also flashy stainless-steel trim along the sides and across the tail.

The fiberglass test version qualified on the pole, while the lighter-by-400 pounds magnesium car was prepared for the actual race. The reason for this was that Earl was worried about damaging the paint job on the “real” SS.

From the beginning, it was clear there were problems. The metal body retained too much engine heat, which sent cockpit temperatures soaring, and the brakes began to fail. The final straw turned out to be the incorrectly installed rear-suspension bushings, which also failed, causing the back wheels to bang into the inner fenders.

Grand Prix ace Piero Taruffi, who had been specially hired by Chevrolet as one of its drivers, brought the car into the pits, deeming it unfit to finish . . . a little more than an hour into the 12-hour event.

Down, but not out, the team made plans to build three additional cars to compete in France’s famed 24 Hours of Le Mans endurance event. However, the newly agreed-to (at least publicly) competition ban that had the Big Three automakers end official factory support of any type of motorsports, spelled the end for Harley Earl’s dreamy dalliance in the racing world.

Today, the museum-piece SS is occasionally allowed to stretch its legs at various historic revival meetings, showing the world how beauty and brawn once merged and almost — but not quite — created motorsports magic. 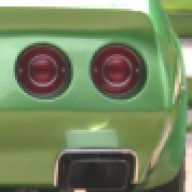 I took this photo of the car in our shop in 1989 while we were hauling to a show. Had to unload it to repair the trailer. Very cool car.