After chasing a multitude of problems in recently acquired 85, I was flushing the coolant system to rid it of the green coolant and crud from acouple of years of sitting and replacing it with good orange stuff. The previous owner said he had the water pump replaced as it started to leak. I guess so, as there was signs of rusty water in the front engine compartment. On the crank pulley and droplets scattered about.
After drain system and refilling then draining/refilling again I added some cleaner and started to bring the car up to temp. Got the thermostat to open and slowly added more water until it wouldnt take anymore. I was going to do a short run to allow the prestone cleaner time to do its magic when I noticed the temp climbing. Had the heater on hot but no fan , so I kicked it on to help cool things while I headed back home. Cold air. Lack of coolant. Oh well must have had a burp of air left I thought. Got home and temp was 250!!!! and rising!!!!!!
Shut it down and waited!!! After temp dropped into the 240's I cracked the cap relieved just a little air and steam, hmmm expected a gush of coolant and steam?! Well, the level was out of sight so slowly added more but the temp rose too quickly again so shut it off and go find something to do for awhile.
Level still out of sight on return so fill it again and sure enough theres a leak. Coolant coming out of the flywheel covers drain hole! One of the freeze plugs on the back of the block must have popped a side or corroded through with the addition of cleaner!!
With a strickened(sickened?) heart I called it a day and made arrangements to pull it at a partners fully equiped shop as there is a S-10 under my hoist getting a heart transplant.
Will check tomorrow by pulling the cover to make sure that is what it is but if it is coming from elsewhere and following down the block and trannies case and somehow coming out the cover I dont want to know about it until after a night of sleep.
As it is I plan on replacing the front oil seal as its leaking. Probably will need a sleeve kit as the oil on underside is fairly heavy. Will also send the injectors out to be tested and rebuilt. And will clean, inspect anything else I will have gained access to.
With 83,000 miles and good oil pressure I see no need to do more. The bottom of the oil pan could change that. Depends how many bad signs I find there, if any.
As far as the rest of the car I fill be changing rear diff lube and greasing all fitting, repacking or replacing front bearings and will research more on back hubs. Brakes as needed, new fluid and disassemble, clean and neverseize, calipers. She will also get new skins on the rims.
Would like to here any suggestions from those of you who know more about these critters since the engine is out.
Thanks for listening to my whining, TC
And still...,

but dam the luck

Sorry to hear about the freeze plug. My wife has a 97 Jeep that had a freeze plug corrode when it was only 3 years old. It is due appparantly to electrolysis. One of hers was not accessable so we used one of the freeze plug replacements that you put in the hole and then tighten the bolt and it expands and tightens up in the hole. Has never leaked again.
Ken Martin
96 CE LT4 Z51
Dacula, GA

First off, why in the world would you want to switch to DexCool? Our cars were made for the green stuff, so you should keep it that way. Read around and you'll see people have had problems with the orange...

Second, when you buy the new freeze plugs, buy the copper ones. They're a little more expensive, but don't react with the coolant and will last much longer. Do all of them since the engine is out (some are only accessible that way). 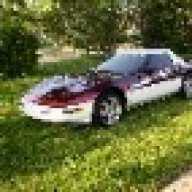 I think you meant Brass.
Life is not a journey to the grave with the intention of arriving safely in a pretty and well-preserved body, but rather to skid in broadside, thoroughly used up, totally worn out and loudly proclaiming: "WOW! WHAT A RIDE!!"
L

For the tip on coolant. Will do a search and see whats up for my information.
Already planned on replacing all the plugs with brass ones.
also good to hear its not unusual for these to go. (A 1st for me after 25 yrs of various home built,shade tree hot rods)
The zinc hanging in the radiator tank should have clued me in...., maybe.
Never seen one of those before.
Gasket kits are cheap, so will probably take a look at things. Besides if the plug rotted I wonder how the head gaskets and coolant ports look?
Depending on time and machine shop availability might just rering and rebearing the motor while out. Cleaning up the heads and new guides and seals willbe the costly part. Fresh lifters, rings, bearings etc. will give many more miles of pleasure while I learn what works and doesnt work as far as preformance parts. All ready learned alot on that subject here at CAC.
Will update you as things progress.
Such as Me saying, what the frheck, cam,chip, exhaust, and gearing change!!
In for a dime, in for alot more!
Later, TC

Brass! Argh. Yes, I meant brass... Thanks for the correction. I bought the silly things, you'd think I'd remember what they're made of.
[RICHR]
You must log in or register to reply here.