Just sold my 85 vette and now have my 81 vette sitting in the garage.....well it was in the garage. I parked the 81 in the garage, left the house for about and hour.....When I retuned home there was an awful gas odor in the garage and the living room. I checked under the hood looking for possible gas leaks. I also checked for gas that may have leaked onto the floor ...... No evidence of either. To make a long story short, the 81 vette in back in the driveway. The vette had not been run prior to parking it inside. Wife say's to leave it outside until I get rid of the gas odors!!!!!!!!

Anybody with suggestions as to a possible problem and cure for this issue? Sure want to park the new baby in the garage and begin work

Check the charcoal cannister under the left front fender,behind the wheel.One possibility is this could have raw fuel in it.Of course check for fuel leaks especially around the fuel pump.

I can cure it by keeping my tank over 1/2 full.

In the heat, if the tank gets below half, I will get a fuel smell while driving. This does not happen under any other curcumstances, and if I keep the tank full, I have no problem.

Make sure you inspect the tank itself carefully as well. Gas evaporates fairly quickly, so you may not be seeing any puddles on the floor. Mine developed a leak right on the seam in the rear of the tank - it leaked slow enough that I could only smell the problem at first because the small puddle dried up fast. I ended up having the tank removed and re-welded, plus I sprayed it down with a can of zinc paint (~$10 from Corvette Central). I'm happy with it so far, especially since it's SO difficult to find a replacement tank for 78-82's.

In the heat, if the tank gets below half, I will get a fuel smell while driving. This does not happen under any other curcumstances, and if I keep the tank full, I have no problem.

Isn't this what the charcoal cannister is supposed to do, ie, collect these gases coming off the fuel tank and burn them as part of the combustion process?

I just know that if I keep my tank full on hot days, it won't have a fuel odor.
Heidi

If your car eats gas like mine, that is a fill up about every 60 miles.:cry


vettepilot said:
Did you say it was metal or plastic. Most evaporative canisters are black plastic, the metal cans are usually for the vacuum reserve. The evapoative canister is associated with the fuel tank/ carb vent lines. The fuel vapors flow into the charcoal inside, are trapped and retained by the charcoal, then when the engine is started the vacuum line sucks fresh outside air through a filter on the underside of the canister, through the charcoal, and thus removing the trapped hydrocarbons from the charcoal.
vettepilot
Click to expand...

See if replacing your charcoal canister will make this problem go away. 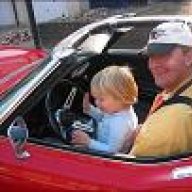 I had similar problems with gas fumes and odors. Finally I found out that the lowest part of the gas tank's bottom (it's not completely leveled) was totally gone. Quite a shock I have to admit when I gfound this out. Replaced it with a 74' tank which fits perfectly (they're all the same) and a lot of the gasoline stench is gone. During driving I still smell something once in a while but nothing alarming.

There is a couple of spots you could take a look at which might be the cause of the problem. As some of the other wrote before the canister is one possible cause. Check for leaks or lots of gas in the canister. Carb itself could be a source too. The accelerator pump seal shrinks or deteriorates over the years and can finally start pushing out gasoline on top of the carb body. In excess it might even flow onto the manifold and eat away the paint.

Thinking about the carb seals, there could be a source too. Overtightning the seal between carb and manifold is a known source of both vacuum leaks and fuel spilling. Slightly tigthning is sufficient (max 20 ft.lb or slightly pulling a wrench with three ingers).

Further, check all lines, especially the moulded supply and return lines to and from the pump. Located at right hand side of the car, underneath the pump. Pump itself only seldomly leaks.

If the problem is still there after a couple of warm days I would suggest you'd start by inspecting the fuel system from the tank up until the pump. Every leak after the pump should dry up after a couple of days because it simply does not get any new supply of fuel until you start it again. The fuel line from the tank to the pump however is always pressurised by gravity, meaning that it will only stop when the tank is empty.

Go for it and let us know what you found out.

Tom T, I went home last night and there was a smell of gasoline in our family room. I went into the garage (which is off the family room) and the gasoline smell was really strong in there (my 81 Corvette is kept in there).

I'm glad you started this thread ... now I know what to check..

My 81 had the same problem and I never found any leak. One day I was looking through a catalog and found a gas cap that had a trap door so you could put the pump nozzle through without removing the cap. I ordered it and installed it almost a year ago and guess what?? No more gas smell in the garage or when driving. Possibly the old cap no longer sealed???
Dale
S

Now I have 3 things to check:
- gas cap
- make sure fuel is over half full
- check the charcoal cannister

Sarann- make sure to check the fuel pump too! My bet is fuel pump first,vapor can 2nd.

Thanks Dave. Well I can't find anything myself, so taking it to someone else and getting a 2nd opinion (the sad news is that the Corvette is now sitting outside rather than in the garage)
T

SARANN......JUST FOR YOUR INFO, I REMOVED THE CARB AND HAD IT REBUILT. FOUND OUT THAT GAS WAS SPILLING ONTO THE MANIFOLD CAUSING THE ODOR. THE ODOR IS GONE AND THE VETTE WILL SOON BE PARKED BACK INSIDE THE GARAGE.......WHERE IT BELONGS!

Sarann- I hope you get that fixed soon so you can get your car back in the garage!!
S

I mentioned in a previous post that I couldn't find any signs of where the gas fumes were coming from, so was going to take it to someone for a second opinion.

I took it to someone and they can't find anything wrong either (they have checked the charcoal cannister, the fuel pump and fuel lines - all look good). Is there something we're missing?
S

Well my Corvette is back at home now .... but not in the garage.
We found were the gasoline smell was coming from.
It's coming from the gas tank.
In '96 I had the gas tank resealed but it's gone again. I'm not going to get it resealed again, so now am looking for a gas tank.

Sarann- Forget about getting a brand new one,they do not exist.You can call these people they have good used ones......
www.contemporarycorvette.com $350

Thanks for the site. I was hoping that I could find one in Canada then wouldn't have to worry about getting it through customs.

Is there anywhere in Canada?
T

I also had a fuel odor from my '74. Replaced both the fuel return lines and the problem was solved easily (did have to remove the tank to accomplish). They are available from all major vendors (eckler, midamerican, cc, etc.).
You must log in or register to reply here.