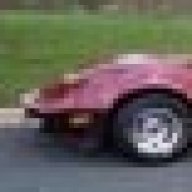 My '81 with a Rochester Quadrajet has had a bit of looseness in the primary throttle shaft
for a few years now. While fixing a choke problem, I noticed a lot of gas seeping down
the shafts on both sides as I rotated the throttle (engine off).

I decided now is the time to fix it before I attempt to go to Bowling Green or have it torch
up like a roman candle beforehand. I made a few calls to area parts houses for the bronze
inserts and kept coming up with one name. Knowing I could buy some bushings for $ 5.00
from one vette supplier. I decided not to press Murphy Law and temp fate. So I took the
base in and 20 minutes later on $60.00 lighter, I have wobble free shafts.

Upon buttoning up the carb and running the car I found I had to lower the idle by 250 rpms
because the carb is not sucking extra air from around the shafts (That's my quess!!!)

Moral of the story........If you see drip marks or a puddle forming under your shafts on the
intake manifold this is the cure.

I will check mine tomorrow!

My '81 had the exact same problem along with the fact that the carb hoggs terribly unless the engine is at 190 degrees. My fix is far more radical than yours.....I am replacing the carb w/a new Edelbrock 750 cfm square bore this week. 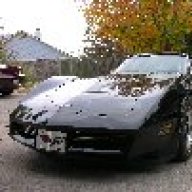 Be sure and let us know how the Edelbrock 750 cfm square bore carburetor works!

They make a kit for q jets cost about 36 bucks.The kit contains a drill bit for the shaft hole new bushings and well plug repair parts and epoxy paste to keep them from leaking. throttle shfts have to be drilled because they are usually out of round
You must log in or register to reply here.
Share:
Facebook Twitter Reddit Pinterest Tumblr WhatsApp Email Share Link