Got a question about polyurethane body mounts

I got the set of mounts from Zip. They are not shaped like the old ones. I have some pics on my site of them. I was wondering if someone could take a look and tell me if I have it oriented correctly. The pic is of the left rear mount. I have the cone shaped part on top with the narrow end down. Only one of the pieces that make a pair is cone shaped. I'm not sure if it goes above or below the metal plate.

Another issue is whether the groove that my screwdriver is pointing at in the first of the two pics is supposed to go into the hole in the body mount plate. There is no way on earth I would ever get that in there so I hope that is NOT how its supposed to work. The directions in the box are pretty weak. Please take a look at the last two pics in the group.

From the pic you have with them mounted it looks like the diagrams I was able to google on the net..

I know that's not really a difinitive answer.. but at least it's a TTT.
T

Now see I got the same mounts, and I did it the the oposite way. I put the "puck" shaped mount between the body and the frame. I'm not sure if I am right. I looked for diagrams online but came up with zilch. I'll be interested to see how this one turns out.

Just a thought, I thought that if I put the cone shaped piece between the body and frame that it would sit to high and look funny.

Here is the image I mentioned..

I found that picture, but it is still not very clear. both look to be flat.

the cone shape always goes between the body and the frame, the puck goes on the other side. The wide side of the cone goes on the body side, the narrow side on the frame.

I e-mailed Energy Suspension about a week ago with a pic and an explanation of the dilemma. They have yet to get back with me. I kinda' think they won't.

TT,
Makes sense that the big end should go against the weakest surface - the fiberglass. I will do it that way.

Tom,
I guessed the way I had suggested above because the original mount piece above the frame in that LR pic on my car was closest in thickness to cone shaped poly piece. It was compressed a bit but the bottom one was way thinner on my car and much closer to the puck's thickness. If you're not having any trouble I'm not sure I'd go to the work of flipping them over, probably just leave it. You would have the original diameter washer against the body I assume so that should spread the load.

If I ever do get a response from Energy Suspension I'll definitely post it here. 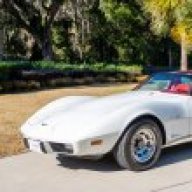 If Energy Suspension DOESN'T respond within a reasonable amount of time, you should let us know that too. That's also useful imformation.
L

Here's the response from Energy Suspension. They did respond within a reasonable amount of time. The response went to a home email account that I rarely check. I must have switched to that account right before e-mailing E.S. and Outlook Express sent from that account. The response was the next day. My mistake. The 4072 mount he is referring to below is the puck shaped one as can be seen below. So this indicates that I have them upside down in the LR pic on my site.

Please note the part numbers on the bushings. The 4072 should go on top,
and the 7019 should go on the bottom. Check the hole in the frame to make
sure that any metal parts from the old bushing are not rusted into place.

Please let me know if you need further assistance.