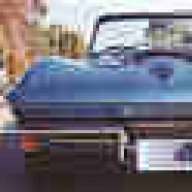 My 86 is hesitating badly, and I can hear a whining noise through the gas filler when I take the cap off. The fuel pump must be in the tank and that must be going bad. am I right? How big of a job would it be to replace?

The pump is located in the tank.

It's not hard to replace; you have to remove the gas filler door and the rubber liner you see inside that area (Just squeeze it and you'll be able to ease it out.), then disconnect the electrical connections.

There are ten or twelve screws located around the perimeter of the filler neck that need to be removed and the pump will lift right out. You'll have to finagle it around some to get it clear of the opening; it's awkward but not too difficult.

There will be instructions included with the new pump on how to R&R the pump; be sure not to forget anything when you reassemble it. Get a new filter (sock) for the pump while you're at it, and also replace the gasket around the filler opening from whence the pump came.

As for whether or not you should have gasoline in the tank, and how much of it is in there, is a subject open for discussion. I've seen instances where people recommend draining the tank (But they didn't mention purging it or anything else! :eek), and I've seen cases where they describe just exactly HOW an empty tank that once contained volatile fuels SHOULD be handled.

One thing to keep in mind is that it is not the (liquid) fuel that is the problem, it's the fuel vapors combined with oxygen that causes the dangerous condition. So, in my opinion, and this is how I changed mine, a full or nearly full tank is better than one that is empty, especially if it has not been properly purged and vented. Just use common sense and don't try to smoke or do any welding/torching in the area while you're changing the pump! :L

Good luck in any further diagnosis of your problem, and also if you do change your pump.

Thankx Ken that sure sounds easier than dropping the tank. Now how do i find out that the pump is bad, just by the noise and the hesitation?

The pump should come on for about two seconds to pressure the system when you first turn the key.

To diagnose a bad pump:

If the test fails and it pressures but doesn't hold:

We already know that your pump is running, so we can skip the steps involved in determining a cause for for "no pressure".

To determine a cause of either too low or too high of a pressure from the pump needs a lot more room and time that I am willing to spend at the moment. However, a few more tips can't hurt:

Save on Brake Kits at RockAuto