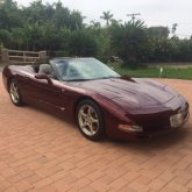 I had to replace my 2003, 50th Anniversary hood insulator.

As strange as it sounds, I found it best to order the part directly from a Chevy dealer. (I know).
I tried a couple of other sources-on-line, but when I tried to pay with my credit card, my bank wouldn't allow the transaction. I called the bank,
and they responded by telling me that, the party that I was dealing with, had previous "issues". AKA not a company that you would want to deal with.
So much so, that the bank blocked them from their database. Lucky for both of us.
The Chevrolet part number for the hood insulator: 10285631. The insulator retainers part number is: 20064875. These retainers are easy to find.
Hope this help the group!

I learned a lot from some great people on this site.

Thanks to the Gang that keeps this up and running. I know it's a lot of work.

I wanted to buy a new insulator several years back but because of the size of the item, the shipping cost were ridiculous!
[SIGPIC][/SIGPIC]

Good point. I was going to order from another company, and the shipping charge was $50.00.
If members are looking to replace the insulator pad, I suggest as I mentioned previously, that you order it from a Chevy dealer and pick it up in person. I had to remove it from the box to fit it in my car. It's very fragile, so you need to be careful. If you have a pickup truck you won't have a problem.

Best regards,
EdB
You must log in or register to reply here.

Help! Can't Find a Hood Insulation Pad For My 2004 Base Corvette