I have a '73 with a 350 and points ignition. I am looking to upgrade the ignition system but I have a mechanical tach on my distributor and I would like to get one of the aftermarket ignitions systems that allows you to keep your distributor. Anybody had experience with the MSD or Jacobs systems on a Vette? Anybody recommend or not recommend one? The ads for these systems say that they will adapt to a points type ignition, will I be able to keep my distributor and tach?

These electronic ignition conversions as well as ones from Pertronix, Mallory, The GM Goodwrench Performance Parts catalog and others fit inside of your distributor and take the place of the points pieces. You still use your basic distributor and tach drive. The Pertronix has been very popular with those who want to retain a stock distributor appearance. All of these brand names will give good service.

Welcome to the forums dogbalou. Tell us more about your '73 When you get time. Got pictures?

I'm not familiar with those systems you mentioned, but I'm running a Pertronix module on my '74, and I'm very happy with it. Check out the following website for more info: 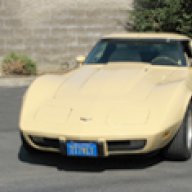 The BEST conversion, is the Jacobs Computer. I put it in my 77 and it was like adding 20 hp. Well worth the $

Satisfaction is the Death of Desire.
77 Vette and 50 Chevy DeLux

magnet vs led vs point trigger

I don't know about Jacobs, but I don't think that MSD currently offers a retro-fit that replaces points in YOUR Delco distributor (MSD does offer hot modules to fit factory HEI). I've heard many good things about the Pertronix points eliminator; most (Pertronix included) of the points eliminators are magnetic (Hall effect) "triggers"... but some (like the Mallory Unilite) use light/LED triggers ... the Unilites have a reputation for DOA failures ... something you can deal with at the track ... but not in a daily driver.

I don't know about the GM points eliminator ... it's probably a magnetic trigger. For a first-time ignition upgrade for MOST folk with a relatively stock-to-mild driver, I'd suggest simply replacing the points with a Pertronix or other magnetic trigger (GM too?) and replace-upgrade your factory canister-style coil with canister-style Pertronix or Accel Superstock or MSD Blaster or Mallory coils ... your GM dealer also offers both a GM-labeled MSD Blaster-upgrade canister-style coil and a GM-labeled MSD box. However, a decent factory point-triggered distributor is VERY, VERY reliable up to about 6K rpm (more if modified) ... and if it does fail ... you can troubleshoot @ roadside ... chevy points & condensor readily available ... most any bubba can R&R points.

I have also seen advertized at Mid America a stock-appearing hot HEI-type distributor that has a mechanical tach drive ... don't know who makes it and it's very pricey.

MOST MSD & Jacobs you hear about are add-ons (called ignition amplifiers) that change your factory "inductive" system to a hotter "capacitive discharge" system. Also, MOST MSD & Jacobs make a "multiple spark" that pulses plugs many times per event; these "spark boxes" usually require a fair amount of wiring and a PROPER place to put the "box" ... C3's are notoriously short of free firewall space. Typically, those boxes' harness carry a very high voltage also; instead of 12 volts at primary side of the coil (as now)... you'll have 400 - 500 volts there (careful with that inside cockpit, it can bite ... permanently!!!). And, it is not uncommon for a box to hum or buzz and produce heat. However, I understand that MSD has recently come out with a "Stacker" system (pn 7000) that virtually eliminates most additional wiring and has somewhat reduced footprint & height... but if you have points now, you'll still have points as a "trigger" with the stacker ... like other MSD boxes, the stacker does not eliminate points. MSD does offer a replacement-upgrade corvette distributor that has a magnet-trigger, mechanical tach drive and both vacuum & mechanical advance (pn 8572 about $290) ... however, it must be used in conjuction with one of their ignition amplifiers (spark boxes). A ton of street & bracket cars use the MSD 6 series CD boxes. Virtually all mid-to-upper NASCAR, SCCA and NHRA classes use a CD ignition ... MSD is by far the favorite and Jacobs is gaining a strong following ... Accel, Crane & Mallory have pretty good CD offerings/following too. Virtually all add-on CD ignitions require a spiral core-type spark plug wire set and probably a coil upgrade from stock too. I have two MSD boxes; a 6TN & 6M-2.
JACK:gap

Here's a link to a Pertronix seller with good prices:
www.carshopinc.com

I installed a Pertronix in my 68 Mustang, been in there for quite a few years I have never had any problems with it, cost about sixty dollars. You don't change any thing just takes the place of your points and condenser.
mytoy
You must log in or register to reply here.

New caretaker/owner of a 1967 Roadster - Have some questions