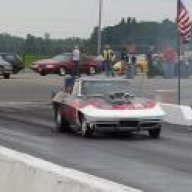 Hello
I went to the national event in Cayuga yesterday./ It had rained in the morning and it also started again by around 7.30 -8 pm, but the in between stuff was very good
It was packed and even though the ground was soaked , spirits where high
I took my camcorder and I also took another camera for some still shots. The 63 was under a red awning giving it a very neat effect( I think)
The last run of the night was between Todd Paton and Chris the Greek in Top Fuel. Chris is 78 yrs old ........you gotta like that
Unfortunately, Paton burn't at the end of the track( think it was Paton) and the emergency trucks had to go out. It then started to pour rain and we had to run , so I hope no one was hurt.
http://s9.photobucket.com/albums/a86/henny496/IHRA%20%20event%20Sept%2006%20Cayuga/
take care
Tom

I raced with Chris in the early 60's - absolutely amazing that he's still driving at 78! Glad he still has his health, and his ethnic bread business has obviously left him in a position to support his hobby!
John
'67 Convertible

Hello
I bought a t-shirt off the Greek when I was in Grand Bend earlier this year. That is when I was told he was 78
He has a smaller trailer with Strange on the side of it, so I imagine they are sponsoring him somewhat. I asked at Cayuga about him racing next year and I was told he decides at the time, if he is going to run another year
I read an article stating that he started to race in 1952
I only wish I have that much ambition and am in that good health when I get older
Driving a 7,000 hp Top Fueler is something to be impressed about, but doing it at 78...........I am in awe of that
I did not know he had a bread business.....I think I will order some of it, it must be good for you
Tom
J

In 2001, he said he'd retire for good as soon as he made a pass in the 4's over 300mph; he did that about two months later. So much for retirement.
John
'67 Convertible
You must log in or register to reply here.