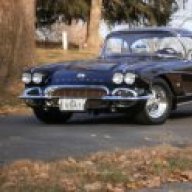 Hi Guys, I just bought a Lionel Corvette Train Set made in 1999. I have never seen or read about this set and happened to just find it on Ebay, by accident. After some deal making, it became mine. I was wondering if anyone out there knows anything about this like, was it a GM promotion in conjunction with Lionel or whatever reason there might have been for them to produce this. Believe me, there doesn't seem to be a lot of information out there on this so, I'd like to hear from anyone, if they can shed some informative light on this subject. Lionel's set number is 6-11984, it consists of a GP-7 locomotive, two red flat cars, each with two corvette cars loaded on them and a porthole caboose. It also came with four small billboards each having the year of the car on them. Thanks for any help.