I'd like to take this opportunity to introduce myself to the readers of this Board, and tell you some things about my involvement with the car and the car itself. I'll try to make a long story as brief as possible. My name is Jim and I've owned the '53 since 1971, buying it from my cousin for $500 as a 1955 Corvette. He had it since 1967 after I found it in the paper for him. He bought it in pieces and in boxes, and the car is still that way. I took the handle of Barn53 as the car has been in either my parents barn or mine all these years. Before that my cousin had it in the alley-way of their corncrib.

I subscribed to the Vintage Corvette Club of America newsletter by Ed Thiebaud, I belonged to the Classic Corvette Club '53-'55, and I am member #33 in NCRS. I believe my SACC number is 1963. I attended the Classic Corvette Club Indy "500" Meet (a couple pictures I took are in the newsletter) Sept. 28-30, 1973. My '53 was featured in the Vol. 4 No. 1 issue of the "Good Times", titled "The '53 that was a '55 for 18 years", The story of E53F001144." In the article is a picture of the car in my folks back yard and a picture of the car taken from an article in the April, 1955 "Hot Rod Magazine" on the SAC Hobby Shops, with the then owner fitting a supercharger on the Henry J engine he had in it. I rode with John Amgwert in his canary yellow '73 Vette to the 1st NCRS Meet in Wapakoneta, OH June 1&2, 1974. I attended their St. Louis Corvette factory tour meet in the fall of that same year I believe. I attended the 2nd Bloomington Corvette Coral and Swap Meet and several after that. Even though I bought a 1966 Big Block coupe in 1978 my interest wained and I stopped attending Corvette events. Later I got involved with tractor collecting and restoration with Minneapolis-Molines and 2-cylinder John Deeres and the old '53 just sat.

I got all my information on the early history of the car from the man in the "Hot Rod Magazine" article. He said Gen. LeMay was a friend of Ed Cole, and got 2 1953 Corvettes out the back door of Chevrolet Division. Both cars had been stripped of their VIN tags by Chevrolet Division. One was a complete running car which was driven out to Offutt AFB around July 4, 1954, but it had 4 damaged corners. They were deliberately damaged so they could learn how best to fix them and write service letters for the dealers. The other car came on a truck and had been an engineering test vehicle, but was missing the complete drive train, suspension, radio and tach, but had a perfect body. LeMay switched bodies and gave the damaged body and spare frame to Lt. Ivins. LeMay had the good one for his daughter, and got a 1954 State of Nebraska builders title for it, Ivins put a Henry J engine in his car, with an overdrive transmission, a regular Chevy front suspension and some kind of Chrysler product rear end and suspension. He got his builders title in 1955 and called the car a "Corvette J".

After hearing this story and hearing that the serial number was supposedly stamped on the top of the frame on the "kickup" John Amgwert came down from Lincoln with a mutual friend one Saturday in April, 1974 and we jacked up the left side of the body and found E53F001144 plain as day. This has been my 1953 Corvette "identity" for all these years, but what is the body number? Where is that other frame with number ??? and with body #144? I know the other LeMay car ended up in Seattle, Wash. in 1960.

I had not heard of this website until I saw it mentioned in the "Vette Vues" article on 1953 #29 and I was immediately hooked. I've known for a long time that I had an earlier body on frame #144, using articles on running changes to try to pin it down and dated parts. I've always thought the car was roughly between #30 and 75. What really got me going again was all the talk about the cloth in #29, well my body has a lot of cloth, too. I think I have the one piece hand laid floor pan, I need some help identifying it. I know I've got a couple parts that are later than parts on #29, but my car is still on the low side of that 30-75 range, I think it is in the 30's.

I think I've rambled on plenty. I'll be asking a lot of questions trying to pin this body number down. 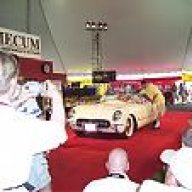 Jim, it's great to see you getting psyched up about the 53 again. Welcome to the CAC. It's a great place and is very open to discussions that other forums may not be.

I look forward to seeing pics of your car when you're able to post them. maybe we can pin down a range of your body build date?

Since you were at the first NCRS meeting, you probably know Joe Chess. I bought my very well documented 1953 #245 from him.

Jim, good luck on your search for more information about your 1953 Corvette.

The more you sweat in peace, the less you bleed in war.
G

I read the complete story in the 1973 Good Times magazine. Fascinating stuff. I am tempted to scan the article and post it here for all to read. But I want to make sure you are okay with that. 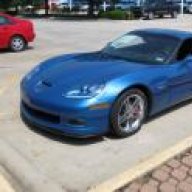 Interesting article Jim. Glad your here....keep us posted on your search as well as outcome. When it's all done show us some pics....love to see pics.... good luck....tim
B

Thanks for the words of encouragement fellas. I think I am fairly typical of some of the other guys who are getting their old cars restored, that they have had many years. There comes a time when either you get at it or send it down the road. I'm 62 and have had the car almost 39 years, it's time to get serious about it.

Brett, I can't say I know Joe Chess, but I sure remember seeing him, seemed to be a really nice fella. I always wondered if he was related to the Chess's of Chess Records.

67vet, this is just a bare- bones outline of the whole story of this car, but I think I wrote enough that people can get the idea of where it's come from.

Russ, you are right about the attachment we get to these things. I know that a good deal of the value of my car is in it's provenance, like the hoity-toity antique collectors talk about, with a long o I'll have you know. My car will never have it's original drive train again but has a certain added value stemming from it's heritage. I don't really mind if you post the article here, but there are some errors in it, mostly regarding the other car, and I don't want people reading something and not knowing what is factual and what is not.
6

Jim,Good story and hope you can get your car finished in the near future. I have had my 61 vette for 40 yrs and just got around to restoring this past year. The article on corvette action under general discussion header My 61 is alive is about my car. I was in the same boat you are in and wanted to finish my car before I was finished. I still have work to do on mine,but I'm driving and kicking myself every day for not getting my 61 done before now. Good Luck with yours. Ace