It is clear from the traffic here that few like the idea of a plate on the front. Since my 05 / C6 didn't come with a bracket I've never installed the plate. The only place for the front plate in states that require them as mine does is under the passenger seat as mine has been for two years now. I've seen nothing that has changed my mind from GM or the aftermarket. The C6 got it's EPA and Safety test specs without a wind dam on the front and to change that would seem to me to violate Federal Law. I doubt that any of the offerings have been tested in a wind-tunnel for 400+ hours. I would park mine before installing anything on the nose of my C6.

Now that I have that off my chest let me move to the other end of my car. The stock exhaust is not worthy of a Corvette and I would like to change it. I enjoy taking long trips in my C6 where I'm at 70+ much of the time. One of the things that I enjoy now is that I can have a conversation in normal tones with someone in the passenger seat so I don't want to change that but stock is just too tame / lame. Sometimes I want to hear my C6 sing like the true hi performance sports car that it is. I would welcome suggestions from others who have already made a change here as I plane on making the change over the winter.
Thanks, DeltaP 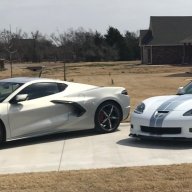 That is the exhaust I plan to install on my C6 when I get the time and money.
I went on a test drive with the Corsa folks at the NCM's Labor Day event and was very pleased. Conversation and listening to music was uneffected yet the exhaust note was much better and very nice outside the car.
Tuna
My Novels:
Crossbow Revenge
Alice Was Not Her Name
Antiques To Die For
HyperDeath
Murder mysteries! 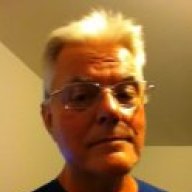 I just had a new exhaust put on 2 weeks ago at my dealer. I wasn't planning on having it installed that day and I just happened to ask the parts manager what he thought of Corsa Touring and he said that he's had several people bring their cars back due to a backfire problem, (even with a X Pipe installed).

He showed me a Chevy approved high performance exhaust in his GM catalog which he said sounds better with no pop-pop sound like Corsa has. Anyway I had it installed and it sounds great, just like a muscle car shood; in 4th gear it's very subdued. It's louder than a Z06 and has 4 chrome tips. Check it out. It was $1030.00 for the exhaust system and $310.00 for the Tip pkg. & $13.20 for misc. hardware, cleaners and chemical waste. Total came to $1581.61.

I also had a Donaldson Black Wing cold air intake installed; that was $497.06 installed.
I haven't had it dynoed yet but I should be getting about 25 more horse from the exhaust and 10-18 from the intake.
For those who have fought for it, freedom has a taste the protected will never know. HM1 1st MAR DIV.

If you like the GM exhaust, shop for the Borla. Same muffler, frequently cheaper.
There are times for thinking, and times for acting, but the art is in the balance