My poor '65 has been suffering from rotting trailing arm bushings for the past year or two and I have been waiting for the right time to take the plunge. It's big $$$ and of course there is the "might as well" factor which expands every project to fit the size of your bank account. So when I added up the parts it was a little daunting. But I've saved my pennies and now is as good a time as any. I've put together a parts list and I'll be ordering some every month to spread out the pain on my credit card. hnoes I'm buying the parts myself but a shop that I like a lot is doing the work as I don't have the time, skills or tools to do it myself.

First, some background on the car: '65 327/300 4-speed convertible, Milano Maroon/Saddle/Saddle top, sidepipes and KOs, original block, original body, and mostly correct where it's not original. A nice driver. Purchased in '94 in Boston and moved out here to CA in '96. The car only gets a couple thousand miles a year max so I haven't had to do much to it other than regular maintenance. I did have the front suspension rebuilt and rear spring replaced (with a standard metal leaf spring) in '96.

Here's what I'm planning on doing:

Rear calipers - These were leaking last summer so I already replaced them along with my master cylinder (Vette Brakes). Had to replace the rotors at the same time as they were below minimum. Did the flex hoses and the shorter metal lines as well.
STATUS: COMPLETE

Crossmember brake line - Purchased this at the time of the brake job but deferred installation.
STATUS: PURCHASED.

Trailing arms & shim kit - I love the idea of buying a complete trailing arm assembly with everything pre-installed, but I already replaced my rotors, so probably better to get a complete wheel bearing assembly w/out rotor, and separate trailing arms. Opinions?
STATUS: NEED TO BUY

Half-shafts and u-joints - Look old, might as well replace.
STATUS: NEED TO BUY

Complete emergency brake kit - Mine has never worked (frozen cables) ever since I bought the car. Looks like if you buy complete trailing arm assemblies this is built in and you don't need to buy it separately
STATUS: NEED TO BUY

Shocks - Old, might as well replace.
STATUS: NEED TO BUY

Strut rods and bushings - Old, might as well replace.
STATUS: NEED TO BUY

Service differential, replace pinion seal - Might as well and it's always been leaky. Nothing terrible just a drip here and there but makes a mess after a while. It's a 3.36 posi unit and original to the car as far as I can tell, based on the date code.
STATUS: NEED TO BUY

Rear spring - The rear spring was replaced in '96 and still looks good, but the rubber donuts are dry and cracking so I'll pick up a new set.
STATUS: NEED TO BUY

Other misc stuff that I'll have replaced at the same time the rear-end work is being done:

Radiator - My aluminum radiator is leaking, time to replace. It has an '82K' date code so I'm guessing that's an accurate code and it's 25 years old. Not bad in a car that only gets 1-2k miles per year! Must have been a factory replacement from back in the days before GM stopped making them. Already purchased a correct, date Dewitts unit to replace it.
STATUS: PURCHASED.


That's it. I'll post updates as stuff comes in and I would love to hear your thoughts on parts, vendors, anything helpful you learned from doing your trailing arms, etc.

Good Luck with it .

I would start soaking things with PB-Blaster now

Trailing arms should have a new shim pack,new trailing arm bolts (old ones might have to be cut out)

Whos trailing arms are you going to get?


New french locks for when they remove the half shafts

not knowing a lot about 1/2 shafts, but why not get them sand blasted and powder coated? Save some money and still get them to look great.
2015 Z06, 2001 convertible 6 speed, 1960 5 speed with 383 stroker EFI Cross Ram, 63 SWC RESTOROD under construction

Doing the same job on my 66 and I am very lucky, tailing arm bolts came out with finger pressure, than god for a desert car. 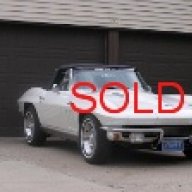 IMO get your ujoints at azone, or some other store that offers lifetime warrantee. Autozone has replace my 6 ujoints 5 times over. Swing axles are hard to wear out, and can be cleaned and painted.

You need to lift the body to install the fuel line. IMO you should replace the brake line that runs along the LH frame rail while the body is up.

Unless the trailing arms are rusted through, they can be cleaned, painted and get new bushings. Spindle bearings are a pita but I've done mine 4 or 5 times.

I bagged my original strut rods and put twist-adjustable rods from VBP on - about 15 years ago. They make camber adjustments sooo easy.
You must log in or register to reply here.