Rebuilding the crossfire & building it up

After 32 years and 74k miles, the oil pump went out. The oil pressure at idle in park and in drive was swinging wildly at random- the relief valve went out.

Between that, the valve seals (leaky seals evident at start up), and a small leak at the front main and rear main... I've elected to pull the motor and rebuild. It didn't make sense at this point with the age of the motor to replace just the oil pump.

I'm targeting around 325hp and 380lbs/ft of torque with the combination of parts for the build. I had put an EBL ECM from RBob in it back in March and had begun familiarizing myself with it and tuning in general.

This is probably the most import thing to share- I'm not looking to drag race the car- but rather to give it a big shot in the arm in terms of grunt and power. That's the purpose of my build and what I plan to do with the car.

Based upon the needs of the engine, the 80lb injectors at 14.5 PSI would be sized appropriately for the expected horsepower (thanks to the EBL Utility!). Given the engine's powerband, I'll have a 5,200 - 5,300rpm shift point.

I am still running the stock air box, OE exhaust manifolds, and v-belt system. I've tried very hard to keep the car as close to stock in appearance under the hood and to maximize the CFI system to its limits. I want a stock looking set up.

And... aside from the fact the Renegade intake looks outwardly a bit different than the factory intake, the rest of the engine looks virtually OE right down to the valve covers.

Good luck on that one Mr Kane.

Supposedly the DCS Manifold is the bomb, unless you know it's there and see the Renegade marking on the top, people dont really know it's something different.. One guy in Germany has a different vendors manifold on it and runs 250km/h with a 82CE, well, thats where i think his foot ran out of ****

One thing to keep in mind (Sure you're adding it to your list already, thought it worth mentioning): Brakes! He who has lots of go, also needs lot of Stop!

If you want to go as close to stock as possible you can still get a lot of low end with your Renegade, more open exhaust and a really upgraded cam and valve train. Talk to Comp Cams. They have been doing your application since back in the day, and can recommend the right grind and kit for your intended use, manifold and induction. They may even recommend further mods. I always found them helpful, and their recommendations spot on.
There are times for thinking, and times for acting, but the art is in the balance 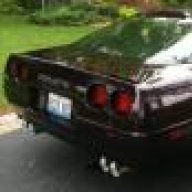 Unless you parallel plumb the TBIs, it will be difficult to use the 80#s. As you know, the Xfire uses staggered size injectors due to the drop in FP between front and rear TBs. GM didn't have a larger set of injectors that could mimic that stagger and flow more fuel. So the fuel supply needs to be equal to both TBs in order for the motor to receive a balanced fuel pressure between left and right banks.
Also, I think you won't have enough flow with 80# at 14.5psi. Pretty sure u will need to implement a VAFPR and use that function in EBL.I ran 20psi for 285rwhp at an 80% duty cycle.
Last edited: May 19, 2014

KANE said:
Dominic- yeah, that's something I'm seriously considering... setting them up to run in parallel.
Click to expand...

I'm afraid you really don't have a choice on that. I tried it with same size injectors and staggering 80/90#s. You don't have this issue w a dual pod TBI like those found in TBI trucks. But because of the individual TBs on the Xfire, it becomes a necessity. Running in parallel then requires an external regulator which is plumbed to vacuum port and varies fuel pressure to accommodate a smaller PW at idle, and greater fuel flow for WOT.

xfirez51 said:
I'm afraid you really don't have a choice on that. I tried it with same size injectors and staggering 80/90#s. ...
Click to expand...

Yeah, that's what I was thinking too.

I was looking at this- Aeromotive 13301. Any thoughts on a piece that isn't as large? I'm really hoping to avoid a large piece that draws attention.

Also... did I ever mention I hate NP fittings, unions, and wedding rings? Personally, I like AN fittings... so I might just swap all the connections up top over to natural finish AN connections. Probably doing that anyway since most of the VAFPR are AN already.
1982 Dark Blue Corvette
Crossfire Injection | .496"/.495" Cam | AFR Eliminator Heads | EBL | 3.73

KANE said:
Yeah, that's what I was thinking too.

I was looking at this- Aeromotive 13301. Any thoughts on a piece that isn't as large? I'm really hoping to avoid a large piece that draws attention.

Also... did I ever mention I hate NP fittings, unions, and wedding rings? Personally, I like AN fittings... so I might just swap all the connections up top over to natural finish AN connections. Probably doing that anyway since most of the VAFPR are AN already.
Click to expand...

That's actually the VAFPR I used. Most people used that one. I had AN fittings. My setup looked a bit like a "bundle of snakes"
because I used all braided lines rather than bending stuff. The bent hard lines make for a cleaner install. I cleaned up the 13301 install after these pics. The aircleaner hid most of this.
At this point, I had not connected the vacuum port or used the variable BPC table in EBL.
Anyway, you get the idea. 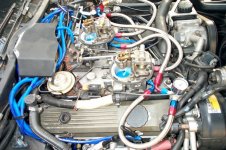 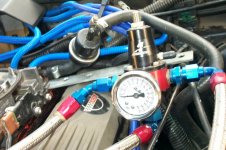