I wanted to show you the job I just finished on my seats. My 94 sport seats were, like nearly everyones, showing wear. Particularly in the drivers seat and back bolster area. I did quite a bit of research and reading before I decided to try this. I can say that it turned out to be a much easier job than I was expecting (so far). I did most of the research on Leatherique.com and bought my products from them as well. The process that they preach works very well. The leather in my 94 was getting kind of hard and "cardboardish". The "Rejuvenator Oil" (two applications) took care of that. They leather is now soft and supple. Then the bolster areas were rubbed, in spots, down to raw leather. Thank goodness they weren't ripped or torn, this would have made the job much more difficult. Below are some before and after pictures. Now mind you, the "prepping process" makes the seats actually look better than they did before the process, but the leather now looks new. Let me know what you think. The seats must now dry/cure for 48 hours, so i will reinstall them in the car sometime this weekend.

The drivers side seat bolster before (the flash, I guess, makes it look better than it really did)

Drivers side seat ( originally had an orange streak through the center, doesn't show up in picture)

The bolster after re-dyeing.

Another shot of the seat back after re-dye.

Looks great, Tom. Nice job. Thanks for sharing and thanks as well for the information regarding Leatherique.com. I'll be sure to check them out. My seats are still in very good condition, but as they say, an ounce of prevention...

Nice job, Tom !!! now get back to work on those cabinets before the wife kills you !!

Ted Krempa said:
Nice job, Tom !!! now get back to work on those cabinets before the wife kills you !!
Click to expand...

Oh Ted, how close you are to the truth. That project has been going on for some time, fortunately not for the wife, but for a local business. I really need to get that completed this weekend.
2007 Atomic Orange Coupe Cashmere/black interior 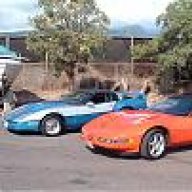 Exelent information ,I will be buying mine this week THANKS!!
redvette

redc4corvette said:
Exelent information ,I will be buying mine this week THANKS!!
Click to expand...

John, are you doing the 94, is your interior red? If so, maybe they will use my formula for the mixing of the color. Otherwise they charge $30 for matching color to a sample. Might save you a few $$$$$$.
2007 Atomic Orange Coupe Cashmere/black interior 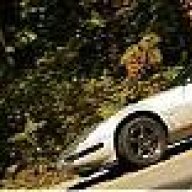 How's the other project coming?

toms94 said:
John, are you doing the 94, is your interior red? If so, maybe they will use my formula for the mixing of the color. Otherwise they charge $30 for matching color to a sample. Might save you a few $$$$$$.
Click to expand...

I have the 94 with tourch red outside and red and black interior inside.
That would be great if you have the code numbers.
How much to give them up
redvette

How's the other project coming?

Gerald, I haven't had a chance to go back and re-adjust yet. Weather hadn't been too cooperative, and now the last couple of days it has, and I have been too busy with other things to get to it. I'll keep you posted.


redc4corvette said:
I have the 94 with tourch red outside and red and black interior inside.
That would be great if you have the code numbers.
How much to give them up
Click to expand...

They didn't give me the code, but if you will just tell them that it is the same as mine, they might fix you up. I'll contact them and let them know. I'll PM you for complete info.
2007 Atomic Orange Coupe Cashmere/black interior 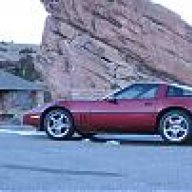 What a difference! Gorgeous!

How long did it take?

Greg, it really didn't take that long. I pulled the seat bottoms out and prepped them (about an hour), and left the backs in the car and prepped them (another hour) one night. The next afternoon I decided to pull the rest of the seat out and take them to my shop to spray the dye (about 30 minutes). The actual time spraying on the dye was about 15 minutes, I left them to dry for about 2 hours and then another 15 minutes to shoot the second coat on. I let them sit over night (actually until I got home from school the next day) and then spent about and hour reassembling them.

Thanks for all the nice comments, I can/will say that this is a job that most anyone can do and get good results. I am going to help my little brother redo the seats and steering wheel in his BMW Z3.
2007 Atomic Orange Coupe Cashmere/black interior

Thanks Tom I ordered the $106.00 kit yesterday.
redvette
B

What's the fomula? I have Red seats. thanks!!! Robert

Robert, I think that if you tell them that yours are the same color as mine they can mix it up. I'll PM you with more info.
2007 Atomic Orange Coupe Cashmere/black interior