SS Caught on a test track outside Detroit

We caught the so-called “Blue Devil” Corvette last week on a General Motors test track outside Detroit, just days before it may be unveiled at the New York auto show. The sound of the supercharged V8 during acceleration is akin to a big diesel decelerating down—sharp rattle raps—only in reverse.

Check out that symbol on the rear: Is it a Duke Blue Devil? GM chairman Rick Wagoner went to Duke, but is officially denying being involved in the naming process (natch). He has, however, spoken in broad swaths about the Corvette model’s racecar derivatives, what with its reported 650 hp.

Whether the mascot sticks or not—we’ve heard whispers about Corvette SS being confirmed as the name, with Z07 and Stingray thrown around as well—it looks like you could see this ’Vette as a 2009 model at around $100,000. —Jim Dunne, Ben Stewart and Matt Sullivan 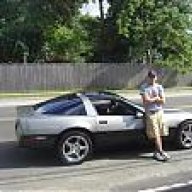 idk if that is the devil logo it almost looks like a race track of some kind...

when is teh ny auto show. i am goin to be home from college easter weekend maybe i can catch it and see this amazing piece of engineereing myself hahah
|O O CORVETTE O O|

Cool, but I'm not sure that's the BD logo either. I can't even squint and get it to look like the logo.

Oh well.. thumbs up regardless!