Sting Rays were icons of style

Sting Rays were icons of style

How the Corvette came to be

Although inspired by such British roadsters as the Jaguar XK120, the first 1953 Chevrolet Corvette was more sporty car than sports car. Power came from a modified version of the Chevy sedan's overhead valve in-line six, and its two-speed automatic transmission was disdained by sports car enthusiasts.

That soon changed. Under the guidance of a Belgian-born, German-educated engineer named Zora Arkus-Duntov, the Corvette evolved into a genuine sports car. Arkus-Duntov joined the General Motors research department in May, 1953. His arrival coincided almost exactly with the production of the first Corvette in June of that year.

Among his early assignments was an analysis of the Corvette's handling, which he concluded was deficient. He set about turning the Corvette into a credible road-holding car, and Arkus-Duntov's dedication eventually earned him the title of chief Corvette engineer -- and the unofficial label the Father of the Corvette.

The remarkable, new 1955 overhead valve Chevy small-block V8 was installed in the Corvette and, by 1957, a genuine four-speed manual, all-synchromesh transmission was available. Optional fuel injection also appeared in 1957, and displacement was raised to 283 cubic inches from 265.

The 1963 Sting Ray was all new except for the engine and transmission. The X-member frame was replaced by a stiffer, wider, ladder-type, and the car's overall dimensions were reduced. The wheelbase was shortened 102 millimetres to 2,490 mm, length reduced 35 mm, width cut 20 mm, and height lowered by 61 mm. It was a trimmer, tauter sports car, although its 1,361-kilogram weight stayed approximately the same.

The most advanced feature of the Sting Ray was its new independent rear suspension. Based on the CERV 1, its double-jointed half-shafts also functioned as the upper control arms. For space reasons, the rear coils were replaced by a lateral multi-leaf spring. This rear suspension was pure engineering elegance, the first modern American use of a fully articulated rear axle.

Corvettes had previously been open cars exclusively, but, for 1963, a fastback coupe was added. The split rear window, which everybody but the stylist, Mitchell, wanted to eliminate, became an instant '63 identifier. Mitchell was eventually overruled and the split window lasted only one year, but his instincts were correct -- the '63 has become the most collectible of Sting Rays.

The Sting Ray's styling was a distinct break from the previous Corvette's rounded shape, and defined by a sharp character line extending all the way around the car at wheel-top level. The headlamps were concealed behind electrically operated doors, the first on an American car since the 1942 DeSoto.

Power came from a 327 cu.-in. V8, a further enlargement of the original 265, with four horsepower ratings -- 250, 300, 340 and 360 hp. Both an automatic transmission (still a two-speed) and three-and four-speed manuals were available, although the automatic was confined to the lower-powered engines.

Performance, particularly with the high-output engines, was prodigious. Road & Track (10/'62) reported a zero-to-96-kilometres-an-hour time of 5.9 seconds and a top speed of 229 km/h with the 360-hp, four-speed version.

Although the Sting Ray remained substantially unchanged over its five-year history, it received many subtle styling alterations and mechanical options. For 1964, the rear window divider disappeared, as did the two phony air intakes atop the hood. With the 1965 models, the fake front fender vents became functional.

Although the 327 cu.-in. V8 continued to be available right through the Sting Ray's life, a big-block, 396 cu.-in., 425-hp engine appeared in 1965. Four-wheel disc brakes also arrived that year, and it would be the last year for the optional mechanical fuel injection. When FI returned to the Corvette in 1982 it would be electronic.

The 1963-'67 Sting Ray was a major departure from the first-generation 1953-'62 Corvettes, and to many enthusiasts it was the high water mark in Corvette's history. It's a desirable collectible, particularly the 1963 split-window coupe. Although the Stingray name (as one word) would return in the restyled Corvette after a hiatus of one year, to many the only "real" Sting Rays were those 1963-'67 models.

Sting Rays were icons of style... 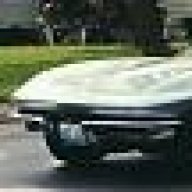 The only Sting Rays were the 1963 through 1967 years, after that they were Stingrays!!!


Paul, if that's what you'd like, I'd bet a dollar to a doughnut you could trade your '67 for one straight up. I personally think your '67 is the more valuable car, you could always feel out the prospects on the C-3 forum, check prices at some of the Vette dealers. I'd sure hate to see you depart the C-2 ranks, though!!

There's one thing I think you guys are forgetting though. Passion.

Put aside the whole value issue. Of course a '67 big block is going to be more valuable than most sharks - depending on mileage and condition, but it really boils down to passion.

The Corvette design has always been about passion and certain generations pull at the heartstrings of us enthusiasts more than others. A '67 may be more attractive than a '68 to you, but to me, the shape and design of a '69 big block with side exhaust just yanks at me.

Again, they were all designed with passion and it's that passion that trickles down to the enthusiasts.

Passion?? I would love to own this car if it still exists.