When I bought the Vette the seller told me about a small leak in the transmission and that it may be the pan gasket. That's fine with me this gal is 21 years old after all. When I brought it home I jacked up the front end to replace plugs and plug wires (what a PITA), I left it jacked up for two weeks (it took me that long to replace the wires, I do have a life too), I noticed that a lot of tranny fluid pooled on the floor (actually on the big piece of cardboard). I figured that the car being jacked up caused it flow out of the pan. So, I cleaned everything up and replaced the pan gasket, with a FelPro. The manual says the pan holds about 1.5 quarts and I poured about that much. The dipstick was dry. I poured in a pint at a time and checked the level each time, seven quarts later it finally registered. I was real nervous about putting that much fluid in, I guessed that the converter must have drained some. Initially none of the gears kicked in until about 5 quarts. I drove it around and it shifted fine. About two weeks later sitting level I noticed more tranny fluid on the ground, two straight streams come after the pan and pooling behind the tires. I know I’ll have to take it to a shop, but before I do. Does anyone have an idea where this leak may be coming from, is there an overflow valve? The level is low now. At least if I have an idea of where this leak may be coming from I can determine if the Tranny guy is BS’ing me.

I'll run this question by Mike (stingray6974) a little later. Everyone went out the Museum for the SharkFest Evolution Show. Tranny oil can come from the modulator unit if the tranny is over filled, this usually happens during braking or heavy acceleration, and is evidenced by the BLUE smoke coming from under the car at the time.

Another thought is ... How did the pan gasget surface look? if it is not flat and straight, eventually this is a source of leaks.

Like I mentioned earlier, I'll run this question by Mike as soon as I hook up with him out at the museum.
"Quality, not quantity"​ 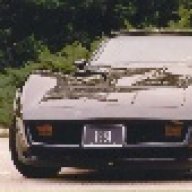 Doug, are you seeing streams of trans fluid? If you are, check the cooling lines, I had one spring a leak and you wouldn't believe the amount of fluid that can come from them in a short period of time. Mine has several leaks, the front seal, the rear seal, the speedo cable and the shift shaft all leak a little. I know I need to rebuild the whole thing but other than the leaks it acts pretty good so I just make sure it's full and keep cruisin.

When I replaced the gasket I check the tranny and pan lip and found nothing too obvious. I cleaned them real well. I put the gasket on with the bolts through the pan to secure the gasket; I also put in a new filter. I didn't have any leaks for at least a week. The leak appears to come above the pan; there are two bolts, which I assume is part of the mounting assembly for the tranny. The oil is coming from there somewhere, thus creating a twin trail of oil from that point and towards the rear. I really appreciate the help that’s one of the things that makes this a great site.

Doug, I know what you're talking about with the 2 bolts at the rear of the pan. Just above that is the tail shaft, you're probably leaking from that seal. I've heard that's not to bad to replace but I haven't done it so I won't comment on it to much.

Thanks to everyone for their input. I got the car up and closely inspected every nook and cranny. It looks like the rear seal, which I can do myself (pulling the shaft) I also find out I needed to replace my U-joints too. Might as well do that at the same time. Again thanks for the help, this is a great sight.

When you pull the tail cone to replace the seal consider replacing the bronze bushing at the same time. The bushing is under $10 at NAPA and your already 3/4 into it to change the seal.
Dale
D

Thanks, will do. BTW, is it called a bushing or something else? I like the guys at the parts store to THINK I know what I'm talking about. Also should I upgrade my u-joints or just order stock. The motor I plan on installing won't be more than 400hp.

Doug,
Tail shaft bushing is what it is called. NAPA parts # 1-3932. This is for a 1981 TH-350 transmission. BTW if you buy the re-greasable Rhino u-joints with the grease fitting in the end cap, they will hold 400+ horsepower with no problem what so ever.
Dale
You must log in or register to reply here.