weird, shuts off and restarts. really need help with this.

So I have a 1994 non zr1 it has no performance parts and is all stock. My problem is that I have had a rough low idle for a year or so now, runs about 500 or so rpms at idle in gear, you can see the dash lights dim back and forth with the idle and can feel the car shake a little like a lifted cam. I have replaced plugs, wires, distributor, map sensor, egr valve. I had it at the dealer for three days, they did an induction cleaning on it, and a compression test, and then gave up. Now the big problem. I don't drive the car to much long distance, but in September I had to drive about a 6 or so hour trip, that's one way. Car did great going down, but when I was leaving the hotel to go home the car shut off in the parking lot, just like I turned the key, no stumble, or sputter. But it started right back up, and I headed down the highway. About 5 miles from the hotel, while doing about 75 mph on the highway it shut off again, same way, no warning, I left it in gear (drive, it's an automatic) and I shot across three lanes to get to the shoulder, before I get there the car springs back to life on its own and takes off down the road like nothing happened. Everyone I tell this to has never heard of a car doing that. It did this two more times, with about 5 to 10 miles between. So I stopped and filled up the tank which was about half a tank, thinking I got some bad gas. After that no more problems the rest of the trip which was still at least 4 hours. About a month or so later this has returned, it randomly shuts off like you turned the key, if the car is moving it will restart on its own, but sometimes it will do it like sitting in bumper to bumper traffic, or when you go to pull out of a parking spot. When it shuts off, the rpm gauge goes to zero, but everything else is normal just like if you get in and turn the key, other gauges still read normal, but the battery light comes on, weirdly enough the engine light does not, the radio stays on, and lights stay on. And it Has never given a code. I really need some help, cause I drive this car pretty much everyday.
D

i understand the car is all stock, do you think maybe the previous owner had an aftermarket remoter starter installed possibly causing the problem. the only time i have ever seen a car start without turning the key is with a remote starter. unless your car is nicknamed Christine.. then you have deeper issues to contend with.
B

I have not seen any evidence of an aftermarket remote start. And also when I say it restarts on its own, I mean just refires the starter does not start it, there is no noise from the starter at all. It's like it either losses spark, or fuel but the computer does not know the car is dead so when the fuel or spark returns it just starts running again. And I do know that the engine is dead, because I lose power steering and power brakes, and charging system.

I have seen this scenario before, and it could be the electrical part of your ignition switch going bad. With the key in the "ignition on" position (not accessories) and preferably with the car running in park, wiggle the key back and forth and see how much rotating of the switch is needed to stop the engine or "ignition on" (not accessories) components. You should be able to turn the key a fair amount either way before the components shut off, if only a small rotation of the key is needed to shut down the vehicle then the electrical portion of the ignition switch is bad/going bad. Good luck with it.
Master Technician

I tested the key ignition like you were talking about, and it seems to take about the normal amount of movement before it shuts off. The whole ignition switch does seem to move around in the column more than it should, but does not seem to cause any problems. I've had people suggest that it could be the coil or ignition control module, what do you guys think? Also I've heard that the cheap opti-spark's sometimes go bad after about two years, which is about how long ago I replaced mine. also heard that it could be a relay getting to hot and clicking off. 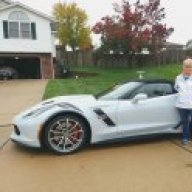 It does sound like it may be either the ignition control module that is mounted with the coil on the front of your left head or it may be the opticrap again.
B

So I was doing some looking on the internet and I think I may have found the problem. I found a site that listed what the fuel psi is supposed to be with or without the regulator hooked up. It said that my car is supposed to be 40 to 42 psi with regulator, and of course it's higher without the regulator. After reading this I remembered that about three years ago on a slow day at the shop where I worked, me and a friend tested the fuel psi because we were trying to find this low rough idle problem. I remember him saying he tested it and it was around 30 psi, and he said that it was good, so me not knowing better at the time just went with it. It seems weird because I've never heard of a fuel pump being half bad for three years, I'm going to see if I can test it again to make sure my memory is right on this.

Normally when the in tank fuel pump goes, it goes. Sometimes you will get a few times that it will stop and then work again right before failure but I have never heard of that happening for three years.
B

I've never heard of it either, but I'm wondering about the psi being low this long could cause the rough idle and the hard acceleration stumble. The car has only started shutting off in the past three months, which is still much longer than it normally takes for a fuel pump to go bad. Is it possible that there is something else causing the low psi, maybe the fuel pick-up is clogged? The inline filter was replaced about a year ago.
B

So I tested the fuel psi, and it came up right at 40. So pressure does not seem to be the problem. But the car shut off on me again yesterday going home, and when I was trying to get it to restart, sometimes I could not hear the fuel pump run and sometimes it would just run for half a second. So I think it's still some kind of wiring, or pump problem. Also I had my scanner on the car and I noticed that the evap and egr duty percentage both stayed at 0 no matter if it was idling or if I eased on the gas or spiked it or floored it, anyone have an idea about this?

Wow....you mentioned the car dying and then running again on it's own. I just battled my truck problem which took me months to diagnose. It did the same thing, no codes, graphs with autotap were all normal then, bang, it would shut down then, it would just start going again. All the graphs came up normal again. It turned out to be the PCM connections, the plugs and pins looked normal but there was a bad connection found by moving the plugs slightly whilst the truck was running, I could actually make it stall. Easy thing to check anyway, doesn't cost anything. Your last post about the EGR led me to believe your computer is losing some of it's connections. Might be a good time to check the grounds on frame rails as well. Hope you find it!
B

Well I know this goes against the religion of any good mechanic, but I was getting tired of trying figure all this out, so I replaced the distributor with an msd, replaced ignition module, coil, egr solenoid, and water pump, (which is good because half of the ball bearings were gone) and I also replaced the whole fuel pump sending unit, fuel injectors, and fuel filter. So yes I threw parts at it. But it has not shut off, and the idle problem has gotten better. The fuel filter had come apart and was blocking part of the outlet side. The only problem is that I got 26lb injectors and not 24, and I don't have a laptop or the software to reprogram the ecm. Does anyone think that it will cause a problem, or is it a small enough difference that the ecm will be able to compensate. Also which way does the maf sensor go, is the plug suppose to be at the bottom or on the passenger side?
You must log in or register to reply here.