Looking at your picture #2 I think I see a faint outline around the hole underneath the two cables. When you look at the picture I posted you will see that the cable that goes through that hole has a large piece that the cable goes through. Looking really close at that piece you can see the button that locks the cable when it is adjusted. It is just a guess but I think the cable must have broken under stress and when it did the pieces went flying. I would think there should be some cable
dangling from the transmission. The two cables you have are the throttle and the cruise cables. I think you have another case of the people you are taking the car to have blinders on. Like so many people they jump right to the most expensive solution (and profitable)and because they have done the job hundreds of times they trap themselves into not thinking of other possibilities. As for what damage to your transmission this might have caused you won't know that until you get this problem fixed. If it were my car I would park it for now to keep from doing any damage. I am not an automatic transmission expert but I would think if it is not up shifting then the pump must be building up an awful lot of pressure with no way to relieve it.

Remember what I have pointed out is from very limited resources. I could be wrong about that cable and would hope that someone with a FSM would chime into this discussion.
A


John Robinson said:
Looking at your picture #2 I think I see a faint outline around the hole underneath the two cables. When you look at the picture I posted you will see that the cable that goes through that hole has a large piece that the cable goes through. Looking really close at that piece you can see the button that locks the cable when it is adjusted. It is just a guess but I think the cable must have broken under stress and when it did the pieces went flying. I would think there should be some cable
dangling from the transmission.
Click to expand...

The car has been parked for 2 weeks, with only a trip around the block just to keep everything running. I don't get the car up over 30mph. It's been parked because of the Trans problem and also the gas tank problem. (New gas tank has arrived).

I do see the "hole" under the present 2 cables, where the TV cable should go. I checked the price and the cable is $20 at the local AdvanceAuto parts store. So what I'll have done is have my mechanic install the cable and see if that corrects anything. We'll proceed from there.

thanks for you help on this. It's obvious now that this is the problem.

See if you can get under the car and locate the old cable or where it enters the trans control body. Maybe its been dragging the ground....maybe its a replacement trans that someone installed minus the cable.

These "one size fits all" trans shops, tune up stores and so forth are so generic in their knowledge that its hard to call them techs or mechanics. I admit that they have to look at hundreds of different types of cars and trans everyday, BUT a chev 700r4 is a common trans and they all have a TV cable actuated by the throttle body in the 80s. Later yrs went to more sophisticated control systems, but they should know that as well. Thing is, the younger the tech or service guy the lower the odds that he'll be familiar with the 700 vs the more recent versions of whats basically the same trans. Another thing is that MANY of these shops do not actually do the rebuilds themselves...they swap out trans for a rebuilt unit that comes from a warehouse operation that does nothing but wholesale rebuilding with generic parts and a 700r4 from a chev impala can end up in your chev corvette because the trans is the same but the guts in the hyd system are different. Auto Trans are WitchCraft to most folks...myself included although I'm a retired hyd engineer...

That TV cable is a basic. If they can;t spot that, then that tells me that they are not looking too close at your problem and just offering some "lip service" to get your car in the door....
My advice......RUN.

Spotting this missing cable is great news, but there is also bad news attached. When the TV cable is slack and under-adjusted, it allows the trans upshifts to be soft and mushy causing accellerated wear on certain parts. Its better for the trans to grab its gear so there is no friction wear as clutches slip and slide against each other because the pressure is not there to hold the gear. Its like a spinning wheel.....grab it hard enough and it stops. But if you just lay your hand on it as it turns it hurts and you feel the heat from friction as it continues to turn. Do this enough and you get a blister from missing flesh. Works the same way in a auto-trans. If yours has been allowed to slip with low pressure upshifts for a long time, there could be clutch issues from the high wear. Something to listen for when the shop details whats wrong besides the obvious cable problem.
I test this wheel analogy daily with a keyless chuck on my big drill that has the grips worn off....(why God invented gloves) (and pliars) :eyerole

Find someone thats got SOME Corvette experience, contact the local vette club and ask them who does good work at decent rates. Actually, a high shop rate ends up being cheaper in the long run when the work is performed correctly and they fix the problem the first time instead of making YOU pay for their experiments with parts that are not needed.
Call the clubs. They'll be glad to help you and you'll find some new friends as well. People you can count on....people in the same boat you;re in. 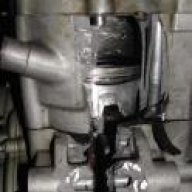 I makes me wounder if there No TV cable.

There most likly be some type of funky rear transmission mounting bracket to make it work.

Remember after the TV cable is put on there is a very precise procedure to properly adjust the cable tension. 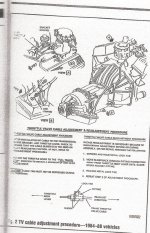 Any update on your problem?
A

John Robinson said:
Any update on your problem?
Click to expand...

John - BoomDriver - Marv02 - thanks for all of your excellent suggestions and information.

My friend Paul (who used to manage AAMCO in Toms River, NJ) came and picked up the Vette Thursday night 12/15/2011 with his flatbed. He called me Friday and said the following:

ABOUT THE TRANSMISSION:
1. He found the TV cable "sandwiched between the backend of the firewall and the trans.
2. He's dropped the 700r4 transmission and given it to a transmission rebuilder shop.
3. He states they've opened it up and 3 gear is shot, various gears/parts are worn out.
4. He states that the transmission looks to be an '86" (this car is an 85).
5. He states "the previous rebuild back in 1999 didn't replace the torque converter but it did have a shift kit installed).
6. He states the transmission will be finished today (Monday) and will cost $1400 with a 6-month warranty. I could have paid $1200 for a "patch job".
​
ABOUT THE GAS TANK
1. He states my original gas tank has a liner (all the research I've done on replacing this tank never mentioned anything about a liner???)
2. He would rather hand clean the original tank than swap in the new tank
3. He stated to remove/replace gas tank will involve removing and possibly breaking old rusted bolts, etc. etc.
4. I could hold onto the new tank or resell on eBAY.
(I held off the transmission job for 2 weeks while waiting for this new gas tank to arrive, hoping to get both things done at the same time)
​
Will be meeting and paying for this today; giving up $1500 the week before Christmas has always been a downside of owning this Corvette. I have owned it since 1988 (commuted in it daily till 1999; it sat dormant from '99 to 2011). My wife is quick to remind me of the friendly relationship this car has had with flatbeds.

When I get the car back today/tomorrow I suspect it will feel strong and have snappy shifts. I have gotten other cars back (1999 Cougar and 1995 Windstar) from Trans shops and the shifting felt "mushy"

Ok, So I picked up my "Vette last week:

ABOUT THE GAS TANK:
I want to thank those that helped me with suggestions, information and knowledge along the path.

ABOUT THE TRANSMISSION:ABOUT THE GAS TANK:I want to thank those that helped me with suggestions, information and knowledge along the path.

Are the up shifts harsh or too high? The adjustment of the TV cable is very fussy and if it is a little too tight the up shifts will be delayed and harsh. Don't forget the cable is new and may require a couple of adjustments until it gets stretched.
You must log in or register to reply here.