Comments on a Be-Cool Radiator.

Well a few notes for you guys out there who want to run this setup.

That says that its displacing a lot of heat.
BBBUUUTTT......

Its suppose to be able to cool 600c.i. and up to 1000hp. Techinically this setup should be OVERKILL BIG TIME but something is not right with my engine, I think.

I just got it rebuild and haven't changed the oil and have put 1000mi on it. Its time to change the oil, I hope this helps. Going synthetic.

The oil pressure is reading 40psi at 2500 rpm but is suppose to be a high volume oil pump. My dads van runs at 40psi at idle and 60 at cruising speed (70mph). Whats it suppose to be? I am thinking the its hot cause of the oil is not providing enough lubrication.

There is a gap in the spal fans between the radiator and the shroud at the top and bottom of the fan shroud. I put weather stripping to seal up the fans agains the radiator so that the air would get sucked through the radiator not around.

Another thing, I think the electric fans are killing my alternator. The headlights look dimmer as well as the interior lights and the car was harder to start after I ran it. I had the fans hooked up to the battery as per the wiring diagram of the relay but only got 10.7 volts across the fans. They need 12V. So I hooked it up directly to the positive of the alternator and I am getting 12.3 V across the fans now and what a difference in the pulling of the fans!

I am thinking I need a better alternator! 140 Amp. Its an investment since I will be using more electronics in the future. 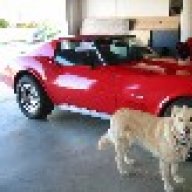 Frank,
First, oil pressure sounds normal. (I assume a high volumn pump doesn't necessarily mean more pressure) I asked the same question last month and the responses were positive. I run 45psi at cruise and 20-30 at idle.
second, check to see if all the seals are in place around the radiator. They designed it to get air. also check that the air dam is in place and that there is no blockage under the front bumper.
third, don't know enough about the altenator. It'll give me something to ask my buddy who's been helping me out. My opinion, I thought electric fans were an on demand, hence the relay. Is the relay bad? I think that wireing them staight in is not allowing your charging system to work properly. Any way some light reading tonight, Corvette electrical.

Have you replaced the temp gauge sending unit? If the sending unit is left in the head when the engine is hot-tanked, it will ruin it and it will read much hotter than it really is.

I battled high running temps after I got my engine rebuilt for at least 1500 miles, partly due to a faulty sending unit giving me false info. Plus, a recently rebuilt engine will usually run a little hot. Right now, I have a 160 degree high-flow thermostat and the stock radiator. It runs up to a little over 210 in 95 degree weather. I plan on tackling the cooling system soon. If I could get it to stay at 180-190, I would be happy. In the winter, it will run at about 170 with that thermostat in it.

I too am running a massive radiator and the Spal twin fans. I also put weatherstips around the edges to seal it to the radiator so it would not back suck engine air through the blades.

First of all, I had a problem, still don't know why, but my left fan shorted and dropped out on me. I was running 221 with the big block in heavy traffic on a nearly 100 degree day yesterday on only one fan.

I changed the fuse, brought the second fan on line, and an now well under 200 degrees.

The other problem is the vette constricts the air flow to the radiator something terrible. So, a 1,000 hp engine in a C3 body will never cool without massive mods to the front lower body and grilles to bring more air in. Plus, the radiator sits at an angle that is not efficient for the flow of air to come up into the car and through the blades.


So, you are on the right track. Make sure both fans are running, don't just assume. Then, make sure you used good heavy grade wires straight from the battery terminal on the starter, or battery to the fan relay junction and good solid grounds.

I have a 120 amp alternator and it is kicking plenty o juice to both the fans, a/c unit, wipers, lights, amp, stereo, electric pump, computer, etc. I see no reason to go to 140 unless you just want to. You need at least 100 amp or so to get in the right target zone.
S

I am glad to see I am not the only one with some of these problems.

Finally my vette is running cooler at idle than ever before. It used to run at 220 at idle which did not make me to comfortable knowing it was still going to get hotter. This was mid to late spring. Now she is actually running at 180 at idle and about 190-200 during crusing speed. I have yet to run her during the middle of the day but I have to take care of a few issues before i do.

As for the alternator I am going to use a lot of electrical components later i.e. fuel injection, gauges, sound system etc. I just want to make sure I have enough. "its better to have more than not enough". It should be able to handle anthing I throw at it.

I have to put my vette away for another while because what she really needs is a body off resto and I don't have the money to do it right now. There are so many little things that are wrong thats its not even funny anymore. The easiest solution is to rebuild her from the ground up again with a few custom modifications to set her apart from the rest.

This cooling deal was one of the last things I really needed to take care of. O.K. enough rambling

What wiring harness did you use? Was it vette specific or universal harness.

How easy is it to tune that edelbrock system? Don't mind paying for the laptop and all but I guess I am curious as to which would provide better control of the fuel managment as I would like to add turbos later to.

I used a Painless 18 circuit G.M. style universal harness. It plugged straight into the steering column/ignition. I had to wire the other ends as I pleased. Of course I ran custom gauges, etc., but could have hardwired it right into factory pig tails as needed. I used the stock rear connectors for the lights, and same on the front.

In my case it allowed me to go from glass tube fuses to nice modern push in style.

Fuel injection.....pretty easy to dial in. It is nice to have a dedicated unit to not only view the data, but make changes in a flash. Speaking of temperature, it also has a read out for water temp. I was able to compare that to my dash gauge as well as a duplicate RPM reading etc. It gives you everything you need in one nice neat package.

The EFI tech guys are great to work with at Edelbrock as well.
S

From what I remember when you posted the pic on that EFI system it looked like you could only display a single line of text. Did I miss something?

Did you consider using a aftermarket wiring harness just for your year? Why/Why not? I am just curious. I am debating wether to just purchase the aftermarket one for my 79 than a general one.

One of the first things I am going to have to do is all the elecrical stuff on my car but the electronics definitely changed and there was more of it on my 79 than 69. I don't know how I am going to keep all the original electrical functions such as buzzers, light delays (when you open/close the door), low fuel light and all that other stuff.

I guess its just one of those things that you figure out as you go along.

As for my vette I might just go with the edelbrock EFI system. I think I will be happy with about 450-475hp. What I want to make a beast is that first gen camaro!

It actually shows two or three lines of text with as many as six or so functions at one time. You don't have to toggle through the screens much to see what you want to see.

Considering the cost of the generic harness, and the fact I intended on running several non stock systems on the car, the generic was the way to go for me. The Edelbrock system comes with a complete harness. All you have to do is hook power, ground, ignition, then find places to mount the fuel pump relay, fuse panel, computer, and punch a hole through the firewall for the bulkhead and wires to poke through.