DETROIT (Jan. 20, 2020) – For more than 20 years, Corvette Racing has
carved a legacy in GT endurance racing with three generations of
front-engine racing Corvettes. The start of the 2020 IMSA WeatherTech
SportsCar Championship also marks the beginning of the mid-engine Corvette
era.


As the 1999 Rolex 24 At Daytona marked the first appearance for Corvette
Racing, so does this year’s running mark the debut of the Chevrolet Corvette
C8.R. It is the first mid-engine, production-based Corvette in Chevrolet
Racing history and will be a focal point this weekend for thousands at
Daytona International Speedway and millions watching on NBC in the United
States and around the world.


The C8.R turned its first laps in public earlier this month at the three-day
Roar Before the 24. Corvette Racing’s six drivers combined to turn 341 laps
for a total of 1,213.96 mainly trouble-free miles.


As was the case at the Roar, No. 3 Mobil 1/SiriusXM Corvette C8.R will have
full-season teammates Antonio Garcia and Jordan Taylor driving with Corvette
newcomer Nicky Catsburg. Meanwhile, Oliver Gavin and Tommy Milner – ahead of
their ninth consecutive season together – will share the No. 4 Mobil
1/SiriusXM Corvette with Marcel Fässler.


Milner was the fastest Corvette Racing driver at the Roar in the GT Le Mans
(GTLM) qualifying session for pit and garage assignments – a 1:42.793
(124.671 mph) lap that put him third in class. Both Corvettes were within
0.446 seconds of the class-leading Porsche.


Corvette Racing is a three-time winner of the Rolex 24 – in 2001 with the
Corvette C5-R and back-to-back in 2015 and 2016 with the Corvette C7.R. The
Corvette C8.R is the fifth racing version that Corvette Racing has fielded
since its first season in 1999. The team’s record since its debut is
unmatched – 107 victories, 13 IMSA Team Championships, and 12 Manufacturer
and Driver titles.


The Corvette C8.R is based on the strong foundation of the 2020 Corvette
Stingray with both developed simultaneously. There is a deeper level of
technology transfer between the race car and production Corvette than ever
before, which helps contribute to many of its advancements. As a result, the
C8.R shares the highest percentage of parts between the production and race
car than any previous generation.


Initial design and development on the Corvette C8.R – with Corvette Racing
engineers working alongside Corvette production personnel – began more than
five years ago with track testing starting within the last 18 months. Heavy
emphasis on wind tunnel and simulation aided in the testing program.


Opportunities Abound for Chevrolet Fans at Daytona
Chevrolet aficionados will have no shortage of things to see and do at the
Rolex 24. That’s because three locations around Daytona International
Speedway – the Chevrolet Experience Center, the Chevrolet Injector and
Chevrolet Motorsports Display – will be full of Chevrolet vehicles that
spectators can learn more about throughout the weekend.


Among the highlights at the Chevrolet Motorsports Display is the 2020 North
American Car of the Year – the 2020 Corvette Stingray and production
counterpart of the Corvette C8.R. Numerous other Chevrolet vehicles will be
on-site including:


• Production vehicles such as the Blazer, Tahoe, Traverse, Equinox, Trax,
Silverado, Colorado, Camaro and Malibu
• Samples of Chevrolet engines, performance parts and accessories available
to fans for purchase from their local Chevrolet dealer
• A variety of Chevrolet and racing related activities for adults and kids
• Corvette Racing t-shirts for fans who sign up with Chevrolet Motorsports


Also located inside the track and next to Victory Lane, the Chevrolet
Experience Center will have a number of additional Chevrolet production
vehicles and product specialists throughout the Rolex 24 weekend. Fans can
walk through the Experience Center and see a Corvette C8.R showcar and
multiple examples of the 2020 Corvette Stingray – both coupe and
convertible.


At the Chevrolet Injector, nearly 30 different Chevrolet vehicles –
including Blazer, Bolt, Malibu, Colorado, Tahoe, Traverse, Trax, Equinox,
Silverado, Camaro and Suburban Corvette Z06, Camaro ZL1 1LE and a number of
Silverado, Traverse and Colorado editions – will be on display throughout
the four levels of fan access. As at the Chevrolet Motorsports Display and
Chevrolet Experience, Chevrolet product specialists will be on-hand to
answer questions on each model of Chevrolet vehicle throughout the weekend.


The Rolex 24 At Daytona is set for Jan. 23-26 with live television coverage
on NBC, NBC Sports Network, NBCSports.com and the NBC Sports App. IMSA Radio
will broadcast all practice and qualifying sessions as well as the race on
IMSA.com , which also will host live timing and scoring.


ANTONIO GARCIA, NO. 3 MOBIL 1/SiriusXM CHEVROLET CORVETTE C8.R: “So far,
the new Corvette has been quite decent in testing. It is still very early
stages for this car. Even though we think we are ready, there are things
that can come up. We must do everything we can to make sure we are as
prepared as possible. Then we can see what we really have. Our testing has
been a consistent evolution between track days and simulator work. We’ve
been able to develop a plan to develop the car even though we weren’t
testing on the track. The correlation of data has been good. Everything that
we have tested virtually is working in real life. That makes life a lot
easier when you can use all your tools to improve. We continue to validate
all the work we’ve done and what we find on the racetrack. We are on the
right track.”


JORDAN TAYLOR, NO. 3 MOBIL 1/SiriusXM CHEVROLET CORVETTE C8.R: “I’m excited
for this race and to do it in GT racing. It’s where I grew up and started my
career. I’m excited to go back into GT racing with Corvette in GTLM with
all-manufacturer teams and all-professional drivers. The class will get a
lot of eyes on it with the first race for the C8.R. The race itself will be
extremely difficult. I’ll have to get used to looking in my mirrors again.
In testing, I was reminding myself to check the mirrors leaving certain
corners so I could get in the habit of doing it for the race. So I’m looking
forward to it. Overall wins are fantastic, but a win is a win; you still get
a Rolex watch no matter what class you’re in! But for us in GTLM, the
competition will be the same if not more difficult than in prototypes.”


NICKY CATSBURG, NO. 3 MOBIL 1/SiriusXM CHEVROLET CORVETTE C8.R: "This is
definitely one of the special races, and I always want to race at Daytona.
Last year I missed it, which was difficult! I was at home and jealous! The
track has a unique feel with the banking and the crowds. American fans are
always something that I always look forward to. The interaction and
engagement is great, and it's something I really like. The Rolex for sure is
the best way to start the season."


OLIVER GAVIN, NO. 4 MOBIL 1/SiriusXM CHEVROLET CORVETTE C8.R: “The C8.R is
a brand new car and this is its first race outing. We won’t know where we
are in respect to the competition, and they will be looking at us and
figuring out where we’re strong and where we’re weak. You can pick up little
bits and pieces during the Roar and even in the two or three practice
sessions before the Rolex 24, but you never really get a great idea of where
you’re at until you get five hours or so into the race. But it always come
down to the last two hours. It would be quite remarkable if we could come
right out of the box and be super-fast, super-reliable and have a successful
weekend the first time out.”


TOMMY MILNER, NO. 4 MOBIL 1/SiriusXM CHEVROLET CORVETTE C8.R: “For sure the
Corvette C8.R is very good. Everyone was happy with our performance at the
Roar. That shows the great job by the engineers and crew during the last
several months leading up to our first race. Thanks to all the tools we have
and the years of experience the team has with these cars, I know they’re
excited and we’re excited. Based on what we saw from our competition earlier
this month, GTLM is going to be another tough fight. It should be quite the
weekend.”


MARCEL FÄSSLER, NO. 4 MOBIL 1/SiriusXM CHEVROLET CORVETTE C8.R: "The
banking at Daytona is unique and something we don't find anywhere else. Here
at the Rolex, you really have to nurse your car for the first 22 hours to
make sure you have a car that is in perfect position to fight for victory.
We showed that was the case in 2016. You have to be super-intelligent in how
you drive the car in this race. With all the cautions you usually have here
and chances to make up ground, it's maybe not necessary to go 100 percent
all the time. That goes against the nature of a racing driver but we have
seen that is how this race can be won." 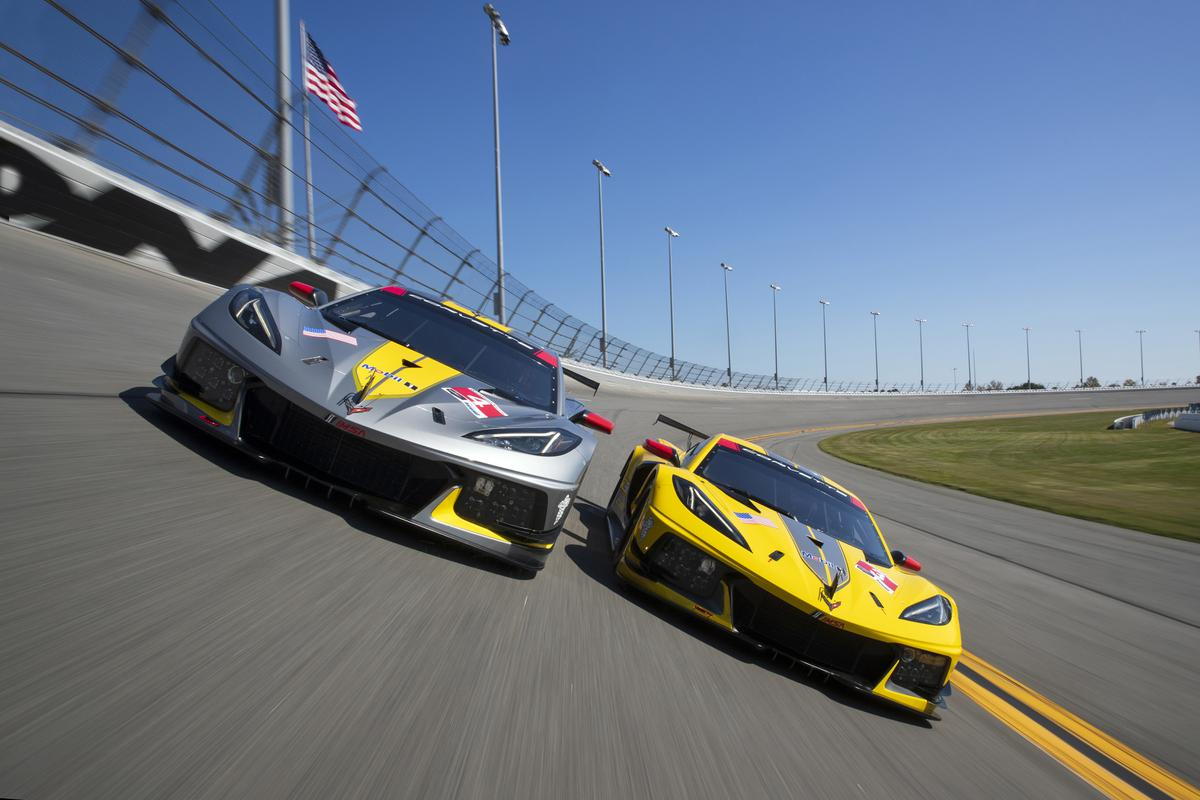