Six C8.R Le Mans drivers reflect on past week’s running ahead of 24 Hours

LE MANS, France (June 10, 2022) – All the testing, practice and qualifying sessions are in the rear-view mirror. Now it’s time for Corvette Racing to take on the 24 Hours of Le Mans and go for a ninth victory in the great endurance race.


The two Mobil 1/SiriusXM Chevrolet Corvette C8.Rs will roll off first and second from the GTE Pro grid for the first time since 2010. Nick Tandy put the No. 64 Corvette on pole position in the class Thursday, followed closely by Antonio Garcia in the No. 63 C8.R.


With the race beckoning and final prep work being completed, all six Corvette Racing drivers took stock of the week with outlooks heading into Saturday’s green flag…

ANTONIO GARCIA, NO. 63 MOBIL 1/SiriusXM CHEVROLET CORVETTE C8.R: “Now you need to put everything together… all the laps you’ve done. The last two hours of practice last night was the real warm-up of the race; that’s when you normally go and decide things about the car you will race. We have a good car, for sure. Now we have to see where the others are.”


The outlook and starting at the front: “I’m not nervous. I was way more nervous last year when we weren’t in Hyperpole and were behind seven Am cars. Last year, the pressure was up. The rain at the beginning helped as we were P2 after Lap One. But I prefer it this way! We know how well the car is running. We can’t ask for a better starting point. This is the good thing about having two cars here. We have two shots in the race, and we need to capitalize on this. It would be great if we could keep it 1-2 all the way, but now there’s not much else we can do and nothing else we can ask for.”


JORDAN TAYLOR, NO. 63 MOBIL 1/SiriusXM CHEVROLET CORVETTE C8.R: “Every year, this race starts and it’s just a dogfight from start to finish. I’m excited to get things started because I know the car is quick and comfortable to drive. All of the drivers in our car are happy with it. We’ll be in a good spot, I think. For us, the name of the game is staying out of trouble, but at the same time you don’t want to lose too much time throughout. We have a good, competitive car. It feels stronger than it did last year when we finished second, so that makes things exciting.


Can you control a race this long from out front? “The big thing with this race is that it’s always important to be at the front. You never know when you’re going to get a slow zone or safety car that can separate the field. In America, you can drop back and hope for a yellow to get things back. Here, you always try to maximize track position. Starting up front, you want to be up there in case one of those things happen. Looking at where we qualified, we definitely want to stay up there as long as possible to control things as much as we can and hope nothing out of our control takes that away.”


NICKY CATSBURG, NO. 63 MOBIL 1/SiriusXM CHEVROLET CORVETTE C8.R: “I was already more confident at the beginning of this week than last year. Now after my first days of driving, I’d say my confidence level is high. It all feels really good. I can feel the team is better prepared, and I can feel that the car is in a better window. But you can never be too comfortable. Let’s see what happens in the first few hours of the race, and then we will have a better picture of what’s going on. So far, we can only focus on ourselves and I feel like what we are doing is good. The car is good. The team and drivers are well-prepared. But it’s still a 24-hour race and lots of crazy stuff can happen. Even when you have a car that is able and capable of winning, you still need to do it. People sometimes underestimate that; they think that if you have an advantage or you have the car to win, then just win it. But it’s not like that. You still have to negotiate traffic and the race for 24 hours. Let’s see, but I’m confident.”


TOMMY MILNER, NO. 64 MOBIL 1/SiriusXM CHEVROLET CORVETTE C8.R: “To me it feels like we are the best prepared we’ve ever been with a car that is the best I’ve ever had at Le Mans. From that side of things, I’m excited for the race. Now saying all that, there are years where we didn’t have the best preparation and won, and there are years where we had great preparation and didn’t get the win. We’ve done everything we needed going into this. Like Le Mans always is, the race is its own separate beast. Having success will require using all the things we’ve learned so far, putting those to the test, not making mistakes and having a good, clean race. We’ve been fast in the practice sessions but performance in the race is what matters.”


Preparation leading up to the race: “It’s easy to say that the WEC program has helped in the current state because we’ve had a good week. There are a few areas where you could definitely say, ‘Yes having done the WEC, we are better.’ Things like pit stops and having the chance to put those to the test at Sebring and Spa.. we saw there was room to improve there, and the team did a great job to figure out how to make them faster. That’s one area. There’s a case to be made for a lot of other areas as well, but I hesitate to say that it’s necessary to do WEC to be successful here. In a lot of ways, things feel just like they always have. The attention to detail is the same, but nothing beats experience. In my view, the team is in a good place. The crew guys are happy with where things are. It’s a good place to start from.”


NICK TANDY, NO. 64 MOBIL 1/SiriusXM CHEVROLET CORVETTE C8.R: “This year does feel different to last year. We’ve obviously taken a step forward with what we know about this car and this racetrack. But also the basic preparation of the team being in this WEC paddock with this Corvette and these regulations, there is a bit of pressure off. It’s not a new environment anymore. It’s a familiar environment. We can really concentrate on the job. We have the experience of how to make the most out of the pitstops and with the way the sporting regulations work, which is different from how we normally choreograph pitstops. We have had it pre-organized and practiced. We know what to do with heated tires – these sorts of things with the WEC-specific tire compounds. It’s all these kinds of things that we’d normally experience for the first time. Now it’s in our pocket. You can see from the Test Day onward that it’s been much better preparation than in the past.”


Preparation leading up to the race: “I’m pretty sure we’re the team that has done the most laps and done the most quality running. The race is still to come. Anything can happen. But looking at how the build-up has been the last week, we couldn’t ask for more. With qualifying both cars on the front row and having really good knowledge through practice about all the different conditions as we can experience. There isn’t a great deal extra that we could have done as a team as prepare us. We have all the basics covered. Now we need to go into the race and perform and hope for a bit of luck. The drivers are ready. The car and the team are ready. Now let’s go out and win a 24-hour race.”


ALEXANDER SIMS, NO. 64 MOBIL 1/SiriusXM CHEVROLET CORVETTE C8.R: “The preparation has been really good. From the first moment I drove the car Sunday, I could tell there have been improvements in some places over last year. I would say the Corvette feels more hooked up in the Porsche Curves this year, for example. Last year it was already pretty good so it’s not like there were massive areas to improve, but that was one area where it feels a little more hooked up. The running so far has gone very smoothly. We’ve got through a lot of test items and setup work to get to a point where we are pretty happy having optimized what we can. I’m looking forward to getting into it in the race, seeing how the pace develops into the night and into Sunday.”


Can you control a 24-hour race from the front: “With a relatively small field and a 24-hour race, it may make a little less of a difference than a longer race with a bigger field. But hopefully we can stay in front for at least a few stint. There’s always a chance that a safety car comes out in the middle of the pack, and suddenly being at the front or the back makes a huge difference. You don’t rely on that scenario, but that can happen and being in the front can only put you in a better situation. It’s always better to be at the front.”


Corvette Racing will contest the 24 Hours of Le Mans on June 11-12 with the green flag set for 4 p.m. CET and 10 a.m. ET. MotorTrend TV and MotorTrend Plus will air the race live. Live audio coverage will be available from Radio Le Mans starting with Wednesday’s first official practice session. 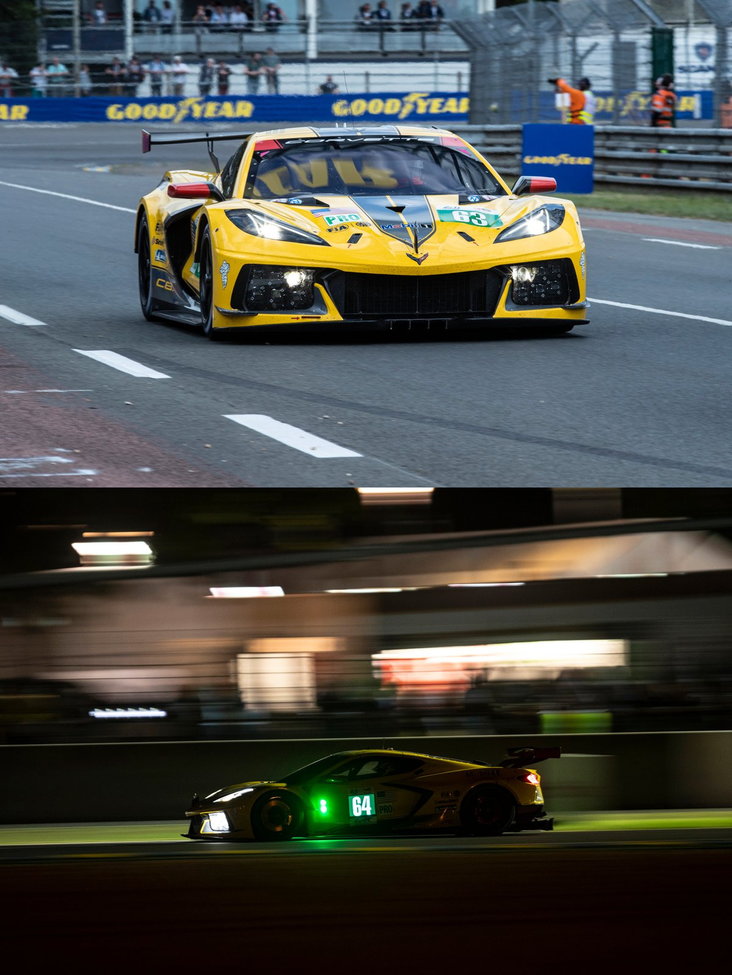