CORVETTE RACING AT LIME ROCK: Going for No. 100… Again
Sixth victory at Lime Rock Park would give team 100 victories in IMSA competition

DETROIT (July 17, 2018) – In the course of 20 years, there has been a large number of milestones for the Corvette Racing program. Of all of them, perhaps none was as significant as its victory at Lime Rock Park in 2016 – the team’s 100th victory.

Corvette Racing returns to that scene two years later in search of another milestone. A victory in this weekend’s Northeast Grand Prix for the IMSA WeatherTech SportsCar Championship will give the defending GT Le Mans (GTLM) champion its 100th victory in North America – far and away the most of any entrant in IMSA history.

The victory breakdown includes 16 in the WeatherTech Championship, 82 in the American Le Mans Series and one in the GRAND-AM Rolex Sports Car Series.

The odds of No. 100 coming again at Lime Rock are, statistically at least, better than average. Corvette Racing has won five times in 11 appearances at the 1.5-mile, seven-turn circuit that is as close to short-track track racing is it gets in the series.

In addition, Corvette Racing drivers have proven they can go fast in qualifying and in the race through the years: three class pole positions and seven fastest race laps including 2016 (Oliver Gavin) and 2017 (Antonio Garcia).

The two Mobil 1/SiriusXM Chevrolet Corvette C7.Rs arrive at Lime Rock off second- and third-place finishes in the team’s most recent race at Canadian Tire Motorsport Park. Garcia and Jan Magnussen in the No. 3 Corvette stand second in the GTLM Driver’s Championship and were runner-up at both CTMP and Watkins Glen.

Gavin and Tommy Milner scored Corvette Racing’s lone 2018 victory earlier this year at Long Beach, and they were the winners two years ago at Lime Rock. The runners-up in 2016? Garcia and Magnussen.

Another strong weekend also would aid Chevrolet’s pursuit of its 13tth Manufacturer’s Championship. Currently Chevy is second in GTLM points but only eight points from first place.

The Northeast Grand Prix begins at 3:10 p.m. ET on Saturday, July 21. Same-day television coverage will air at 4 p.m. ET on FOX Sports 1. Streaming in-car footage along with live audio coverage of practice, qualifying and the race from IMSA Radio is available on IMSA.com.

ANTONIO GARCIA, NO. 3 MOBIL 1/SiriusXM CHEVROLET CORVETTE C7.R: “Lime Rock is very different than any other circuit we have in IMSA. It is a very short lap but a lot can happen during those 50 seconds. In many ways it is one of the more difficult races we will do this season. The strategy must be perfect, and there is little time to rest except maybe on the start-finish straight depending on traffic. Plus it is normally very hot. We are in good position in the championship again. The main thing will be not to make any mistakes or do anything that will cost us points.”

JAN MAGNUSSEN, NO. 3 MOBIL 1/SiriusXM CHEVROLET CORVETTE C7.R: “Racing at Lime Rock is very difficult. Usually it is very hot and humid, which creates more of a challenge. This is as close to short-track racing as we will get all season. It reminds me of the Danish Thundersport Championship that I race in Denmark - short laps with a lot of traffic. It seems like you are always fighting with other cars. So you need to be aggressive and get through the traffic while not putting yourself in places where you can lose positions… or worse, the car.”

OLIVER GAVIN, NO. 4 MOBIL 1/SiriusXM CHEVROLET CORVETTE C7.R: “I’ve been lucky to win at Lime Rock multiple times, and I have to say that each one was a challenge. It feels like there is something always going on… whether you are overtaking or being passed. That plus the normal humid and hot conditions add another level of difficulty. This is a very big race in terms of points with so many cars close together. While you can’t win a championship here, you can definitely lose one at Lime Rock.”

TOMMY MILNER, NO. 4 MOBIL 1/SiriusXM CHEVROLET CORVETTE C7.R: “It’s always an interesting race when it’s a GT-only weekend, like it is again at Lime Rock. It gives you a little something extra to race for when you’re going for an overall win. But we can’t get too caught up in that. There are so many facets of the circuit and the race that demand focus. Traffic is usually non-stop, and the slightest contact can end your day early. It can be a very physical test too with the heat and humidity working against you, as well. It’s another great challenge that everyone at Corvette Racing is ready to face.”

DOUG FEHAN, CORVETTE RACING PROGRAM MANAGER: “We are fortunate to race on a variety of tracks on the IMSA schedule each year. Every venue offers something unique, and Lime Rock is no different. While it may look pretty benign at just 1.5 miles, it has a lot to challenge any team or driver. During the race there will be an endless number of strategy options available given the very short lap times, track characteristics and this being a GT-only race. Corvette Racing has been successful at Lime Rock in the past, including our 100th win, and the expectation is that our winning ways will continue this weekend.” 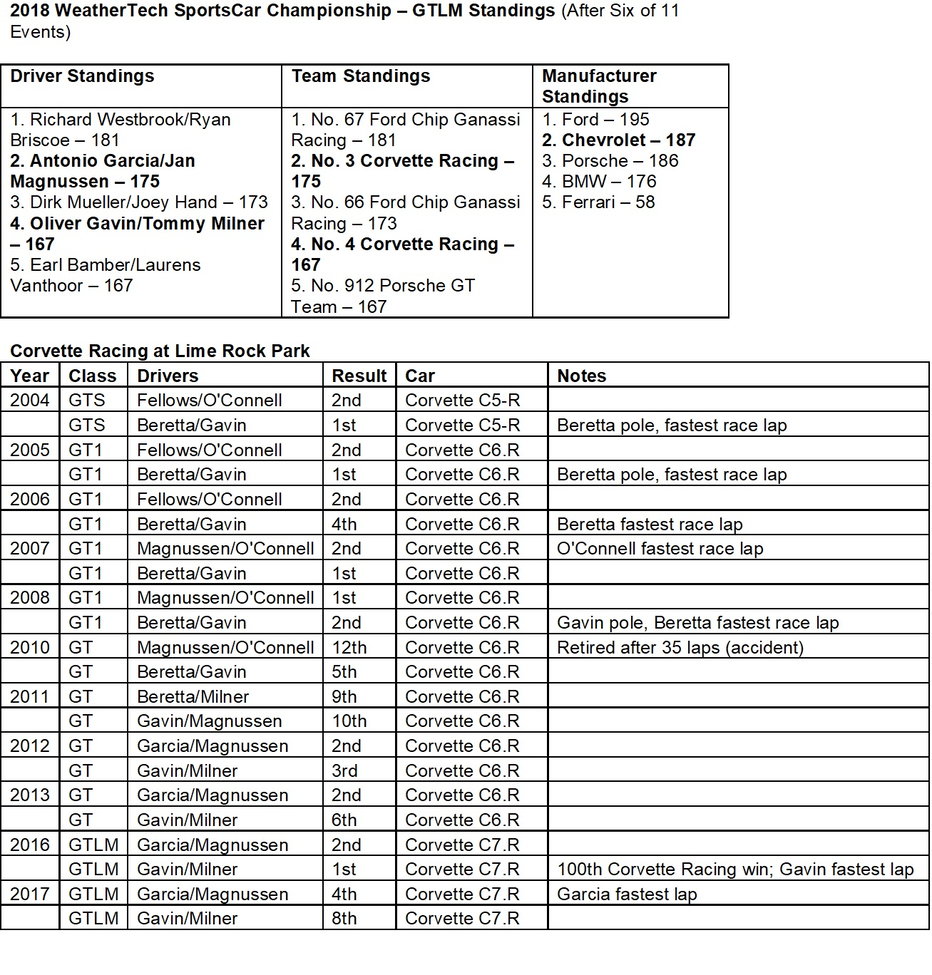