The pairing went from seventh at the race’s start to a second straight
runner-up finish in the No. 3 Mobil 1/SiriusXM Chevrolet Corvette C7.R.
Solid driving, a clever early-race strategic call and the team’s usual
excellence in the pitlane all contributed to the result.


With Sunday’s showing, Garcia and Magnussen unofficially moved to second
place in the GTLM Driver’s Championship as they seek a third consecutive
title in the category. Chevrolet also moved to third in the Manufacturer’s
Championship and one point out of second place.


From the early going, it appeared the No. 4 Mobil 1/SiriusXM Corvette of
Tommy Milner and Oliver Gavin would control the GTLM race. Milner went from
fourth to second at the start and assumed the point as officials ruled the
then-lead Porsche jumped the green flag. The No. 4 Corvette led the rest of
Milner’s 50-minute stint and remained in the best position following the
opening pit stop cycle.


Then disaster struck. Running second to Garcia, Milner reported a mechanical
problem near the one-hour mark of the race. Once back in the garage, the
Corvette Racing crew replaced the left-rear axle and sent Oliver Gavin out
for the rest of the way.


Back in the No. 3 Corvette camp, the team opted for a three-stop strategy.
Magnussen drove the first 36 minutes and handed over to Garcia on a
strategic call by No. 3 Corvette race engineer Kyle Millay. Using input from
Magnussen and with a rapidly improving track, Garcia moved into the class
lead at the end of the GTLM pit cycle.


Garcia stopped again for fuel and fresh Michelin tires with a little more
than an hour to go and this time cycled through to second place for the
final race to the finish.


The next event for Corvette Racing is the 24 Hours of Le Mans on June 15-16.
It will be the team’s 20th consecutive appearance at the French endurance
race. The next IMSA event for the program is the Sahlen’s Six Hours at The
Glen on June 30.

ANTONIO GARCIA, NO. 3 MOBIL 1/SiriusXM CHEVROLET CORVETTE C7.R – FINISHED
SECOND IN GTLM: “Most of the race was compromised from qualifying. It was a
difficult weekend. The good thing about being at the rear means you can
gamble on strategy. We knew right away what we had to do. That was the
maximum we could achieve today. It was difficult on the restart; I think I
did 50 laps during the first stint, so I think we had more knowledge on how
to drive the tire. I’m very happy for the whole team and where we ended up
but 11 podiums without a win is a little too much!”


JAN MAGNUSSEN, NO. 3 MOBIL 1/SiriusXM CHEVROLET CORVETTE C7.R – FINISHED
SECOND IN GTLM: “From where we started to where we finished, today was a
good result and good for the championship. At the beginning for me, the
balance wasn’t great and I had very little grip. We made some adjustments
for Antonio, and as the track built some rubber into it, things got somewhat
better. So we’re happy with P2. But we really need a win. I don’t know what
we need to do, but we need a win. Kyle (Millay, No. 3 Corvette race
engineer) did a fantastic job calling the strategy. I think we need to do
more of that and be brave on the strategy to try and get some wins. Podiums
get championships but so do wins!”


OLIVER GAVIN, NO. 4 MOBIL 1/SiriusXM CHEVROLET CORVETTE C7.R – FINISHED
EIGHTH IN GTLM: “It’s a frustrating day. These things happen in racing.
Sometimes you have these runs and things seem to not go your way. Tommy and
I had a good run at Long Beach, but other than that it’s not exactly gone
well for us. Today showed a huge amount of promise again. Tommy had a great
start and led. We were sitting in a nice spot and were very much in
contention after the pit stop. But the axle issue undid all that. The crew
did a great job getting the car back together to get me out there. From then
on it was a matter of collecting data for the sister car and the rest of our
events this year. It wasn’t a wasted afternoon, but it’s still not the way
we wanted to go.”


TOMMY MILNER, NO. 4 MOBIL 1/SiriusXM CHEVROLET CORVETTE C7.R – FINISHED
EIGHTH IN GTLM: “These things happen in racing, obviously. You use the curbs
a lot here, and oftentimes that’s a little more aggressive on these type
things. Usually our Corvette is bullet-proof. It happened in a weird way.
Maybe it could have been from the contact at the start when the BMW squeezed
me to the inside. It could be a lot of things. It’s unfortunate that it had
to happen. We had a really good Corvette race car. I definitely was in the
right place at the right time at the start for sure. The car was really good
in clean air. It seemed like we were really in the mix. Maybe in my case the
time in the Chevy simulator last week or two weeks ago was well spent; I
basically drove a whole day around Mid-Ohio, so I probably had a little bit
of an advantage over some of the guys who didn’t have that luxury. Those
little details matter. We were just unlucky today.” 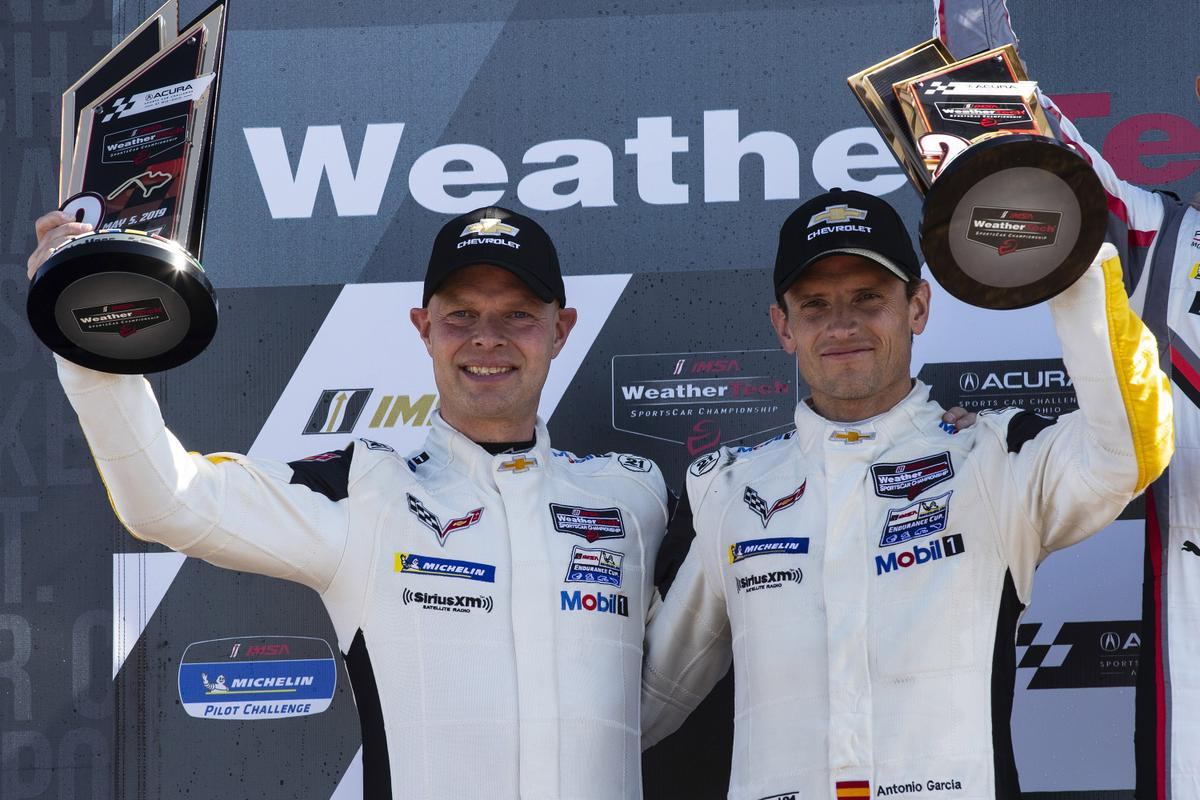