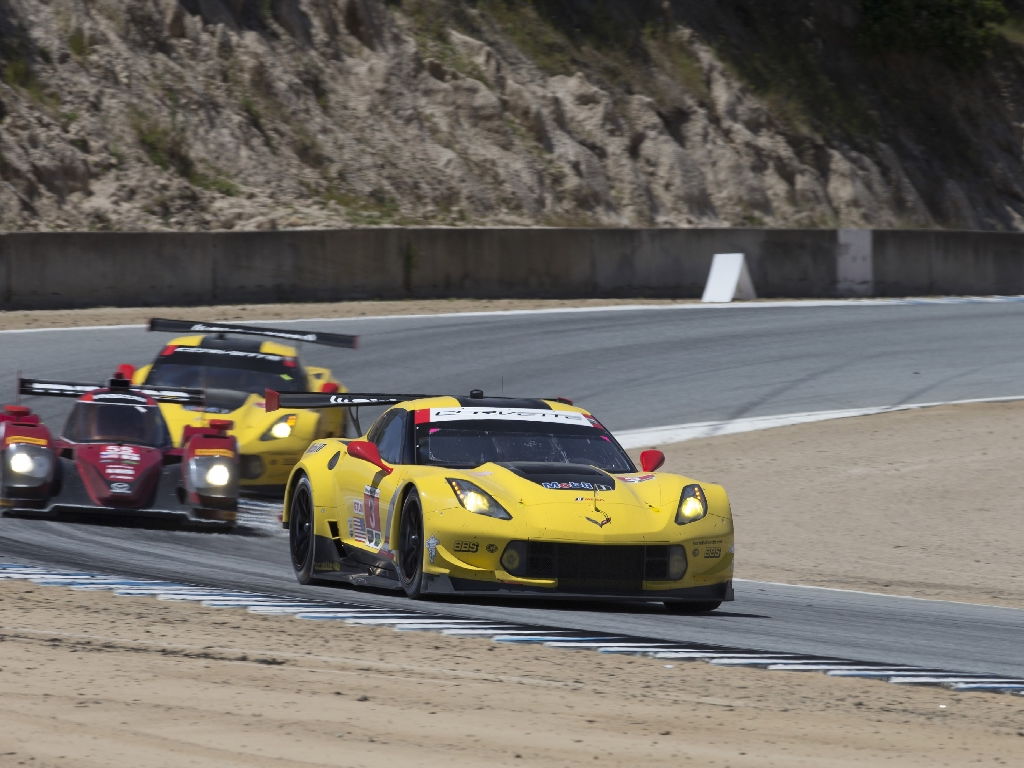 MONTEREY, Calif. (May 1, 2016) – Corvette Racing ended its early-season IMSA campaign with fourth- and seventh-place finishes in the GT Le Mans (GTLM) class in the Continental Tire Monterey Grand Prix, results that were good enough for America’s premier GT racing team and Chevrolet to retain their Driver, Manufacturer and Team points lead heading to the 24 Hours of Le Mans.

Antonio Garcia and Jan Magnussen led Corvette Racing’s efforts Sunday at Mazda Raceway Laguna Seca in the No. 3 Chevrolet Corvette C7.R. It was their best result since finishing second to open the season in the Rolex 24 At Daytona. Tommy Milner and Oliver Gavin in the No. 4 Corvette C7.R finished high enough in the order to keep their championship advantage.

Eric Curran and Dane Cameron were third in Action Express Racing’s No. 31 Whelen Engineering/Team Fox Corvette DP. That was enough to move them into the Prototype Driver’s Championship lead after four races with Visit Florida Racing now third in Driver’s and Team points. The two cars ran nose to tail for the better part of 40 minutes to close the race.

Action Express Racing’s duo of Joao Barbosa and Christian Fittipaldi in the No. 5 Mustang Sampling Corvette DP are now second in Prototype points after their seventh-place finish. Ricky Taylor and Jordan Taylor in the Wayne Taylor Racing No. 10 Konica Minolta Corvette DP unofficially sit fourth in points after a sixth-place finish. The two cars were involved in an early-race incident that sent both prototypes off track.

Back in GTLM, both Corvette C7.R teams fought back from adversity. Milner drove the first stint in the No. 4 Corvette and pitted from fifth place, and Gavin brought the C7.R back in for its last fuel fill with 42 minutes left. Unfortunately the team was called for a drive-through penalty when the Corvette’s wheels spun while it was still on its air jacks.

The result dropped Gavin back to 10[SUP]th[/SUP], but he picked up three spots in the final 39 minutes.

The No. 3 Corvette team attempted to complete the two-hour race on one pit stop, but Garcia had to come in for a splash on the final lap while running second in class. It was a testament to the strategy and fuel savings by Garcia and the No. 3 C7.R camp that the Corvette only fell two spots on the last stop.

Corvette Racing’s next event is the 84[SUP]th[/SUP] running of the 24 Hours of Le Mans on June 18-19 from the Circuit de la Sarthe in France. The team is the defending GTE Pro race-winner and is the first sports car team to win five straight endurance Triple Crown events – Daytona, Sebring and Le Mans.
Corvette Daytona Prototype teams will race in the Chevrolet Sports Car Classic presented by Metro Detroit Chevy Dealers on Saturday, June 4 from the Raceway at Belle Isle Park.

CORVETTE RACING QUOTES
JAN MAGNUSSEN, NO. 3 CHEVROLET CORVETTE C7.R – FINISHED FOURTH IN GTLM: “It wasn’t a great stint for me at the start. I didn’t really have the speed to do much other than try and keep up with Tommy (Milner in the No. 4 Corvette). I lost a lot of rear grip at the end with the new tire. It was a bit of a gamble on the fuel at the end. We lost out by a half-lap but that’s how these things go. It wasn’t the worst weekend but it should have been better for us. Now we go away and test for Le Mans. Hopefully the second half of this season will be better for us on the No. 3 car than the first half.”

ANTONIO GARCIA, NO. 3 CHEVROLET CORVETTE C7.R – FINISHED FOURTH IN GTLM: “I kind of knew when I got in the car that it was going to be a fuel race. I was already saving fuel before the team asked me to. It was tough to be surrounded by so many cars and Olly to keep the fuel usage low and still stay competitive. We almost made it. It was a shame that we lost telemetry for a number of laps. Our engineers couldn’t give me a fuel number to hit, so we were kind of guessing to see what we needed to do to go to the end. It’s a shame we had to pit with a lap to go. It’s not really nice being in pits waiting for fuel when you see the white flag waving. Sometimes the strategy works and sometimes it doesn’t. We were about a half-lap shy today. I’m happy with how the Corvette developed over the weekend. We need to keep working on these tires ahead of Le Mans. The first four races, we’ve been very competitive but just haven’t gotten the results. Getting fourth today with the extra stop is something we can be happy with.”

TOMMY MILNER, NO. 4 CHEVROLET CORVETTE C7.R – FINISHED SEVENTH IN GTLM: “It is always close in our class. That's racing. You are going to have some contact every now and then. The Ferrari and I had a little run-in there at the start which was good racing. I had to run wide there in the last corner and he could have given me a bit more room but I can't fault him for that. Like I said, hopefully no more paint. But if we have to, we will.”
HOW DID THE NEW MICHELIN TIRE WORK OUT? "Looking at practice, it seemed like the long-run stuff was going to be super important and we focused on that. The car was pretty good; I still had some issues with drive off the corners so we are still learning. It is still all brand new to us, but Michelin always brings great stuff. It is just a matter of us getting our heads around what makes these tires work and we know Corvette Racing will work hard to make that happen."

OLIVER GAVIN, NO. 4 CHEVROLET CORVETTE C7.R – FINISHED SEVENTH IN GTLM: "The No. 25 BMW didn't fight me hard near the end. Then I was catching the other BMW and the No. 911 Porsche very quickly. We were fighting so hard. Then in Turn Three, the Porsche stuck it on the inside of the BMW and the pair of them swung super wide, and I just slung-shot my way past the and that was no problem. And then I was on the tail of the Porsche, the 911. He wasn't bad but you could see that he would be good for a lap, and then he would start to go away again. I knew that if I could get myself out of Turn 10 and into 11 well I could up the inside of him. He didn't fight me hard and I got by him. Then it was a case of me pushing it. Chuck (Houghton, No. 4 Corvette race engineer) was on the radio saying that the No. 62 Ferrari and the Ford were slower. I was chasing them, but I just ran out of laps. But I certainly would have had one of them if not both. It was a frustrating day, but ultimately the guys we were fighting in the championship it wasn't bad. We lost some ground to the 912 Porsche, but we scored more points than the 911 and the 25. We didn’t make a gain but there was also no real loss in the championship today. But I felt happy and pretty comfortable with the car. That last stint it was solid to drive; the balance wasn't bad and we just had to manage the tires. But I’m frustrated about the pit stop - that just undid us. We have been so strong all year in the pits, it was just that small bobble when the car just didn't come down when we needed it to come down. These things sometimes happen. It is part of racing. Everybody will have one of those during the year."

CORVETTE DAYTONA PROTOTYPE QUOTES
MARC GOOSSENS, VISIT FLORIDA RACING NO. 90 VISITFLORIDA.COM CORVETTE DP – FINISHED SECOND: “The car came back to us during the first part of the race and we had more for them. Ryan (Dalziel) did a great job, starting from pit lane and making himself wait for traffic. I tried to do the same thing. Our pace wasn’t bad but I don’t think we had the strongest car. Then when the accident happened between the 5 and the 10, we thought we could come away with some good points. So this is really a fantastic result, and a great reward for all the work the Visit Florida guys put into working on the car and improving what we could this weekend." RYAN DALZIEL, VISIT FLORIDA RACING NO. 90 VISITFLORIDA.COM CORVETTE DP – FINISHED SECOND: “We obviously got lucky, but our race pace was quite good. We had a really good strategy to pit early and leap frog some guys. Marc had to hang on at the end. It was a really tough weekend with a lot of bad luck so we feel we deserve a podium. We’ll take it, and make the car better for the next one. We never put our heads down; we were frustrated but we focused on making it better. We’re not where we want to be yet, we still have some work to do. But we woke up this morning hoping it would be better, but I don’t think we expected this!” RICKY TAYLOR, WAYNE TAYLOR RACING NO. 10 KONICA MINOLTA CORVETTE DP – FINISHED SIXTH IN PROTOTYPE: “It’s hard to pass around here, so I finally was able to get by Christian and then I just felt a hit in the right rear going into the next corner. We were racing hard, but I think there’s a difference between getting into each other door-to-door than front-to-rear. Obviously, it’s a disappointing result but other teams that we are fighting for the championship didn’t have a great day today, either. The No. 31 (Action Express Racing Corvette DP) didn’t get as many points as they could’ve, and the No. 5 finished behind us. So we’ll go to the next race at Detroit with our great car, which is always fast there, and we’ll pick up there and take the positives we can from here. We’re just six points back in the championship, which isn’t that much. We’ve got a great team and we’re going to keep pushing. It’s still early in the year. This time last year, we were much further behind, so I think we’ve got a good chance.”