After a wild and crazy afternoon, the No. 3 Corvette team finished just
1.779 seconds from its third straight class victory. The result, though, was
good enough to increase the Drivers’ Championship lead for Garcia, Taylor
and the No. 3 Corvette C8.R team to 28 points with two races to go.
Chevrolet grew its lead in the Manufacturers standings to 16 points.


Oliver Gavin, Tommy Milner and Marcel Fässler placed fourth in class with
the No. 4 Mobil 1/SiriusXM Chevrolet Corvette C8.R. Both of the mid-engine
Corvettes led multiple times on a topsy-turvy day. Gaps between cars in GTLM
rose and fell on a whim in traffic, which wasn’t unexpected around the
challenging and undulating 2.54-mile, 12-turn road course.


Garcia began from the GTLM pole, dropped to fourth at the start but regained
the lead by the time his 94-minute opening run finished, thanks to skillful
driving and great pit work by the No. 3 Corvette crew. The team twice gained
three spots on pit stops in the race. Taylor drove a double-stint and again
pitted from the lead to hand over to Catsburg near the three-and-a-half-hour
mark for his only double stint of the race.


Taylor took back over just past the halfway point and remained in contention
into darkness before Garcia’s final triple stint to close. A full-course
caution period with 11 minutes left gave Garcia – who earlier took advantage
of trouble for Jesse Krohn’s race-leading BMW with 37 minutes remaining to
move into second place – his chance to pounce on Fred Makowiecki’s leading
Porsche.


Milner drove a triple-stint to start in the No. 4 Corvette and led twice in
his opening run after starting the race fifth in class. Fässler was in next
and kept the car in contention before Gavin got in nearly three hours in.
From that point, the No. 4 Corvette struggled to match the ultimate pace of
the race leaders, although both Milner and Fässler drove strong stints in
the race’s second half to keep the No. 4 Corvette in contention for a podium
finish to the end.


ANTONIO GARCIA, NO. 3 MOBIL 1/SiriusXM CHEVROLET CORVETTE C8.R – SECOND IN
GTLM: "The late yellows may have been the difference. We didn't have the
pace against the 24. I tried very hard in my first stint when I got back in
the car at night. We managed to gap both of the Porsches, and they went on a
different strategy than us. I got held up by the 25 BMW, and that hurt. I
don't know if he didn't know I was there. I had to pit a little sooner than
expected, and from that point we were on the back foot. My middle stint
wasn't as good compared to the 911, and even if I picked up the pace at the
end of the stint then it wasn't enough. I couldn't defend against him when I
came out of the pits on cold tires (with 45 minutes left). Without a yellow,
it would have been a question as to who would make the tires last the
longest. We were both pushing hard. There was a chance for us but it was
another second at Petit Le Mans. Looking back at the season, if this is a
bad result then I will take it! We are in good shape for the championship.
From that standpoint, we can be very happy of the consistency and being able
to fight at every single race. We'll go and try to win the last two and
close it out."


JORDAN TAYLOR, NO. 3 MOBIL 1/SiriusXM CHEVROLET CORVETTE C8.R – SECOND IN
GTLM: "That was a tough race, but was a good day overall for Corvette
Racing. When you look at the whole day, it was pretty flawless for the No. 3
side – no issues on the track, no issues in the pits, perfect strategy and
perfect in the pits. To come away with P2 is great. It's good for the
points. But you always want to win these big ones when you have the
opportunity. I think if we had gone green at the end then Antonio would have
had something for the 911. It was unfortunate to see it go yellow at the
end, but overall it was a good day."


NICKY CATSBURG, NO. 3 MOBIL 1/SiriusXM CHEVROLET CORVETTE C8.R – SECOND IN
GTLM: "It was a nice race but very busy. It's cool to be on the podium at
this event with this car, this team and these teammates. Somehow it feels
like we could have gotten a win, but I'm still happy with P2. It's been a
good event for us. The team and drivers did a faultless job. Maybe we didn't
have the pace at the end, but this was still a cool event for us. I had a
moment with one of the Porsches that went too far in my opinion. He was
racing like it was the last lap of the race and was pretty unacceptable. I
think he got a drive-through penalty for it. But other than that I was quite
happy with the double-stint I did and am looking forward to being back in
the Corvette at Sebring."


OLIVER GAVIN, NO. 4 MOBIL 1/SiriusXM CHEVROLET CORVETTE C8.R – FIFTH IN
GTLM: "This was the most difficult Petit Le Mans that I've ever done. I've
had hurt ribs after an incident biking earlier this week. I felt good
around Wednesday but it became apparent Thursday that it was going to be a
struggle in the car. I received a number of different treatments trying to
get as comfortable as possible with the goal of doing a stint or two in the
race. It just was too much pain and discomfort in my stint and we elected to
get Marcel back in during the caution. He and Tommy did an amazing job under
the circumstances, especially in a race as unpredictable as Petit Le Mans.
Thanks to them and the team for all the effort and encouragement. We'll try
to get back on the right track at Laguna Seca later this month."


TOMMY MILNER, NO. 4 MOBIL 1/SiriusXM CHEVROLET CORVETTE C8.R – FIFTH IN
GTLM: "We just weren't good enough today. It was tough and frustrating. At
times the car was good. It looks like we were off a little bit there at the
end pace-wise compared to everyone else. We were hoping for a yellow late
and got it, and thought we could have done something with it. I maybe had an
opportunity or two with the 24 in the first few corners but it would have
probably been more crashing and mayhem; it wasn't worth running somebody off
the road just for a spot. That's not how I like to race. We'll learn what we
can, go to Laguna Seca and try again."


MARCEL FÄSSLER, NO. 4 MOBIL 1/SiriusXM CHEVROLET CORVETTE C8.R – FIFTH IN
GTLM: "My first run in the race was quite good, but I think I pushed a
little too hard on the tires because they dropped off toward the end. That
meant I struggled with some pace. The middle stint was good, and I was happy
with the balance of the Corvette. The night portion was quite tough because
somehow I couldn't get the front tires to work. It was an issue and I lost a
lot in traffic. We were hoping for an earlier caution to help us out. It was
not easy out there with the traffic. But the Corvette C8.R showed it has
great pace. The pit stops were perfect all day, and the team had a great day
in the championship. I'm looking forward to Sebring and hoping we can have a
better run and be back on the podium in the No. 4 Corvette." 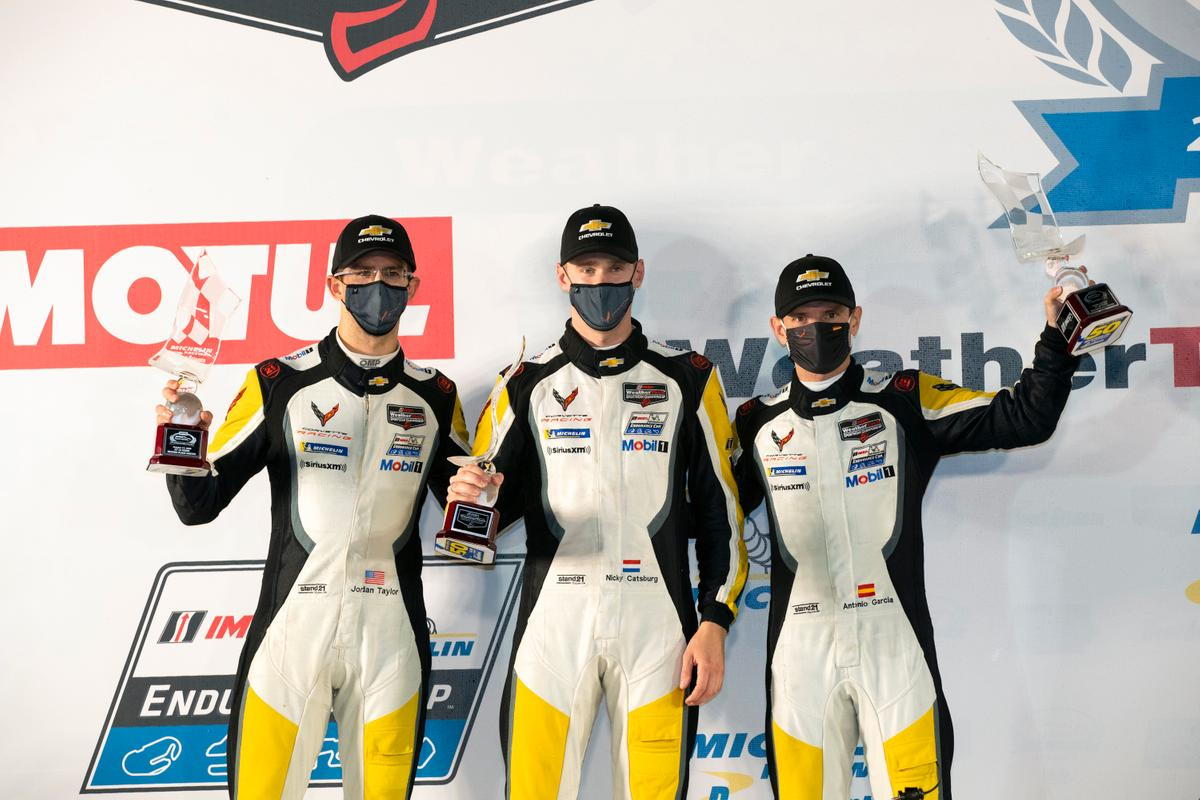